Rubio vs. Portman -- up close

The two front-runners to be Romney's No. 2 speak. Guess which one some found lacking enough "Star power"? 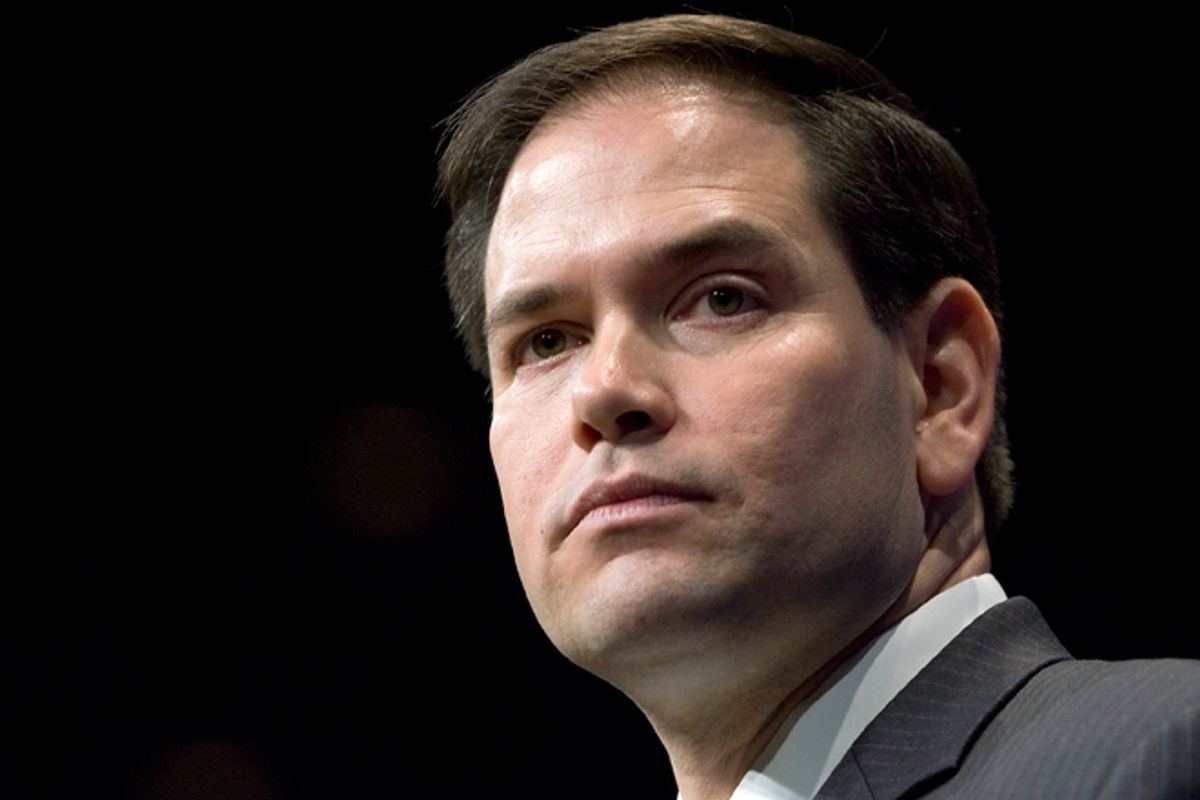 While it's impossible to gather an entire movement into one room, the annual Faith and Freedom Coalition conference aims to bring a representative sample of the Christian right to Washington. The question hanging over the ballroom at the Renaissance Hotel downtown this year is, "Who will Mitt Romney choose as his vice-presidential nominee?"

That's because the conference convened today with back-to-back speeches from two senators widely assumed to be on the short list for the nod: Marco Rubio of Florida, and Rob Portman of Ohio. And while neither addressed a potential vice presidency in their remarks to the lunch crowd, or with reporters after, the contrasts were clear.

Portman has held so many jobs in Washington -- budget director and U.S. trade representative under George W. Bush,  along with senator and congressman -- that he joked today, "The honest truth is that I can't hold a job." The quip was typical of Portman's remarks: humble and self-deprecating in a way that betrayed his Midwestern roots. It's no wonder he's often described as "vanilla," despite his penchant for whitewater kayaking. When a swarm of reporters asked him after his speech whether he was being vetted by the Romney campaign for the V.P. slot, he replied, "I hate to be boring, but we don't talk about that."

But boring may be Portman's strongest selling point. The thinking here goes that Romney needs to appeal to moderates who may be turned off by his foray into the far right during the GOP primary, and that someone like Portman would help assuage those concerns. Safe, experienced, competent is how he might be sold.

Rubio, meanwhile, represents something entirely different for the party. The young Cuban-American senator who took down the party establishment's pick in the 2010 primary is a kind of transformational leader that brings a tear to the eye of activists like Sally Campbell, who spoke with Salon after his speech. "Marco Rubio is an honest to Jehovah God person. ... He is growing, growing, growing -- I'm sorry," she said, apologizing for getting a bit choked up. "He is growing and blossoming into something that is really extraordinary, and I like extraordinary because this country is extraordinary and it deserves an extraordinary leader."

In his remarks, Rubio spoke with a passionate eloquence that has been compared to Barack Obama's, who was also once a two-year senator with national ambitions. Where Portman's speech was intimate, Rubio's was epic: "What's truly at stake in 2012 and years to come is not just which party controls Washington, or which leader gets in the White House. What's at stake is our very identity," he said. Putting the year in the context of grand sweep of history, he continued, "The only thing standing between us and a new American century is our willingness to get there."

Rubio himself has addressed this difference, telling the Weekly Standard, "I’m not a Rob Portman in terms of experience around this place."

But the biggest contrast between Portman and Rubio came after their speeches in dealing with the press. Portman met the scrum of reporters and fielded questions for over eight minutes, long after his handlers declared, "That's it, guys" and tried to drag him away. One got the sense that he could have stayed all afternoon, brushing off the tough questions and teeing off on the soft ones.

Rubio, on the other hand, who owes a good deal of his success to the media raising his profile, did not take a single question. While Portman spoke in the hallway, we found Rubio at what was billed as a signing of his new memoir in front of a giant and well-lit background with the Faith & Freedom logo. We were told to stand inside the velvet ropes, quite literally penned in. It turned out he was actually signing book plates, not books (which hasn't been released yet). After a few awkward moments of silence, someone finally blurted out, "How does it feel being vetted by the Romney campaign?" The senator smiled and chuckled lightly, but did not look up from his work. His only words were to make a joke about book plates: "You should read the book plate, it's a lot shorter than the real book," he said, turning it over to prove the point.

Ralph Reed, the founder of Faith & Freedom and the man running the show, wouldn't say. “It’s Mitt Romney’s choice, not mine,” he told Salon. “He’s got an embarrassment of riches to choose from."

Ken Blackwell, a longtime activist from Ohio who spoke before the senators today, likes Portman. “Rob Portman brings a set of experiences and interests that he could really play off,” he said. He also mentioned Mitch Daniels, the governor of Indiana, but not Rubio. “I don’t think you can get much stronger than Rob Portman,” he added.

Later, I assembled a focus group of activists (actually, I stumbled across them already speaking): Campbell, the state chairman of the Mississippi chapter of the Faith & Freedom Coalition; Janice Johnson, an activist and political consultant from Tennessee; and Tony Nasvik, the president of the Wisconsin chapter of the organization.

Everyone liked both candidates and others such as Louisiana Gov. Bobby Jindal or bellicose Florida Rep. Allen West, but agreed that Portman lacks something: "Star power." “He’s great, but he’s not going to be in the top five for me. He’s phenomenal and I support the guy and I think he’s tremendous," Nasvick explained: “But he doesn’t have the star power that West and Rubio have,” Johnson chimed in. “Yeah, unfortunately. It’s guys like you," he said pointing at notepad. "We’ve got to watch out to make sure we’ve got the image, the whole package. I’d rather do the picking in the completely dark room!”