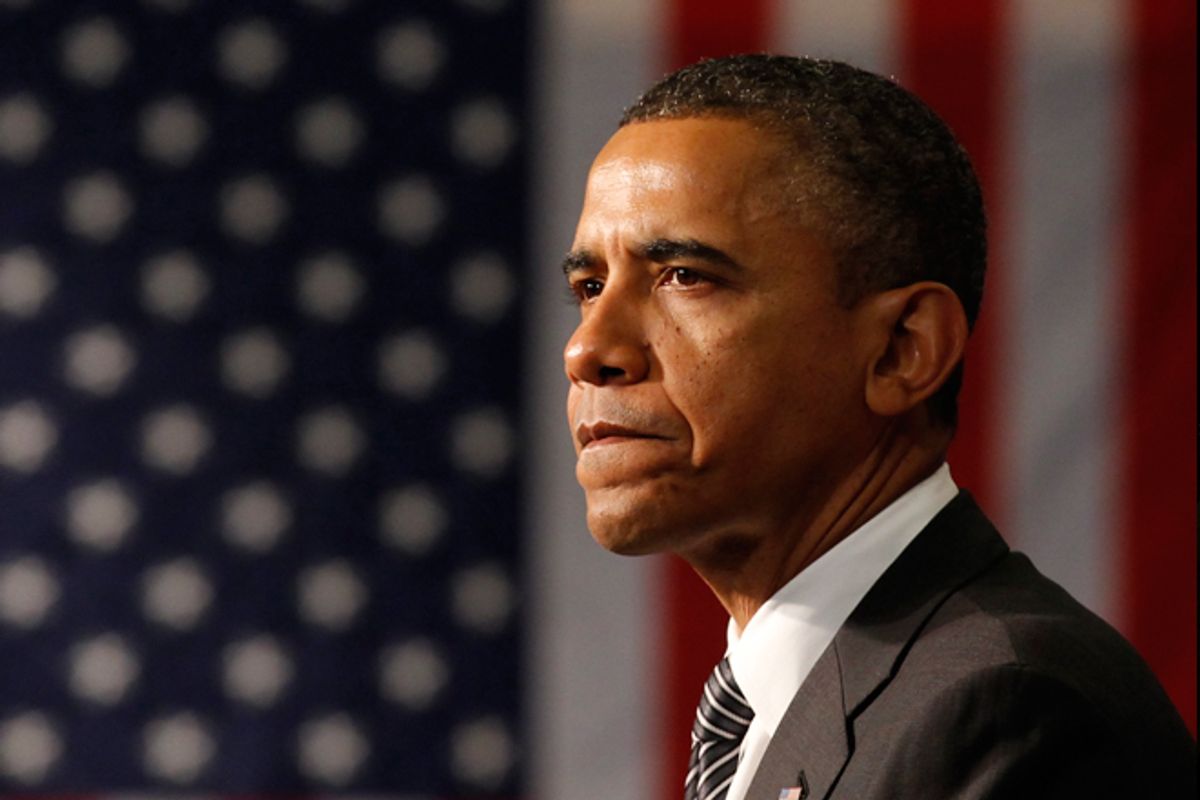 Excerpted from “The Obamians: The Struggle Inside the White House to Redefine American Power."

On December 9, little more than a month after Election Day, the director of the Central Intelligence Agency gave President-elect Barack Obama a rather astonishing demonstration. The CIA director, a bald-headed, bespectacled former Air Force officer named Michael Hayden, had flown to Chicago to brief Obama and his top aides for the first time on American intelligence operations around the world. It was a long session, more than two hours. Hayden ran through America’s covert intelligence activities, country by country and program by program, a tour d’horizon of the innermost secrets of American foreign policy.

Hayden saved the most sensitive part of his briefing for the very end. It covered the CIA program for combating terrorists, the program known to intelligence officials as RDI — rendition, detention and interrogation. These were nice, antiseptic words for a tough reality: The CIA snatched up suspected terrorists around the world, turned them over to other countries or brought them to secret American-run camps, and tried to get them to talk. The program had been, for several years, the subject of international protests, congressional investigations, news stories and political attacks, including direct criticism from the successful Democratic presidential candidate. Barack Obama had, only a year earlier, called the Bush administration’s interrogation program “an outrageous betrayal of our core values.”

Carefully, Hayden began to give an overview. He was talking about the policy of handing suspected terrorists over to friendly intelligence services in places like Egypt and Jordan, when Vice President-elect Joseph Biden interrupted him. As chairman of the Senate Foreign Relations Committee for the previous two years, Biden was more familiar with foreign policy issues than others on the new Obama team. Biden was polite but unmistakably skeptical. Come on, he said to Hayden. You turn these guys over to other countries so that they can be tortured. “Mr. Vice President, that’s not true,” Hayden answered. The CIA bore moral and legal responsibility for what happened to everyone subjected to rendition. “You can disagree with the policy, but we did not move them because they can be tortured,” he insisted.

Though Hayden didn’t explain it, this was as much a disagreement about semantics as about actions. The word “torture” carries serious legal implications. Torture is prohibited by, among other things, the United Nations Convention Against Torture, the Geneva Conventions and the Universal Declaration of Human Rights. The Bush administration, from the president on down, had repeatedly held to the line that whatever had been done did not amount to “torture.” And by extension, it stuck to the position that the policy of rendition, turning prisoners over to other countries, was not for the purpose of torture. Biden was speaking in plain English, Hayden in the CIA’s standard legalistic formulations.

The session in Chicago was merely one step in a quiet campaign mounted by CIA officials during the period between Obama’s election and his inauguration. Privately, Hayden and some senior intelligence officials had a name for it: the “Aw, Shit!” campaign. The idea was to make incoming Obama officials realize that they needed to be pragmatic; that the realities of American foreign policy didn’t fit into the world as they had imagined it from the outside. Once Obama and his aides realized the hard truths of what American policy required — so it was hoped — the incoming officials of the new administration would say to themselves, “Aw, shit!” and abandon the positions they had taken before coming to office.

Meanwhile, Hayden himself was hoping to stay on in the job at the CIA. Obama wasn’t buying the idea that he should retain Bush’s CIA director. In early January, the Obama team came up with a surprise appointment from outside the intelligence community. He nominated Leon Panetta, an old Washington hand who knew little of the internal workings of the CIA, but was perfectly positioned to protect the agency from attack. At his confirmation hearing, Panetta promised what he called a “new chapter” for the CIA. That particular metaphor was, as it turned out, revealing. He was not proposing to rewrite the entire book.

Still unsettled, however, was the question of what would happen to the interrogation techniques Hayden had demonstrated to Obama in Chicago. The CIA wanted to keep the program going.

A couple of weeks before Obama’s inauguration, Hayden was summoned to a meeting with several members of the incoming Obama team to review the program. The key figure was Greg Craig, who was about to become Obama’s White House counsel. He again stressed the modifications he had made in the program over the past two years. What you all think you have to do with this program to curb abuse, we already did that in 2006, Hayden told the others.

On January 20, 2009, Barack Obama took the oath of office as the forty-fourth president of the United States. His speech was mostly about the nation’s deep economic crisis. In the section about foreign policy, he declared that “We reject as false the choice between our safety and our ideals.” It was a vague but unmistakable reference to the Bush administration’s interrogation and detention policies.

The CIA waited to hear what the new administration would do in its first days in office. The rumors had been swirling: The new president was going to sign an executive order barring all humiliating and degrading treatment of detainees. The order would require the CIA and all other U.S. government officials to abide by the rules of the Army Field Manual, which sets out guidelines for non-coercive interrogation of all prisoners.

Hayden was trying to cultivate Craig, seeking to develop a friendship. Still, neither Hayden nor others at the CIA had been asked for formal comment on the draft executive order on interrogations. After Obama was sworn in, Hayden called up Craig. “I hear the president’s going to sign an executive order banning the CIA’s interrogation techniques,” he said. “True,” replied Craig. “Well, Greg, not that you asked, but this is the director of central intelligence, officially nonconcurring,” Hayden said.

But Hayden wasn’t finished. How about just adding a few words to the executive order, he suggested: All interrogation would be under the rules of the Army Field Manual “unless otherwise ordered by the president.” That would at least leave a certain ambiguity, so that prisoners being questioned by the CIA wouldn’t know how far the interrogators could go. Hayden was trying to preserve the CIA’s authority through the time-honored loophole of claiming presidential authorization for something otherwise prohibited.

On January 22, the president signed the executive order without the Hayden suggestion that would have undercut it. Hayden immediately wrote a message to the CIA workforce, telling them the agency would abide by the new interrogation rules set by the Obama administration, just as the CIA had carried out the different rules set by the Bush administration. The message said the CIA would comply “without exception, carve-out or loophole.”

Hayden made still one more try. The following day, he asked to see the new president after the regular morning intelligence briefing. There are some issues in the executive order that still need to be clarified, he said. The new rule applied to all “agents” of the United States, and Hayden said he assumed the intent had been to cover employees of the American private contractors that had been working for the U.S. government. But what if the CIA authorized a foreign government or a friendly intelligence service to capture someone and detain him? Did Obama’s new executive order cover a foreign intelligence service? “Mr. President, if it does, I need to tell you that we don’t have a partner service from Marrakesh to Bangladesh that is going to adhere to the conditions of confinement inside the Army Field Manual.”

Hayden’s effort to preserve the interrogation techniques was a classic example of the ways in which America’s permanent government bureaucracies, like the CIA, maneuver to win over a new president and to preserve the status quo. Indeed, the dispute over interrogation was merely the opening skirmish in a much broader struggle over the degree to which the Obama administration would change the direction of American policy and how much it would accommodate to the existing order.

Within weeks, Hayden was gone, replaced by Panetta. Yet in a larger sense, the “Aw, Shit!” campaign lived on and, in quite a few instances, succeeded. Other intelligence officials continued to resist changes in the status quo, intrusions on the CIA’s independence or efforts to investigate what the agency had done during the Bush administration.

The Obama administration decided to preserve — or, in some instances, expand — many parts of the counterterrorism program it had inherited from the Bush administration. Obama kept the CIA’s program of rendition. He accepted and perpetuated the practice of indefinite detention, without trial or sentencing, for those prisoners believed to be especially dangerous terrorists.

Even more important, Obama maintained and gradually expanded the practice known as targeted killing. Indeed, the following year, the president began to brag about how much better his administration was in this endeavor than the Bush administration.

Excerpt from “The Obamians: The Struggle Inside the White House to Redefine American Power." Copyright © James Mann, 2012. Viking. On sale June 14, 2012.

James Mann, a former Washington reporter, columnist, and foreign correspondent for the Los Angeles Times, is author in residence at the Johns Hopkins School of Advanced International Studies. He is the author of many books on global affairs and U.S. foreign policy.