Frat-boy conservatism in the Rose Garden

The right pretends to respect authority – except when it's held by a Democrat. Just look at the Obama heckler today 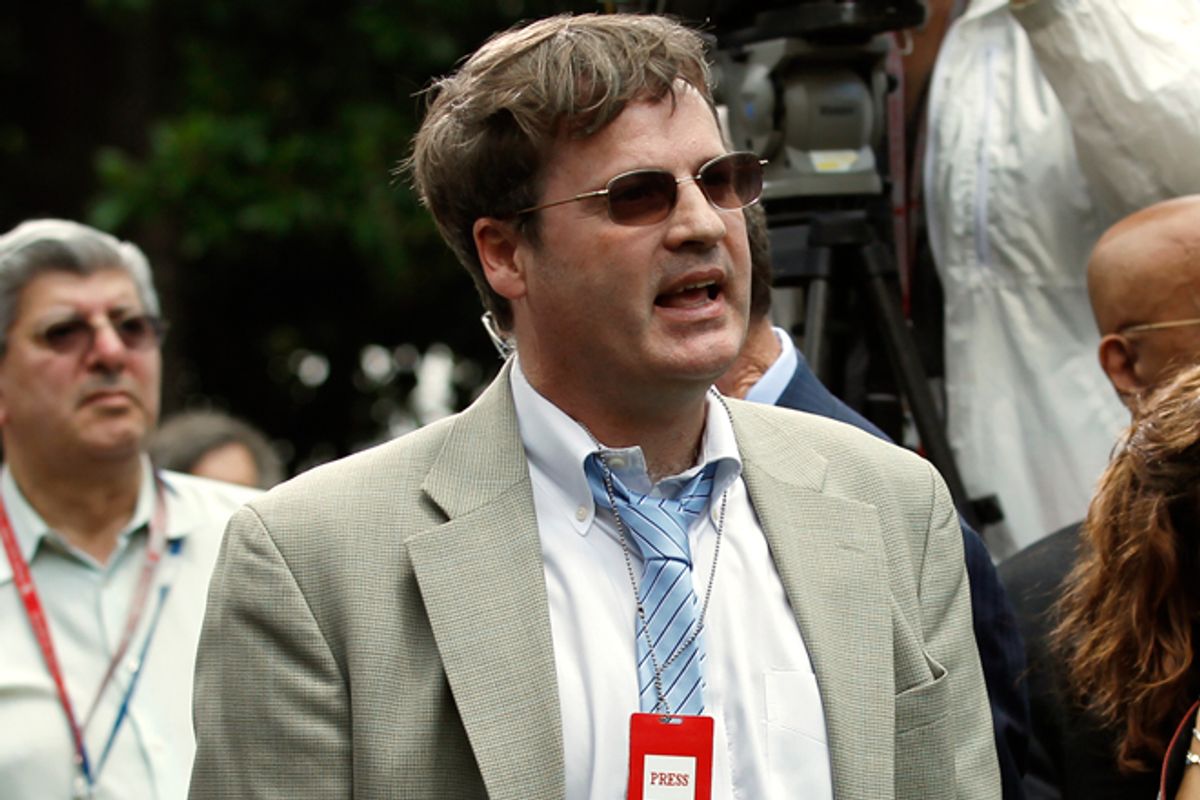 Daily Caller "reporter" Neil Munro heckled President Obama near the end of his remarks announcing an executive order stopping the deportation of young people whose parents brought them here illegally. Munro shouted, “Why do you favor foreigners over American workers?” while reportedly identifying himself as an immigrant. He describes himself as "born Irish, then became a Cold War bridegroom" on his Twitter profile. If only Obama had proposed a green-card dating service instead of his Dream Act workaround.

The visibly angry president smacked down Munro. "The next time I prefer you let me finish my statements before you ask a question," Obama said. He then walked out of the Rose Garden without taking any queries from reporters.

I'm not one to revere the imperial presidency, but it's unbelievable how wingnuts treat this man with such unprecedented and bullying disrespect: from Rep. Joe Wilson screaming "You lie" during Obama's 2009 speech to a joint session of Congress, to Speaker John Boehner denying him his choice of dates for another congressional address (for the first time in history) last fall, to Donald Trump's persistent, humiliating demands for the president to show him his papers (with no rebuke from ally Mitt Romney). And for right-wingers who insist Democrats are too quick to cry racism: Really, what else explains this constant, in-your-face (literally) contempt for a president?

Certainly they disrespected President Clinton, too, but never with such in-person abuse. Clinton was impeached after a political witch hunt and treated poorly even by the so-called liberal media, but he was never stalked into the Rose Garden or congressional chambers and heckled, as Obama has been.

Conservatism has always been associated with deference to authority, but lately it's only for authority they respect. The Romney campaign has been glorying in this new form of frat-boy conservatism, first sending campaign supporters to heckle Obama adviser David Axelrod during a press conference, and yesterday sending its bus to circle and disrupt an Obama event, honking its horn. It reminds me of the famous "Brooks Brothers riots" in Miami during December 2000, when supporters of George W. Bush threatened to physically prevent county officials from recounting votes in that heavily Democratic stronghold. Of course, it also harks back to Romney himself in prep school, tackling a gay classmate and cutting off his long blond hair while he cried and asked for help.

It's no accident that Munro works for bow-tied, sexually anxious bully Tucker Carlson, who famously (but not believably) boasted of beating up a gay man who made a pass at him in a men's room, and admitted that when he hears Hillary Clinton speak, "I involuntarily cross my legs." Jon Stewart called him a dick eight years ago, and he's only gotten worse. This is your modern Republican Party, folks. It only gets worse.