Jim Messina's old boss once denied involvement with a homophobic ad. A new profile suggests they knew all along 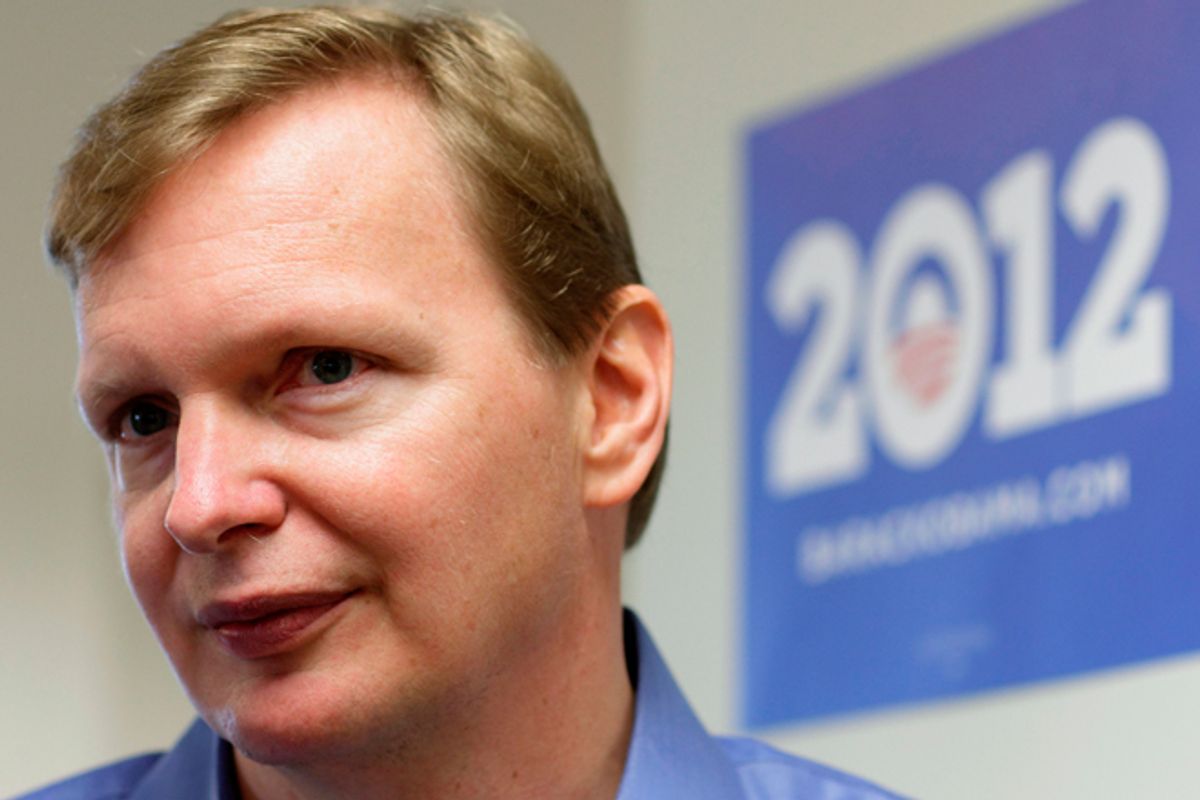 In their quest to promote themselves as political tough guys, did Sen. Max Baucus and President Obama's campaign manager Jim Messina just admit to both crafting one of the most homophobic ads in American history and possibly committing a crime? That's the big question after new revelations buried in this week's fluffy Businessweek profile of Messina.

Here's the back story: In the annals of political television advertising, very few spots are so indelible as to be considered iconic, and almost all of those are national presidential ads, like the 1964 Johnson campaign's "Daisy" spot; the 1988 Bush campaign's racially charged "Revolving Door"; and the 2004 Swift Boat Veterans for Truth attacks on John Kerry's war record. Arguably the only congressional ad to ever reach such rarefied air was the 2002 Democratic Senatorial Campaign Committee spot against Montana Republican Senate nominee Mike Taylor.

Thanks to the deliberate choice of music, the footage of man-on-man physical contact and the voice-over message, the ad is considered the epitome of homophobic demagoguery -- a spot ostensibly about Taylor's Department of Education loans, but really designed to raise questions about Taylor's sexuality in a culturally conservative state. Summarizing the national uproar over the ad, the Denver Post at the time noted that "only the most naive adult would miss the implication that Taylor is a homosexual" and that clearly "the supposedly inclusive Democrats deftly played on the right's homophobia."

When Taylor subsequently dropped out of the race, Baucus meekly defended some of the substance of the loan allegations in the ad. (Messina worked as Baucus' chief of staff at the time.) However, he vigorously and repeatedly denied any involvement in the spot. It was a classic example of the tired old misdirect whereby a politician denies he has anything to do with a third-party attack on his opponent.

As the Billings Gazette reported at the time, Baucus "stressed he had nothing to do with the ad" and that "the party did its own research and produced the ad."  Baucus almost certainly issued such blanket denials both because he didn't want to be tagged as an anti-gay bigot, and because even back then, before the McCain-Feingold campaign finance reform legislation, it was blatantly illegal for a candidate and his campaign to directly "coordinate" ads paid for by political party organizations like the DSCC. (As the ACLU noted at the time, under both pre- and post-McCain-Feingold FEC statutes and court rulings, independent expenditures must be "made without any coordination with a candidate's campaign.")

Now fast-forward to a key passage in this week's fawning Businessweek profile of Messina:

Messina will go a long way to win, as (stories) from his Montana career suggest...

The other story involved his Republican challenger, a state senator named Mike Taylor, who was the target of an ad so devastating it got national attention. The ad charged Taylor with having embezzled student loans from a cosmetology school he’d owned in the 1980s. But its force lay in the music and imagery. Set to a porn soundtrack, it featured snippets of an old television ad for Taylor’s hair salon that showed the candidate clad in a medallioned, open-shirted disco outfit, massaging lotion into another man’s face, and then appearing to reach toward the man’s crotch, as a narrator intoned, “Not the way we do business in Montana.”

“Jim is tough,” Baucus says. “I’ll never forget when he showed me that ad. We were in Bozeman in a motel. The curtains were drawn. He said, ‘Max, what do you think?’ They were afraid I wasn’t going to like it. I loved it!”

So to review: To protect himself politically and legally, Baucus in 2002 insisted he knew nothing about -- and had nothing to do with -- the ad. Now in 2012, in his eagerness to promote his pal Messina, Baucus admits that, at minimum, he and Messina knew all about the ad -- indeed, Businessweek explicitly credits Messina with being the architect of the ad, citing it as proof that he "will go a long way to win." Likewise, Baucus now admits that he wasn't unaware of the spot -- on the contrary, he explicitly told his staff he "loved it." Additionally, while the timing of the meeting Baucus details in comparison to the ad's air date isn't clear, Baucus' comment about the secrecy of drawn curtains and his staff being "afraid" he wouldn't like it begs us to ask if his campaign manager and staff quietly showed it to him in order to get his official prior approval for it to air on television.

Now, sure, it's easy to write this off as old news, but it's more than relevant to this current political moment -- and not merely because the ad in question is the single most infamous congressional ad in contemporary history.

First and foremost, it shows that only a few years ago, a leading Democratic U.S. senator -- one who voted for the odious Defense of Marriage Act and who is up for reelection in 2014 -- was happily cheering on homophobic demagoguery.

Additionally, it raises questions about whether both a sitting senator and President Obama's campaign manager blatantly flouted campaign laws about coordinating independent expenditures from party committees -- laws that are designed to prevent candidates from circumventing campaign fundraising laws and airing ads with unregulated soft money.

And perhaps most important, it shows that all of these possible transgressions are no longer even seen among our political elite or media watchdogs as politically, morally or legally troublesome -- they are instead seen as something for those elites to actively brag about, and for political reporters to venerate. Indeed, Businessweek's Joshua Green was so intent on publishing a hagiography of Messina, he didn't even bother to ask the critical follow-up questions about the Messina ad at issue.

But those questions still need to be asked -- even if their answers are inconvenient.