Housing is still a huge economic problem, and the president is at odds with Fannie Mae over how to fix it 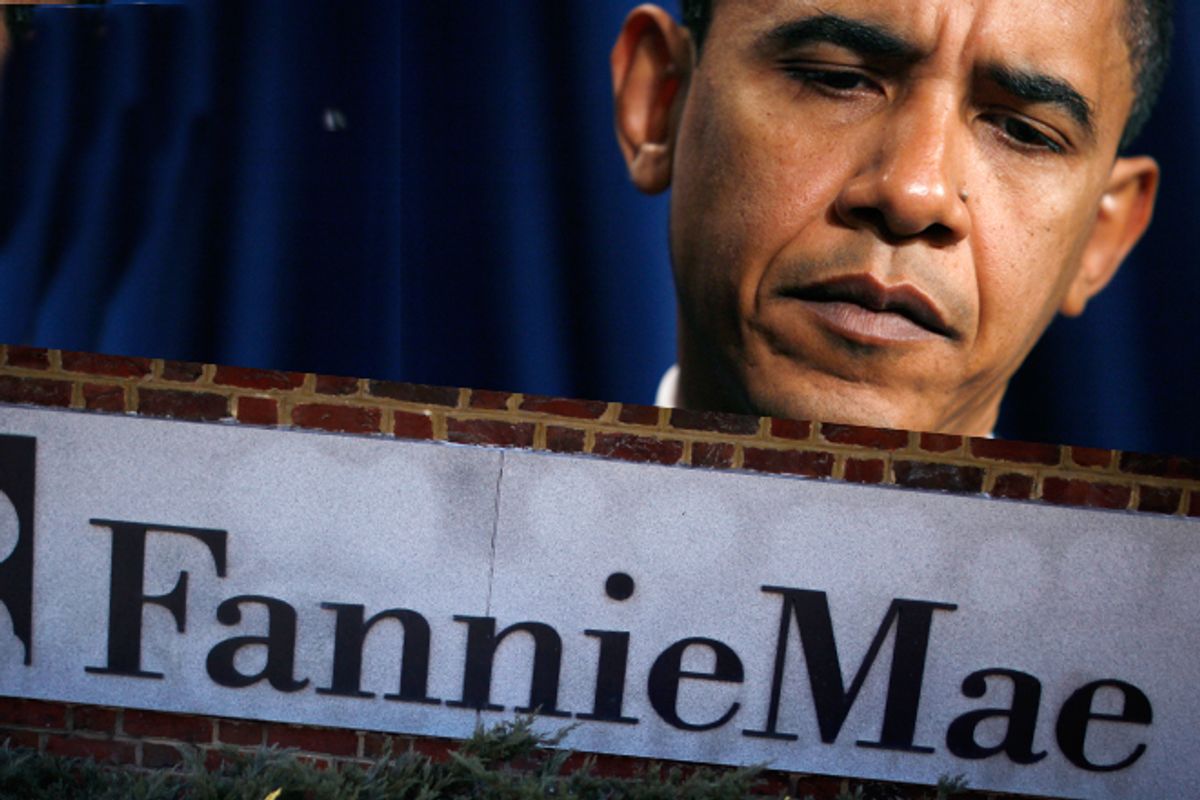 Amid all the rhetoric and posturing that have accompanied every twist and turn of the great housing bust and the ensuing slow, stuttering recovery of the United States economy, a comment made last week by new Fannie Mae CEO Tim Mayopoulos to the Wall Street Journal might have seemed consequential only to the most wired-in housing wonk. "From my perspective, I don't believe we need principal reduction to modify loans and make [modifications] work for homeowners," Mr. Mayopoulos said.

Don't push that snooze button! The jargon might be thick, but in the middle of a massive foreclosure crisis, Mayopoulos' comments spoke directly to the most contentious issue in housing finance policy today: how to keep Americans in their homes. It's a question that divides not just Democrats and Republicans, but also the executive branch of the government itself. Because you can make a good case that for all practical purposes Mayopoulous works for the federal government; and yet, his position on "principal reduction" is at direct odds with President Obama's. That's a big deal. The collapse of the housing sector precipitated the economic crash. Fixing it is crucial to enabling a sustainable recovery. And yet, despite years of effort, in the all-important domain of housing finance, the White House has proven itself unable to execute its agenda.

Principal reduction (or, as it is sometimes more coarsely known, "cramdown") allows homeowners who are "underwater" on their mortgage -- i.e., they owe more to the bank than their home is worth -- to get real relief and avoid possible foreclosure. Simply put, the owner of the mortgage agrees to "write down" the amount owed by the borrower, so the mortgage shrinks in size to match what the house can be sold for.

One out of every five Americans with a mortgage owes more than their home is worth -- that's 10.7 million mortgage holders with a total negative equity of $700 billion. When you're underwater on your mortgage, it is very difficult to refinance. Many housing activists -- joined relatively recently by the White House -- have long believed that the best way the government can end the housing crisis and ease mass economic hardship would be to convince -- or force -- mortgage-owners to grant large-scale principal reduction to millions of underwater homeowners.

Estimates vary widely on the economic impact of principal reduction, but an aggressive effort to ease the burden of negative equity by Fannie Mae could affect millions of homeowners. Fannie Mae is the largest owner of mortgages in the United States. Along with its sibling mortgage giant, Freddie Mac, it accounts for about half of all the mortgages in the U. S. -- a massive amount of loans worth around $5 trillion. Which means Tim Mayopoulos' opinion carries serious weight. If he steered Fannie Mae in the direction of principal reduction he could help bring an end to the ongoing foreclosure nightmare and spur a true housing sector recovery. But right off the bat, Mayopoulos made clear that principal reduction is not on his to-do list.

And here's the rub. The Obama administration wants -- or says it wants -- principal reduction. And for all intents and purposes, the government owns Fannie Mae. Originally a quasi public-private entity referred to with the weasel words "government-sponsored enterprise," Fannie Mae was essentially nationalized during the housing crisis in a bailout that cost taxpayers hundreds of billions of dollars.

You buy it, you own it, right? So how is it possible that the new CEO of an institution that is basically a fully taxpayer-funded government agency can be directly at odds with White House policy?

Over the past year, a narrative has emerged, fueled by White House leaks and congressional denunciations, that holds one person responsible for the Obama administration's failure to get Fannie Mae and Freddie Mac to engage in principal reduction. His name is Edward DeMarco, a lifelong career government bureaucrat who currently serves as the director of the Federal Housing Finance Agency -- the regulator charged with overseeing Fannie and Freddie.

DeMarco has been steadfast in his opinion that principal reduction is a bad idea. His reasoning is straightforward: Principal reduction, he argues, would mean further financial losses for Fannie and Freddie, which would then have to be made up by taxpayers. Since the FHFA is not only Fannie and Freddie's regulator, but their conservator as they try to emerge from bankruptcy and pay back the government for its bailout, DeMarco's legal responsibility, as he sees it, is to steer Fannie and Freddie back to profitability.

DeMarco's numbers have been challenged; many housing activists argue that, in the long run, foreclosures cost more to administer than renegotiating mortgages with principal reduction. Furthermore, they argue, taxpayers will benefit more from an improving economy spurred by significant housing relief than from a profitable Fannie Mae and Freddie Mac.

The details get pretty wonky. But the big picture is this: By his own account, DeMarco is very pleased with the choice of Mayopoulos to run Fannie Mae. So the most significant aspect to Mayopoulos' ascension to the CEO position and his ensuing comments is in how they bolster DeMarco's apparent ability to resist pressure from the White House and congressional Democrats. That pressure has been fierce. Led by Elijah J. Cummings, the ranking Democratic member of the House Committee on Oversight and Government Reform, and with support from Shaun Donovan, secretary of Housing and Urban Development, DeMarco's critics have, over the last few months, pressed him vigorously. On May 1, Cummings released documents that purported to show that FHFA's own research had concluded that principal reduction would save Fannie and Freddie money. But so far, the attacks have made little impact.

In this narrative, congressional Republicans play a supporting role aiding and abetting DeMarco's supposed obstructionism. DeMarco is only the acting director of the FHFA. In 2010, President Obama nominated his own pick for the job, North Carolina banking regulator Joseph Smith, but Senate Republicans blocked it. Richard Shelby, R-Ala., the ranking member of the Senate Banking Committee, based his opposition specifically on his belief that Smith would force banks to offer principal reduction. In the conservative ethos, principal reduction is just another bailout for homeowners who have only themselves to blame for getting in over their heads.

Sound familiar? Obama wants to do right by the country, but is blocked by Republicans protecting banks. We've seen this before, right?

But there are some problems with this narrative. First off, there's the niggling issue that for the first two years of his administration, during which Obama had the greatest latitude to execute his agenda, the White House did not vigorously support principal reduction as a way of addressing the crisis. Mortgage lenders hated the idea of "cramdown" and the administration did not press the issue. Indeed, Obama is actually technically responsible for appointing DeMarco to his position as acting FHFA director in August of 2009. It was only after the 2010 midterms, when Obama lost his ability to push legislation through the House, that his administration started to take a more aggressive tone on principal reduction.

As for Republican obstructionism, Obama's critics argue that he could have replaced DeMarco with a recess appointment, or simply fired him for not following administration policy. This is another contentious point. The director of an independent regulator like FHFA is supposed to only be firable for "cause" and it's not clear that a disagreement on housing policy finance fits that category. But the critics say that's just quibbling. Bruce Judson, a former senior faculty fellow at the Yale Management School, who writes frequently on housing issues in a regular column for the Roosevelt Institute, believes Obama could get his way, if he really tried.

"If he wanted DeMarco out, he would be out," said Judson. "But Obama has never said 'this man is not serving the country, I am asking for his resignation.' Do you think DeMarco could last a minute in Washington after that?"

DeMarco has even flipped the table on Obama, and argued that the real problem with principal reduction is that it would be another big giveaway to the banks, a theory that has gotten some prominent media play. The four biggest banks own a massive amount of secondary loans on underwater properties, and according to DeMarco's reasoning, it will be easier for them to collect on those loans if the principal involved in the primary mortgage gets written down.

Some circumstantial support for DeMarco's position can be found in the fact that William Dudley, president of the New York Federal Reserve Bank, supports principal reduction, as does Treasury Secretary Timothy Geithner, who himself was once president of the New York Fed. Both men are not known for their willingness to go against banking industry interests. But the plot gets muddled here: Republicans are opposing Obama on principal reduction because they worry that the White House will force banks to take losses on their loans, while DeMarco is suggesting that principal reduction is yet another bank bailout? They both can't be right at the same time.

The explanation that seems the most likely is that as it became clear over the course of the Obama administration that White House efforts to help homeowners avoid foreclosure were not working very well -- and the results of the midterm elections sent a strong message that Democrats needed to get more populist -- Obama and his advisers decided to get a little more aggressive on housing finance. But in classic Obama fashion, they didn't get aggressive enough to do themselves, or homeowners, any good. They didn't pick a real fight. They've made incremental changes in their various foreclosure avoidance plans that increase the incentives for banks and mortgage lenders to make loan modifications and perhaps even offer some principal reduction, but not enough to make a significant difference in the lives of enough Americans to end the foreclosure nightmare.

There's even a nightmare scenario in which the entire fight over principal reduction becomes, in Judson's words, "irrelevant."

That's because, says Judson, tax law historically treats principal reduction as income to the homeowner who gets it. In other words, if you have a $300,000 mortgage on a house that is now only worth $200,000, and your bank gives you a $100,000 break to bring the mortgage and the home value in line with each other, the IRS will consider that $100,000 break taxable income.

Congress recognized this obvious insanity in 2007 and passed a provision that gave homeowners a waiver from that liability, but the waiver will expire on Jan. 1. Not only would the change in tax law mean that getting a principal reduction would make no sense for a beleaguered homeowner, but it would also destroy the market for "short sales" -- in which banks allow homeowners to get out of their mortgage by selling their property for less than the mortgage is worth. Judson believes some 30 percent of home sales are currently short sales. Knock the legs out of that market, and you're asking for serious trouble.

"If we hit a train-wreck on Jan. 1," says Judson, "it will take the housing market and any economic recovery down with it."

Sounds bad -- but right now, not only are very few people even warning about the possibility; Republican legislators are saying they oppose extending the waiver.

So the morass continues -- and the more you know about how housing finance policy works, the more screwed up our economy's chances of ever fully recovering seem to become.