Romney gets DREAMy on immigration

After repeatedly vowing to veto the DREAM Act, the candidate suggests he has no problem with Obama's new policy 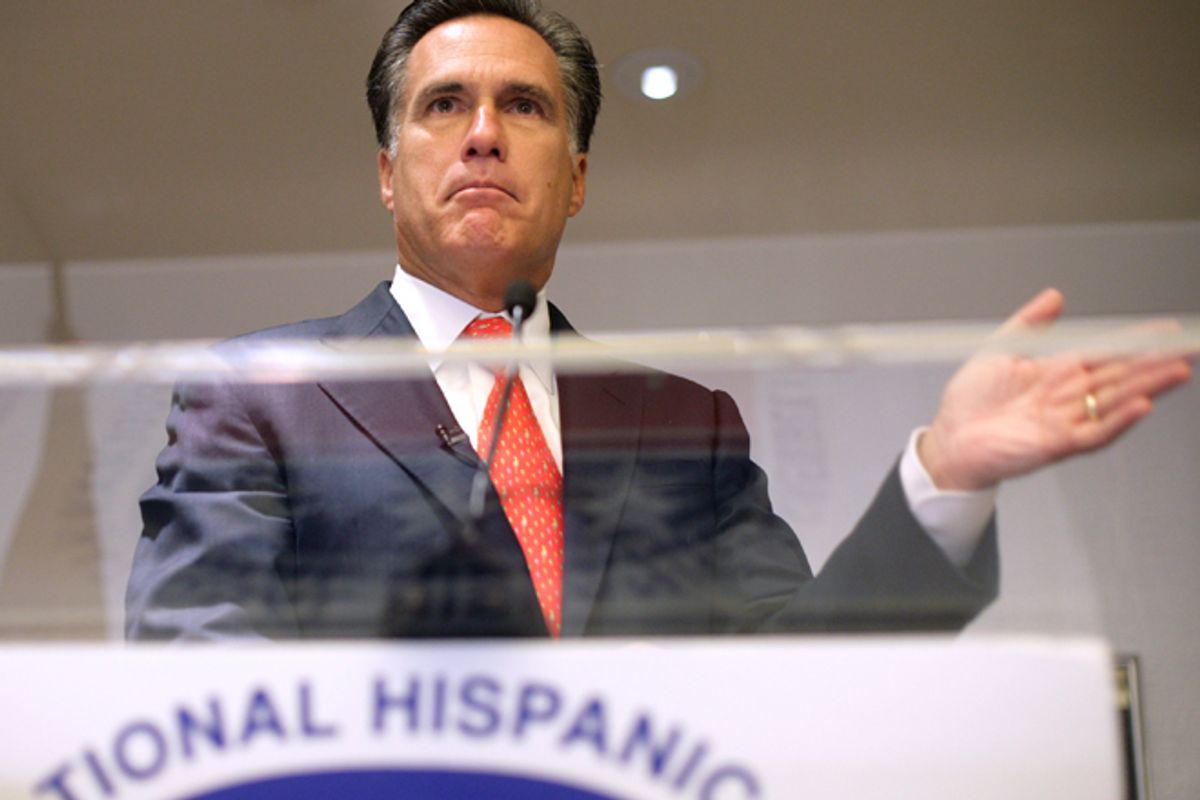 Fire up the Etch a Sketch.

After spending the entire GOP presidential primary affirming his hard-right immigration policies, Mitt Romney took several steps to the left today while responding to the Obama administration's new deportation policy, which is similar to what the DREAM Act would do.

Obama announced the administration would stop deporting young undocumented immigrants who meet certain criteria. Romnney indicated, surprisingly, that he has no problems with the policy itself, just the process by which it was implemented. Campaigning in New Hampshire this afternoon, Romney said, "I think the action that the president took today makes it more difficult to reach that long-term solution because an executive order is, of course, a short-term matter and can be reversed by subsequent presidents." He added, "I would like to seek legislation that deals with this issue and I happen agree with Marco Rubio — as he looked at, considered this issue, he said that this is an important matter that we have to find a long-term solution."

Rubio, the Republican senator from Florida who has been leading the GOP's efforts to smooth things over with Hispanic voters, took a very careful position earlier in the day. Rubio embraced Obama's policy -- which is very similar to a bill Rubio himself has been pushing -- while also criticizing the president for circumnavigating Congress. “Today’s announcement will be welcome news for many of these kids desperate for an answer, but it is a short-term answer to a long-term problem,” he said. “And by once again ignoring the Constitution and going around Congress, this short-term policy will make it harder to find a balanced and responsible long-term one.”

Romney's endorsement of Rubio's approach is a fairly major break from the immigration policy the former governor advocated just a few months ago. "And I have indicated I would veto the DREAM Act," Romney said during a Fox News debate in January. Responding to another candidate's more liberal position, Romney said, "I think that’s a mistake. I think we have to follow the law and insist those who come here illegally ultimately return home, apply, and get in line with everyone else." Romney especially savaged Texas Governor Rick Perry for being too soft on immigration. "I will not do anything that opens up another wave of illegal immigration," he added. Indeed, Perry's immigration stance helped lose him the nomination. Romney reaffirmed the veto threat several times later, prompting undocumented immigrants to follow Romney around chanting, "veto Romney, not the DREAM Act."

Romney even refused to endorse Rubio's approach just two months ago. Which raises the question: When Romney complains that Obama's approach is bad because a future president could reverse it, does he mean himself?