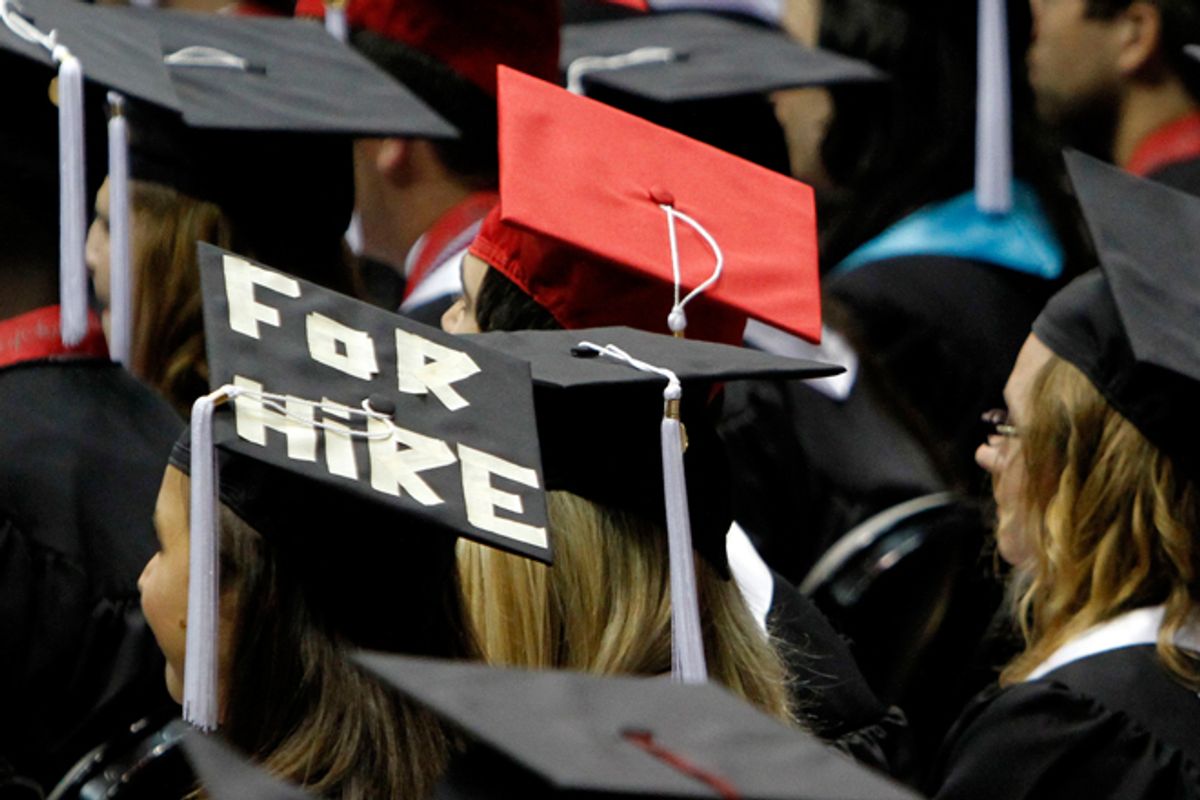 "I have a Tuition Answer Loan from Sallie Mae. I knew I was in for trouble when the fines for late payments were taken out in limbs from my body and I had to sign the paperwork in blood."

I have only read a fraction of the thousands of comments submitted to the Consumer Finance Protection Bureau in response to the government agency's request for information about the general public's experience with private-sector student loans. But I think I can safely identify a few main themes.

1) Dealing with Sallie Mae, the nation's largest provider of private student loans, seems to be an unpleasant experience for many people.

2) The most common adjective used to describe how it feels to watch one's outstanding amount of debt rise even as one scrimps and saves and hustles to make payments is "hopeless."

3) The educations paid for by student loans may not have left many Americans well-prepared for finding a job that comes with a salary high enough to pay off their loans in a lousy economy, but hundreds of thousands of people have definitely mastered a few things about how the world works. Specifically: There's a big difference between government and private-sector loans; high interest rates are a killer; and private lenders do not have your best interests at heart.

Sadly, most of the respondents to the CFPB's request for comments were unable to express themselves in the same tone of bleak, black humor as the respondent whose words kick off this post. (Another comment from the same person: "To compare my feelings for Sallie Mae, think of it this way ... entities such as cancer [and] HIV at least have some treatments and cures!") The vast majority of people who took the time to submit their comments are simply stuck and looking for any help they can get. They're unemployed or working at minimum wage jobs, and they feel duped. The parents who co-signed their loans are now getting harassed by collection agencies. They're angry at a government that was quick to bail out the banks but seems to be standing by while an entire generation gets crippled by debt.

Most of the comments that I read came from people who do take responsibility for their debt. They just wish they'd been better informed as to what they were getting into when they were 18 years old and signing on the dotted line. They feel that financial aid counselors did not give them the full scoop on the difference between government and private loans. They are shocked that the same lenders who were so eager to shower them with cash turned so cold and inflexible when hard times made repayment near impossible. They are rueful, stressed and disillusioned.

"We all invested in the 'American Dream,' and now that dream has transformed into a Debt Nightmare."

"I am frustrated and upset that I did not understand the full implications of this loan when I received it."

"I graduated 3rd in my high school class, in the top 10% of my undergraduate class (1st in my major), and did relatively well in law school. I do not feel as if I am entitled anything ... however, I did not expect to struggle so much as I move into my 30-somethings. I question whether my education will be worth it in the end, as I struggle to stay afloat. I am forced to search for higher paying employment outside of the career path I hoped to follow. Until I do find higher paying employment, my life will continue to be in a holding pattern where I live paycheck to paycheck so that I can pay off my educational debt."

"Sometimes I don’t eat dinner or lunch for a few days so I can afford to pay the loans. I try to avoid bothering my elderly grandmother, who co-signed a loan, with harassing phone calls telling her that creditors will come for her and her money if her grandson doesn’t pay his bill."

"These companies are disgusting and predatory. If Goldman Sachs can get a bailout of trillions with no strings attached, why can’t I get $50,000 so I can actually buy a house and spend money on the local economy instead of sending my money into a black hole of a bank?"

"When I was eighteen, I did not understand the difference between a private and a federal loan. Every adult I knew was in some kind of college debt, and I accepted that I would be, too."

"When I went to college I didn’t realize that I was making a choice between owning a home and going to school. The amount of debt I have is practically insurmountable and will take my entire life to pay off."

"I am not asking anyone to take on my debt or erase it the way the gov't has for the banks. I am asking my gov't to stand up for its constituents by lowering these high-interest-rate products that are criminal in nature."

And so it goes, on and on and on. A generation of Americans who feel trapped and hopeless and for whom the words "Sallie Mae" have become a curse.

Just for laughs, I checked out what Sallie Mae had to say in its own submitted comment:

Sallie Mae is pleased to respond to your ― Request for Information Regarding Private Education Loans and Private Education Lenders‖ (RFI). Our 40 years of experience helping students and their families save, plan and pay for college have provided insights and learnings that have informed our practices and that we hope will also benefit you ...

We believe the study of the private education loan market mandated by the Dodd-Frank Wall Street Reform Act provides an excellent platform to examine the significant and structural changes to the education loan marketplace that have made it a model for disclosures, borrower rights, and consumer protections, all the while helping students and families fill the gap between grant aid, federal loans, and the cost of education.

"A model for disclosures, borrower rights, and consumer protections." I don't think you need a college education to evaluate the sincerity or accuracy of that description of the private-sector loan market.