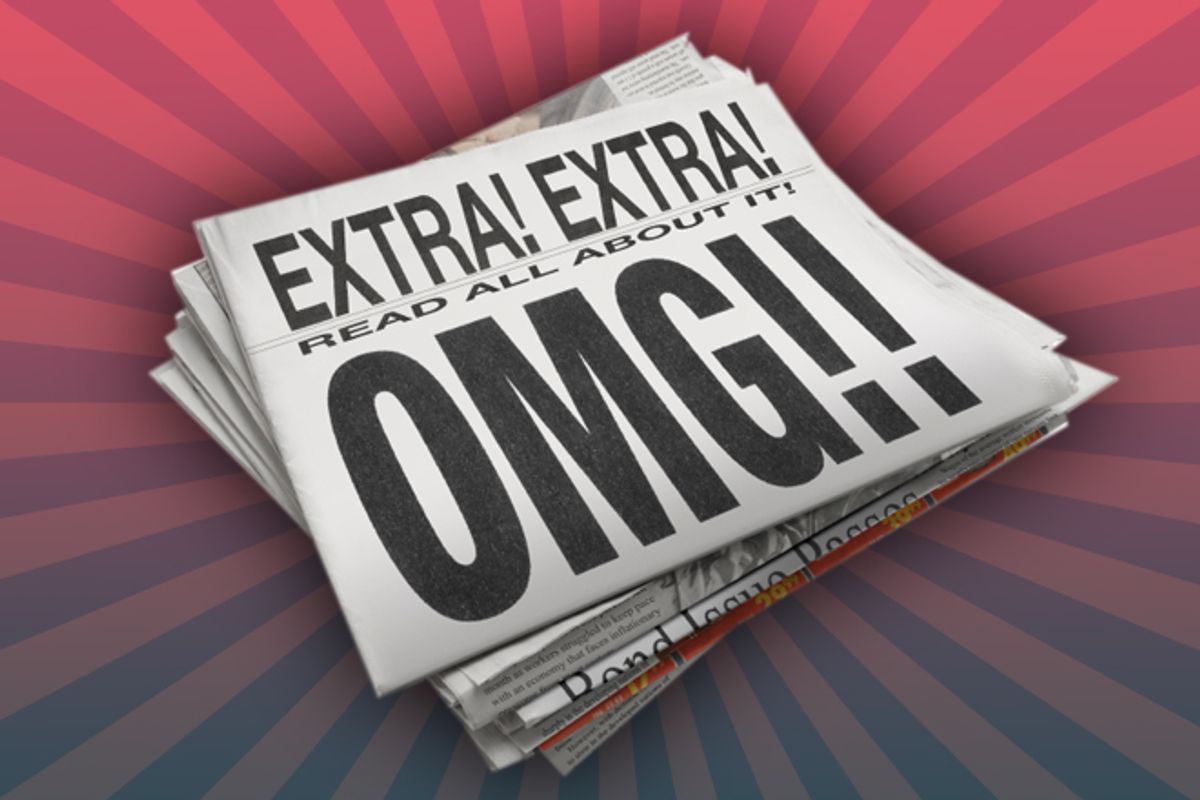 We’re very much trapped in the horse latitudes now – the winds are calm, and the storms we all know are coming are, for the most part, scheduled for weeks or months from now.

Hey, journalists: This is a very, very dangerous time for you. Know it. Be careful.

Here’s the story. First of all, the whole political world is, basically, in hurry-up-and-wait mode right now. One huge story, at least, will break soon; the Supreme Court decision on the Affordable Care Act will show up sometime in the next couple of weeks, although two weeks is still an eternity of time on the cable news networks.

All of this creates a whole lot of reporters with little to report on – and a whole lot of empty time on the cable news networks, the newspapers, the blogs, the new talk radio shows and the rest of it.

And what academic research tells us is that slow news days create scandals. That’s what Brendan Nyhan and other media researchers have found; indeed, Nyhan believes that the lack of scandal during Barack Obama’s first two years in the White House was caused, at least in part, by a series of very eventful news cycles. The mechanism, obviously, is that if there’s no major news, then minor news fills the hole, and if there’s no minor news, then we’ll hear plenty about stuff that if you squint just the right way might sort of pass for news. Here’s Nyhan, writing last year about Obama:

Just as slow news periods seem to encourage scandal coverage, my research shows that pressure from competing stories diverts attention and media resources that could have been devoted to negative coverage of the administration, reducing both the likelihood of presidential scandal and the volume of coverage those scandals receive. In Obama’s case, it is clear that external events have consumed much of the news agenda over the last 18 months, including the Deepwater Horizon oil spill, the Arab Spring revolts, the shooting of Rep. Gabrielle Giffords, the earthquake and tsunami in Japan and the killing of Osama bin Laden. The saturation coverage that these stories received left little room for scandal, particularly given the volume of debate over the merits of the president’s legislative agenda and his confrontation with the new Republican majority in the House.

Overall, Nyhan found that several factors make it more likely that the press will feature scandal coverage – other key variables are the opposition party’s dislike of the president (so George W. Bush was unlikely to have a scandal soon after the Sept. 11 attacks, when Democrats approved of his presidency), and the time since the last scandal, which seems to leave the press increasingly hungry for more. But if we control for those, then whether or not there’s other news seems to make a big difference.

It’s no surprise that mid-summer, when lots of newsmakers are on vacation (and when little is happening even in the sports world), is when stories such as the "ground zero mosque" or Shirley Sherrod’s supposed racism took off. Not just those; any kind of meaningless hype, whether it’s a supposed gaffe or some meaningless polling random variation, is going to get far more attention than it deserves.

Of course, it’s certainly possible for scandals to dominate the news in the rest of the year – Iran-Contra, one of the biggest, broke in November 1986, and many of the Watergate firestorms happened in the fall or spring. But those deserved their coverage. The "ground zero mosque"? Some of the campaign gaffes we’ve seen this spring and summer already, from “Etch-A-Sketch” to “fair” – not so much.

So what should reporters, editors and producers do about it?

First of all: Be aware. That gaffe that you think is election-changing? Probably going to be forgotten in three weeks. That story that seems just perfect to fill a slow news day? Wait a second – where did it come from, and does whoever produced it know that you’re just itching for something good to cover today? Granted, newspapers and cable news networks can’t just shut down until the real news starts up again, and some of this is inevitable, but a little self-skepticism is probably a good antidote to the understandable impulse to hype whatever you’ve got.

Second: substance, substance, substance. The candidates really do have positions on issues of public policy. They really would enact them if elected. Some of those are, I promise, about things that will affect readers and viewers in fascinating ways. You’re not going to be able to fit much of that in once the fall campaign starts; between polling (much more meaningful then, by the way), and charges and countercharges, and whatever other real news is out there. This is a great time to get a little substance reporting in. Hey, another advantage: It’ll pay off for reporters who actually know the issues in the fall.

And one more: Can I recommend … House and Senate elections? That’s almost 500 elections; add the governors, statewide and local propositions, and even some other down-ballot races, and you have a ton to work with. Any reporter who can’t find a number of fascinating stories in all of that isn’t worth much. Bonus: They’re actually important. More important, certainly, than Ann Romney’s hobbies or whether Democratic back seat drivers are happy with the direction of Barack Obama’s campaign.

Mostly, though, this is just something that we have to get through, and it’s going to be easier if everyone involved – including readers and viewers – knows what it is and adjusts expectations accordingly. But it would be nice if reporters at least try not to succumb to the worst of it.