Are farmers markets bad? Two scientists argue "food miles," the distance from farm to plate, is a worthless measure 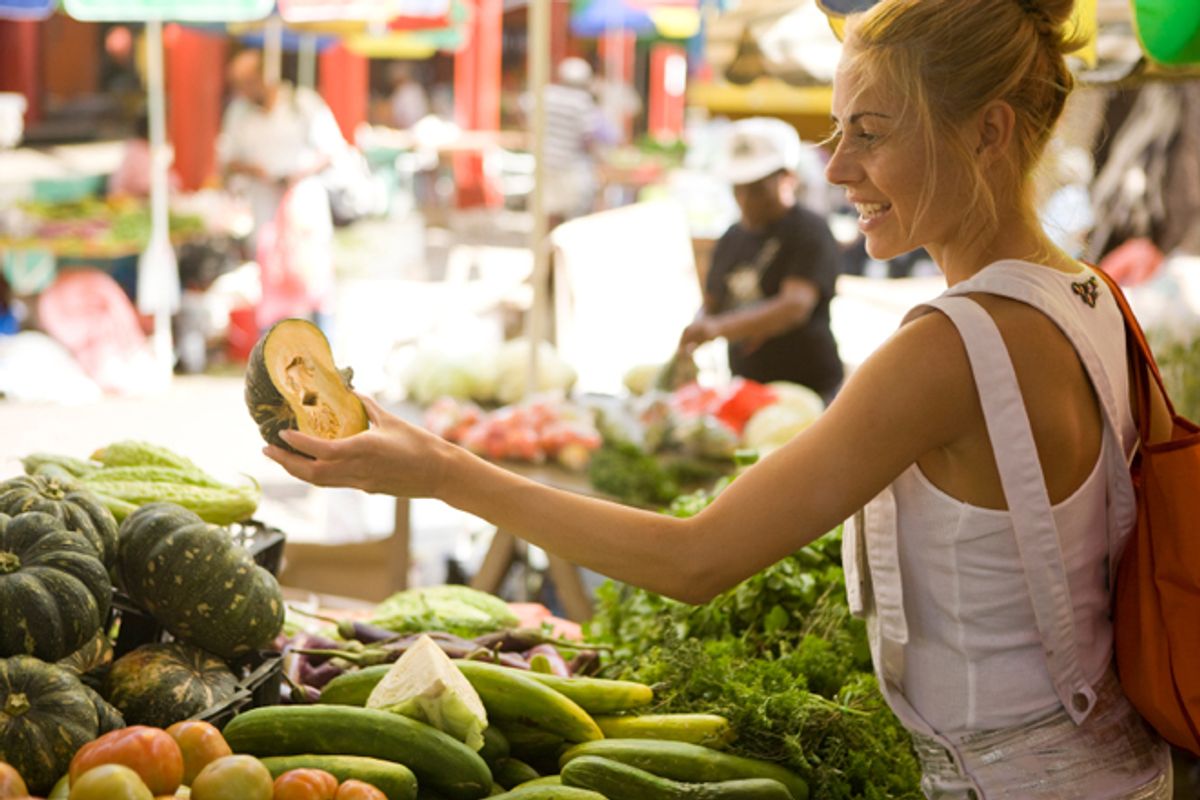 The locavores’ only original addition to the rhetoric of past generations of food and environmental activists is the concept of “food miles” — the distance food items travel from farms to consumers — which they use as a proxy for greenhouse gas emissions. In short, the more distance traveled, the more greenhouse gases emitted and the more overall environmental damage. Despite its popularity, the concept and its underlying rationale have been convincingly debunked in numerous Life Cycle Assessment (LCA) studies, a methodology that examines the environmental impact associated with all the stages of a product’s life cycle, from raw material extraction to disposal of the finished product. Not surprisingly, it turns out that food miles can only be taken at face value in the case of identical items produced simultaneously in the exact same physical conditions but in different locations — in other words, if everything else is equal, which is obviously never the case in the real world.

The fact that retailers are able to sell profitably food items that have traveled long distances clearly indicates that they can be produced more economically elsewhere for reasons that range from better growing conditions to cheaper labor costs. If this were not the case, transportation costs would act as an insurmountable trade barrier. In the most comprehensive literature review to date, in 2007 New Zealand researchers Caroline Saunders and Peter Hayes surveyed 27 studies (17 of which were funded by U.K. sponsors) that all unambiguously demonstrated the relatively insignificant carbon dioxide emission impact of transporting food. For instance, in 2005, researchers associated with the U.K. Department of Environment, Food and Rural Affairs (DEFRA) published a comparison of U.K. and Spanish tomatoes sold in the U.K. that factored in both the production and delivery by land transportation of Spanish tomatoes to British consumers. According to their estimates, U.K. tomato producers emitted 2,394 kilograms of carbon dioxide per ton compared to 630 kilograms per ton for their Spanish competitors. This huge gap could be traced back to differences in the climate between the two locations. Because they live in a much cooler and overcast part of Europe, producers in the United Kingdom had no choice but to use heated greenhouses. Their Spanish competitors, by contrast, are located along the much warmer Mediterranean coast and can obtain much higher yields in non-heated greenhouses, which emitted much less carbon dioxide, thanks to nature providing the heat free of charge.

Tomato production is but one instance of a much larger phenomenon. As American researchers have documented, in their country the “food miles” segment (from producer to retailer) contributes only about 4 percent of total emissions related to what Americans take home in their grocery bags, while 83 percent of households’ carbon dioxide footprint for food consumption can be traced back to the production stages. Again, these credible LCA studies document the common-sensical notion that producing food requires a lot more energy than moving it around. This is especially the case for food that requires significant heating and/or cold protection technologies when the same items can be produced elsewhere in much more favorable climates.

Another general conclusion of the LCA studies is that the distance traveled matters less than the mode of transportation employed, whether boat, railroad car, truck, or individual car. Using 2002 data, the authors of the aforementioned 2005 DEFRA study developed two different types of measurements for food transport. The first was vehicle kilometers — the distance traveled by vehicles carrying food and drink regardless of the amount being transported. The second was ton kilometers — the distance multiplied by load, which gives a better sense of the amount of energy required for each item transported. The researchers observed that 82 percent of the estimated 30 billion food miles associated with U.K.-consumed food are generated within the country, with car transport from shop to home accounting for 48 percent and tractor-trailers (what they call HGVs — heavy goods vehicles) representing 31 percent of food miles. Remarkably, air transport amounted to less than 1 percent of total food miles.

The large share accounted for by cars was the result of individual families making numerous trips to the supermarket. By contrast, delivering these goods to stores using much more efficient means required much less energy per item. In other words, transporting a large volume of broccoli in a refrigerated container that had been moved around on a boat, a railroad car, and a truck to a distribution point required a lot less energy than a few thousand consumers bringing the same volume of broccoli back to their homes.

Significant differences also exist between transportation modes. By far the most efficient is maritime transportation, as modern container ships float on water and are powered by highly efficient diesel engines that can cover huge distances using very little fuel. According to the authors of the DEFRA study, in the U.K. sea transport accounted for 65 percent of food miles — the actual distance traveled by numerous food items that were imported from distant locations — but overall maritime food miles accounted for less than 1 percent of the total vehicle kilometers of the country. So moving New Zealand apples to the U.K. using highly efficient container ships consumed very little energy per apple, when compared to moving the fruit by car and in very small volumes from a supermarket to relatively close residences.

The LCA and other studies have also highlighted additional considerations that, while less crucial to our argument, help put the food miles rhetoric in broader perspective. For one thing, consumers’ transportation choices, such as walking, biking or taking a crowded bus (as opposed to driving) can obviously reduce the total carbon dioxide emissions associated with food purchases. In the worst-case scenario, a U.K. consumer driving six miles to buy Kenyan green beans emits more carbon dioxide per bean than does flying the vegetables from Kenya to the U.K. There are, however, good reasons why most of us use a car to shop. Among other things, when we drive to the store we are able to buy more groceries and thus reduce the number of shopping trips and amount of time devoted to this activity.

Another largely overlooked issue is the amount of food that is wasted. According to some estimates, between 30 to 40 percent of raw food materials and ingredients are lost between the points of production and consumption. In less advanced economies, food losses in the production, harvesting, and on-farm storage stages are primarily attributable to the lack of infrastructure, knowledge, or investment in the means to protect agricultural products from damage and spoilage due to rodents, insects, molds, and other microorganisms. (Postharvest losses as a result of these factors are believed to account for at least 30 percent of the harvested crop in some parts of the world, a dramatic waste of seeds, water, fertilizer, and labor.) By contrast, in industrialized countries, food losses are more significant in retail and food service establishments and in homes.36 For instance, a 2008 British study conducted by the Waste & Resources Action Program analyzed the trash of 2,138 households and estimated that more than 6.7 million tons of food — roughly a third of the food bought by consumers — was thrown out every year. Locavore initiatives such as Community Supported Agriculture result in more waste of fresh produce than is the case when people shop at supermarkets. Another misconception promoted by activists is that the absence (or much smaller volume) of packaging material at farmers’ markets has significant environmental benefits, a notion that conveniently ignores the fact that food packaging has the dual advantage of protecting food from microbes and greatly prolonging shelf life. These advantages, in turn, significantly increase the probability of the food being consumed instead of ending in a landfill or incinerator.

Clearly, if we are serious about decreasing the overall environmental impact of food production, food miles are nothing but a misleading distraction. To quote one of the world’s leading authorities on the analysis of agricultural productions, Dr. Adrian Williams of the National Resources Management Centre at Cranfield University (U.K.), the “concept of food miles is unhelpful and stupid. It doesn’t inform about anything except the distance traveled.” A much more constructive approach to further minimize the environmental impact of agriculture would instead focus on further reducing production and post-harvest losses as well as educating consumers on their food handling behaviors.

From the book: "The Locavore’s Dilemma" by Pierre Desrochers and Hiroko Shimizu. Excerpted by arrangement with PublicAffairs, a member of the Perseus Books Group. Copyright © 2012.

Pierre Desrochers is an associate professor of geography at the University of Toronto who writes frequently on economic development, globalization, energy and transportation issues. He was a research fellow at the Center for the History of Political Economy at Duke University.

Hiroko Shimizu holds a master's of international public policy from Osaka University in Japan. She has been a research fellow at the Institute for Policy Studies at Johns Hopkins University.