Levitt is assumed to be a harmless, quirky pop economist for trivia nerds. Let's take a closer look 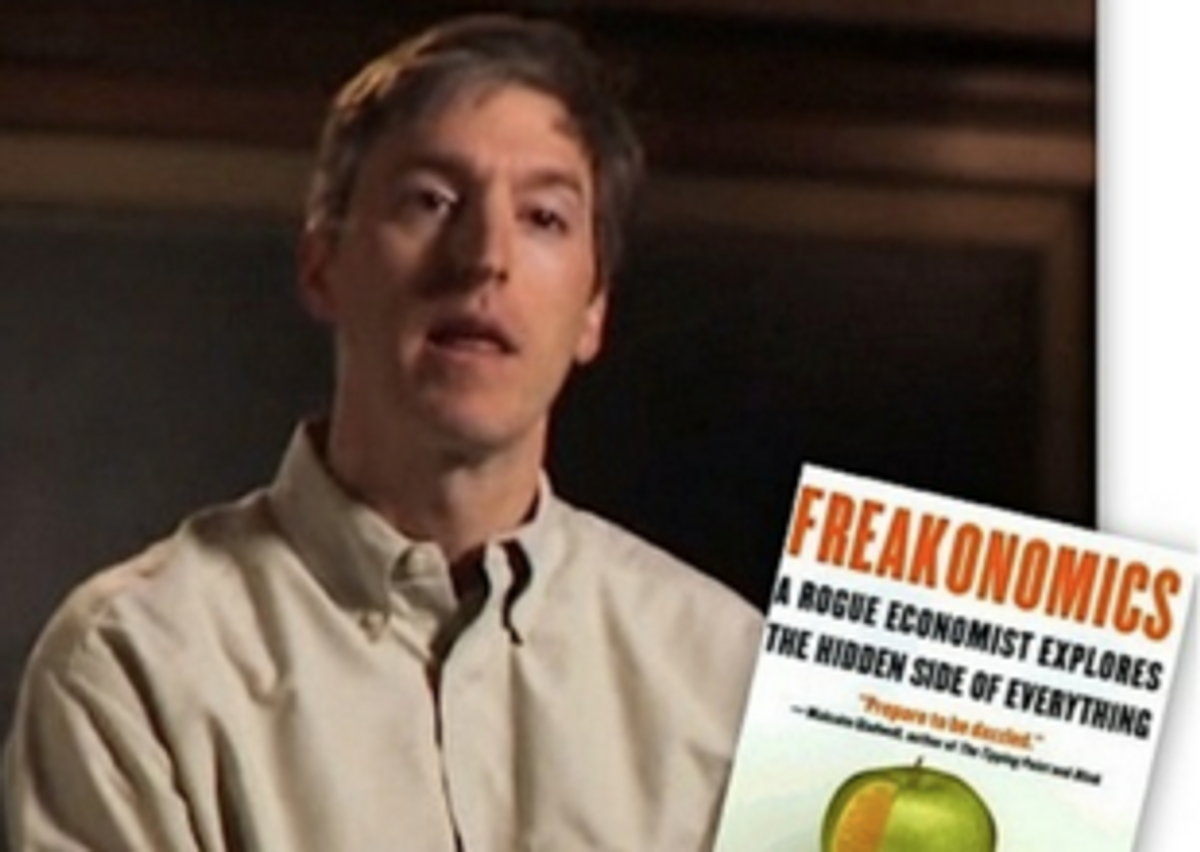 This article originally appeared on the SHAME Project.

In 2006, Time magazine solidified Levitt’s “thought leader” status by naming him one of “100 People Who Shape Our World.”* But despite Levitt’s high profile, very little has been written about his academic and ideological background. Generally Levitt is assumed to be a harmless, quirky pop economist for trivia nerds. But is that really the case?

As Steven Levitt’s S.H.A.M.E. Profile demonstrates, Levitt is a dyed-in-the-wool Chicago School neoliberal who believes in the sanctity of “the market” and a small government whose function is restricted mostly to protecting property rights. He has used “objective” economic research and mainstream credibility as cover, while attacking teachers’ unions, advocating for the privatization of prison labor, spreading crude climate denialism and promoting rank “free market” ideology that sees human labor as a resource to be extracted for maximum profit. Levitt has also developed a nasty habit of misrepresenting the research of other scientists in order to reach predefined ideological conclusions, and has failed to disclose financial conflicts of interest.

But perhaps the most disturbing thing about Levitt is his enduring interest in researching and “proving” the effectiveness of authoritarian and, some would say, borderline eugenicist policies. Aside from doing studies on the positive effects that incarceration has on society (we benefit to the tune of $15,000 per inmate per year if inmates are packed into overcrowded conditions), he published a paper that argued that an increase in abortion rates among black women in the 1970s was the main reason for a drop in crime in the 1990s. The methodology and data of his research were discredited by other economists, but Levitt stuck to his original conclusion linking race and crime: fewer African-American children correlates to less crime. Levitt’s explanation wasn’t just wrong, it was extremely sinister, reinforcing a racist stereotype of the worst kind with a seemingly modern “scientific” explanation. 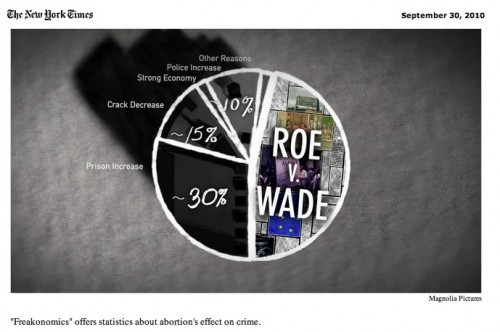 Eugenics theory: alive and well in Freakonomics, the movie.

There’s one aspect of Steven Levitt’s career the profile did not have the space to delve into too deeply: Levitt’s ties to Arne Duncan, President Obama’s Education Secretary and the former head of Chicago’s public schools system.

In Freakonomics, Levitt presents Duncan as a do-gooder and a reformer whose “allegiance was with the children, not with the teachers and their unions.” One thing was true: Duncan did not like unions.

A notorious anti-union activist and crusader for school privatization, Duncan has been credited with doing more than anyone else to help bring the privatized neoliberal nightmare to Chicago’s impoverished and mostly nonwhite public schools. ”Under Duncan, Chicago took the lead in creating public schools run as military academies, vastly expanded draconian student expulsions, instituted sweeping surveillance practices, advocated a growing police presence in the schools, arbitrarily shut down entire schools and fired entire school staffs,” according to a great 2008 TruthOut report.

And Steven Levitt was right there along with Duncan. Working hand in hand with Duncan, Levitt devised a statistical method that allowed Duncan to catch and fire unionized public school teachers who supposedly cheated on standardized tests. Firing and terrorizing public school teachers—this was clearly a point of pride for Levitt. He took personal credit for sacking at least a dozen teachers, gloating in his book Freakonomics that, as a result of his method, “Chicago Public School system began to fire its cheating teachers. The evidence was only strong enough to get rid of a dozen of them, but the many other cheaters had been duly warned.”

You hear that cheatin’ teachers? There’s a new neoliberal sheriff in town and his name is Steven Levitt! 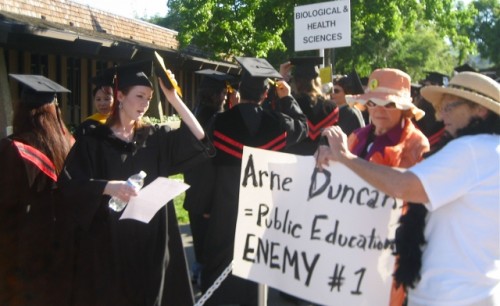 Levitt was extremely impressed with Arne Duncan’s assault on Chicago’s public education—so much so that he published a post on his New York Times Freakonomics blog titled  ”Nobody Better Than Arne Duncan“ when he heard Obama was tapping Duncan for secretary of education in 2008: “I’ve interacted with Arne a few times, and in a variety of settings. I always walk away dazzled. He is smart as hell and his commitment to the kids is remarkable. If you wanted to start from scratch and build a public servant, Arne would be the end product.”