My secret from Dad

For 20 years, I protected him from the teenage trauma that tore apart my world. Now, it's time to come clean 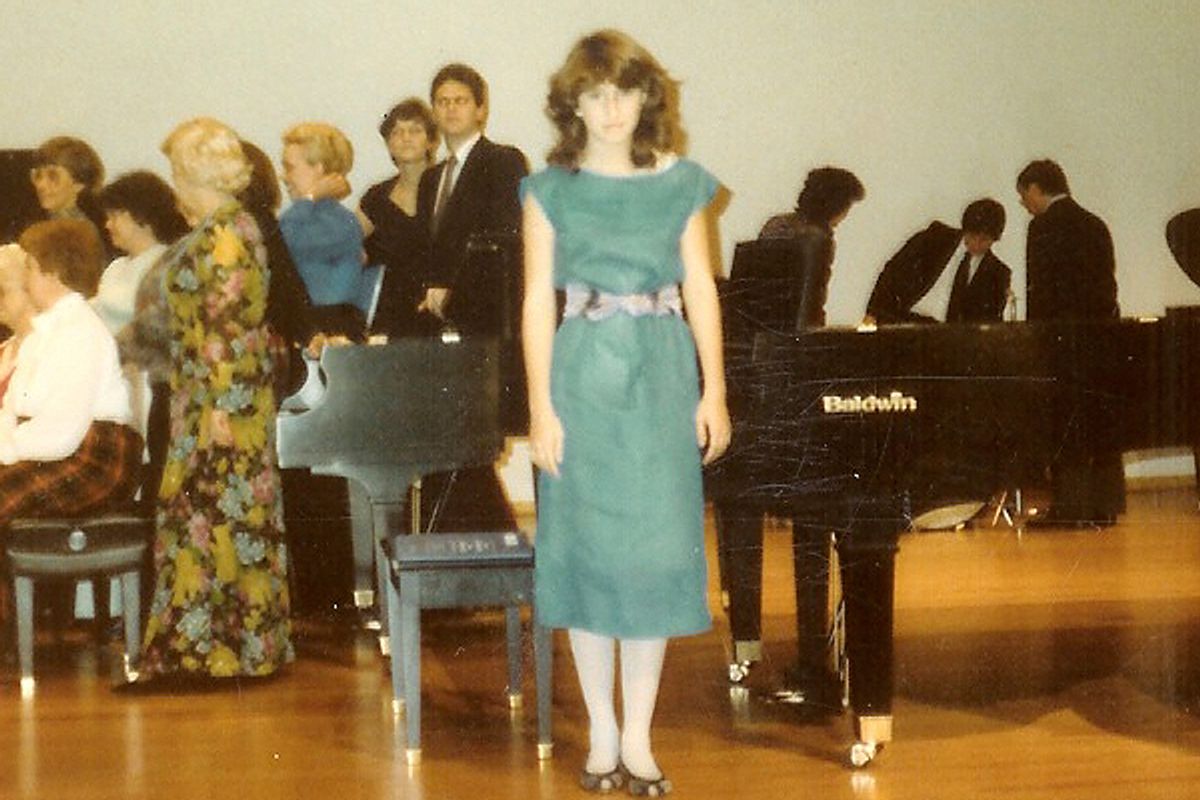 A photo of the author as a teenager.
--

Every Father’s Day, I give my dad a gift. I give him the gift of my silence. I don’t fill in the blanks of what happened to the honor-role girl whose drug-fueled rebellion seemed to come out of nowhere. For the first time in over 20 years, I am wondering if that’s the right choice.

Life and infectious joy pour out of my father. It is because of him that I believed in Santa Claus well into the seventh grade. His mother died of breast cancer in his junior year of college and during his first year of medical school he found himself frantically performing mouth to mouth on his dad while the distant shriek of an ambulance grew closer. By the time they reached the hospital the heart attack had finished its silent assassination, leaving my father to raise his teenage brothers. But he still tells stories of a perfect childhood in an idyllic Southern town. He still sees the world as a place filled with beauty and wonder.

I wonder if he’d still retain his positive outlook if the missing pieces of my story were filled in. What happened shook me, even though I talked to no one. For a while the experience felt uniquely mine, like a white-hot brand had been pressed into my soul. I later realized it’s sadly cliché. Many of us share such interior tattoos.

It started on a cold Tuesday. The bare oak trees outside our fifth-period class window were rippling with heat from the furnace. Classmates’ heads were nodding around me, and I made a joke about it to a wealthy boy recently expelled from Choate and sent to our public school. He thought I was funny and invited me to his 16th birthday party. I was a social misfit. I was desperate to fit in.  As he slid the engraved invitation into my notebook, I shuddered with excitement: This might be my big break. I didn’t eat for two days and bought a floor-length, hot pink dress covered in tiny sparkles. Such an impressive invite called for an equally impressive dress.

And the party was just that. I tried not to trip on my dress as I made my way past the ice swan swimming through a champagne fountain. The boys in sports coats and knit ties eyed me with a mixture of amusement and disdain. The girls in knee-length black cocktail dresses or elegant linen tops with the collars turned up, their hair effortlessly swept to one side, giggled and laughed. I looked for comfort in what would be the first of many drinks. I was not a seasoned drinker. Later, as I was vomiting onto a fur coat belonging to some girl’s mother, I knew I needed to hide. I wedged myself into a tiny closet in the hall and passed out.

The long-haired bouncer, who looked like an extra in a Night Ranger video, found me.  He had made a flirty remark when he checked me off the guest list at the door.  Unsure of whether he was talking to me, I had blushed and hurried inside.  He had definitely been talking to me.

I remember him flipping me over and ripping my pantyhose, then my dress. I remember throwing up again. The rest I worked hard to erase. I woke up in my car around 4 a.m. with vomit-caked hair. I drove back to my house, and tiptoed quietly inside, thankful that my parents did not wake up. I buried my ruined clothes in the bottom of my closet. The next morning, I took a shower so hot I thought my bruised skin might blister. I started the intricate dance of convincing myself it was all part of a drunken dream. I couldn’t face the fact that I had been raped.

On Monday I walked into school feeling detached from the world. As I passed a group of pug-nosed girls, I heard one of them say, loudly enough for me to hear, “Yeah she stayed late to hook up with that bouncer.” Something broke loose deep inside me, like a tightly wrapped box of porcelain dishes dropped from a third floor window onto cement.  If you put your ear to my chest, you could hear the clatter of ceramics splintering into tiny shards. I was so broken I breathed dust.

I changed. The good student who played competitive classical piano and shared my father’s goofy childlike worldview vanished and was replaced by a cynical and walled off girl. I started smoking pot and taking pills. I disappeared from AP classes and showed up later with boys who dangled unfiltered cigarettes out of their car windows and hid red eyes under dark sunglasses.

My parents noticed the shift. But the reason was something they couldn’t untangle. I refused to help them. I built a fortress made of silence and hurt and any drug I could lay my hands on.

As a psychiatrist, my father helped people for a living. I wanted him to see what was wrong without having to talk. I wanted him to look through me like an emotional X-ray and tell me it wasn’t my fault, that everything would be OK. When that didn’t occur, I slashed and burned my way out of my parent’s house. I fled to a ratty apartment filled with punk rock kids who subsisted on white rice and drugs.

Many years later, I found my way back. I began the careful process of mending. I became a serious student again. I presented my parents with scholastic honors and awards as peace offerings. Our relationship healed, but there were times at family gatherings -- wine corks popping while jazz and animated voices filled the room -- when the laughter would give way to a sharp, tense edge.

Loosened by his second glass, my father would pick at the scab of our shared past. It started friendly enough then skidded downhill. Did I remember the shack I lived in by the railroad tracks? No self-respecting dog would have slept there. Did I know what it felt like to look for your child for months not knowing where they were? Pain and anger would flicker across his eyes; his easy smile growing unnaturally hard. I would get defensive or I would apologize. I was sorry he was still angry after all these years. It was a long time ago, I was a different person then. He would wave it away, give me an apology and a bear hug and bluster on to another topic.

More than 20 years passed. My wound faded like old wallpaper layered with colorful paint, photographs, passionate adventure, firmly rooted friendships and moments of complicated beauty infused with spectacular light. If you run your hand over its surface you can feel it all like Braille. I began telling my secret. Friends gave me guidance and support. Still, I never told my father.

Now that I have children of my own, I wonder if keeping silent is really a kindness. Yes, it would be earth-shattering to hear that my child had been hurt, that I had failed to keep them safe. But is it worse to always wonder what went wrong? To see the burnt trail your child has left but have no idea what started the fire?

Over time, my father seemed to blame my selfish behavior on a manic response to drug exploration. And he is right that I was selfish. I am selfish. My experience is mine. Even knowing all the pain I caused myself, and the people I love most in the world, I’m not sure that I would trade it. Without it, I might still be that girl so desperate to please, trying to fit myself into a world where I did not belong.

I might never have hitchhiked across the country and watched a hundred baby owls explode from an ancient barn into a sky flooded with moonlight. I might not have lived for months on a mountainside in West Virginia re-introducing endangered Peregrine Falcons, protecting the tiny downy birds until they could fend for themselves. I might not have been odd enough or wounded enough to meet the artists and friends who inspire and protect me. I might not have dangerously and hungrily wandered the world searching out the person I am today.

Like soldiers who have survived a war together, my parents and I are closer than most. I can talk to my father on a level that shocks my friends. With the arrival of grandchildren we speak on the phone weekly and visit every other month. As far as our continued silence, I don’t know the right answer. So I have decided to put this out in the world like a folded paper ship on a river current, and let nature take its course. If my father finds it, I hope he carefully unfolds the creases and reads what I wrote inside. “Your belief in the beauty of the world saved me. Please don’t change.”

Margaret Mattox is a freelance writer who loves to examine the in-betweens. She is working on her first novel.