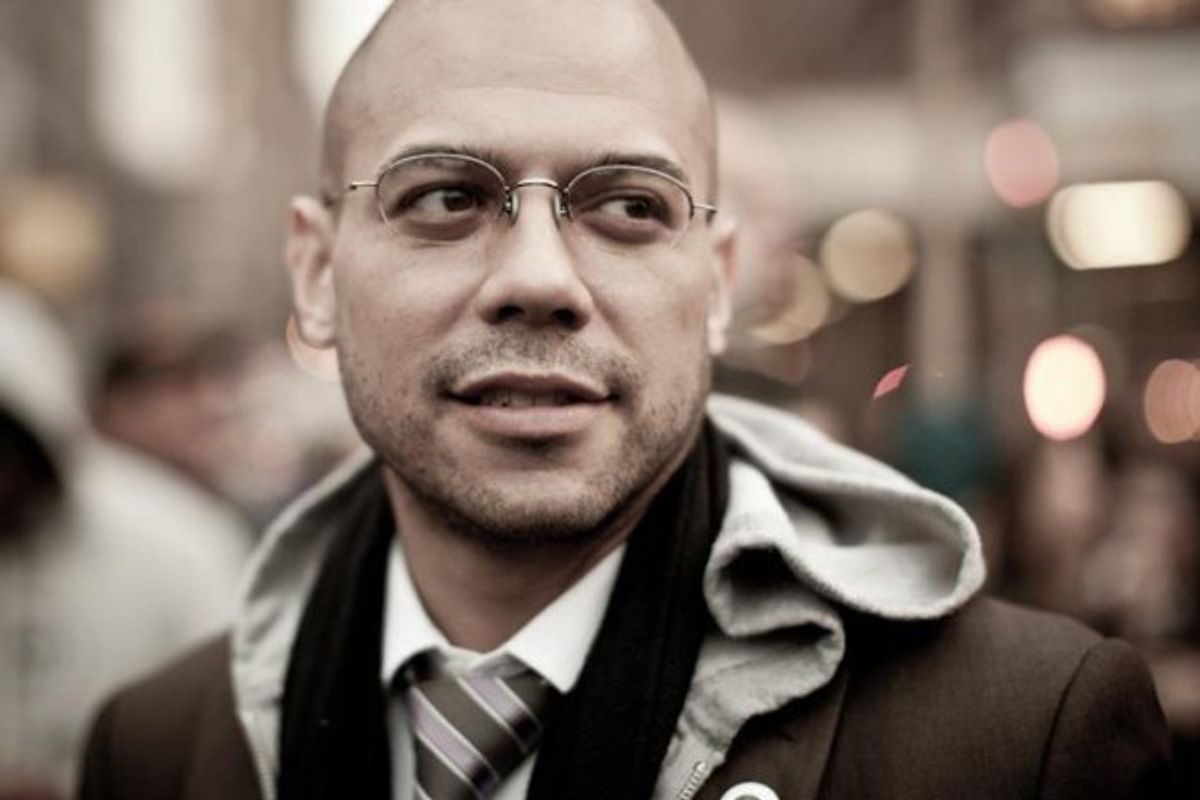 George Martinez is a crier. The self-identifying Occupy activist running for Congress choked up, he recalls, when he first attended a general assembly at Zuccotti Park last fall; he “broke down and cried,” he says, in a hotel room in the Middle East as he watched livestream footage of NYPD officers beating protesters during the encampment eviction last November. He held back tears again just speaking to the Village Voice’s Nick Pinto about “people who are hurting and struggling” and wanting to do something about it.

And earlier this week, when Martinez took to the small stage in New York’s Yippie! Café to address supporters of his campaign for New York’s 7th Congressional District seat, he gave a speech with the relentless cadence of a well-crafted rap – the angry crescendos seemed almost designed to bring him close to tears.

Understandably, a lot of people, like the Voice’s Pinto, are wondering, “Is this guy for real?” It seems a reasonable question to ask about a politician campaigning on platitudes like “people power”; especially a guy like Martinez, the Brooklyn-born-and-raised 38-year-old, emanating charisma in a sharp beige suit with an “Occupy!” pin on his lapel.

“It’s part of a diversity of tactics; this is my direct action,” said Martinez of his congressional campaign, the first run by Occupy participants in New York to get on the ballot. His comments like this, echoing the terms of anarchist organizing that shaped Occupy, would be unintelligible to many establishment politicians. His use of terms like “direct action” and “diversity of tactics” in the context of an electoral campaign also make little sense to many long-term Occupy participants, for whom “direct action” quite literally means that which isn’t mediated by electoral, representative politics.

Martinez maintains that despite a history of engagement in electoral politics, he did not get involved in Occupy Wall Street to boost his political career. “With Occupy at first, I was content that it wasn’t aiming for that,” he told me, dragging on a cigarette outside the Yippie! Café. He explained he saw a need to “open this [electoral] front” to Occupy while traveling in the Middle East, as a part of his work with the United Nations Alliance of Civilizations. (Martinez has long combined community organizing with his work as an unsigned hip-hop artist – aka the Hon. George “Rithm” Martinez – and has been appointed a cultural envoy by the State Department.) During this November trip with the U.N., Martinez was brought to tears watching the live footage of the Zuccotti Park eviction from his hotel room.

“I saw these peacefully protesting young people getting beat down by the police. This is not uncommon to me, growing up in my community in Brooklyn, but it was something about watching these young protesters … I was speaking to my wife on Skype and said, ‘I can do something about this.’”

This “something” manifested as the Bum Rush the Vote initiative, which aims to run candidates for office without corporate financing. “Our goal is to create an open-source, crowd-sourced DIY campaign,” the mission statement notes. The Bum Rush platform reads like a list of proposals laid out by some of Occupy’s more moderate, issue-specific working groups: It includes ending corporate personhood, student loan forgiveness, single-payer healthcare and moratoriums on foreclosure. The idea is essentially to gain support by using free online platforms and building dedicated volunteers who will pound pavements for hours for free. With less than $6,000 in funds and a roving street-based table in place of an office, Martinez’s campaign (the first for Bum Rush the Vote) garnered nearly 3,000 signatures and his place on the ballot. He will take on veteran Rep. Nydia Velazquez, 11-year council member Erik Dilan, and outsider Dan O’Connor in the Democratic primary on June 26.

Velazquez, a 10-term representative with a reported $800,000 in her campaign war chest, was displaced through redistricting this year, but approaches the race for the new 7th District (which stretches from Brooklyn into Lower Manhattan and Queens) with the strength of a popular incumbent. Martinez’s stint in 2002 as leader of Brooklyn’s 51stAssembly District, his time as assistant director at the Attorney General’s Office and his recognition as a community organizer are considerable credentials, but Velazquez has been a House representative since 1993. Even with help on the street and YouTube from that dweeby guy from "Gossip Girl," Martinez will struggle to unseat the House veteran.

“We at least need to establish what an Occupy campaign can look like,” Martinez tells me, explaining that the idea is to find other Bum Rush candidates to run similar low-budget campaigns in city council, mayoral and other congressional races in the coming years. “I’d like to see a sweep in the House in two years,” he said.

There’s a niggling inconsistency in Martinez’s plan, however, that points to a more problematic contradiction inherent in the idea of an Occupy candidate. His volunteer campaign team members -- all Occupy participants -- speak the amorphous but recognizable language of Occupy. “We want to be the reality of what it means when we say, 'We are the 99 percent,’” said deputy campaign manager Cecily McMillan, a long-term Occupy Wall Street participant who caught media attention when she was struck by police and went into a seizure during the OWS six-month anniversary demonstrations. But more than any buzzwords like “grass roots,” “community” or “Occupy,” Martinez’s supporters talk about “George” and how, somehow, he’s different.

“A lot of the young people who got involved in Occupy went out hard for Obama in 2008. We got our hearts broken. But George is the light, he’s the fire, he’s the ‘this little light of mine,’” said McMillan, who, unlike many peers in Occupy, did not agree with eschewing a demand structure, and found her desired plan and program in Bum Rush the Vote.

“I’m no Democrat; Barack can go flop his ears. But I will work for this man,” said another Martinez supporter and long-term OWS participant, John Murdoch. More surprising still, a self-proclaimed anarchist, Brenton Lengel, told me, “It’s hard to find someone more disillusioned in electoral politics. But I’ve never been excited by a politician like George.”

Martinez is in the business of being all things to all people -- musician, professor, diplomat, Puerto Rican son of a single working mother, anti-corporate activist, a worldly Brooklynite who knows your troubles a hundred times over. In a sense, he truly is an Occupy candidate, as it’s clear that “Occupy” came to mean many things to many people too. For a lot of people, myself included, if “Occupy” referred to anything, it was an insistence on creating spaces for political engagement that did not rely on representation. But for the long-term Occupy participants rallying behind Martinez, the game is now to get into the House of Representatives.

And although Martinez insists to his supporters, “I don’t have the answers – we do,” and I think he believes it, it’s hard to make sense of bringing a challenge to hierarchy into electoral politics through a campaign based largely on belief and hope in a particularly charismatic, adept, albeit passionate politician and performer. We’ve heard that one about “Hope” before, I thought.