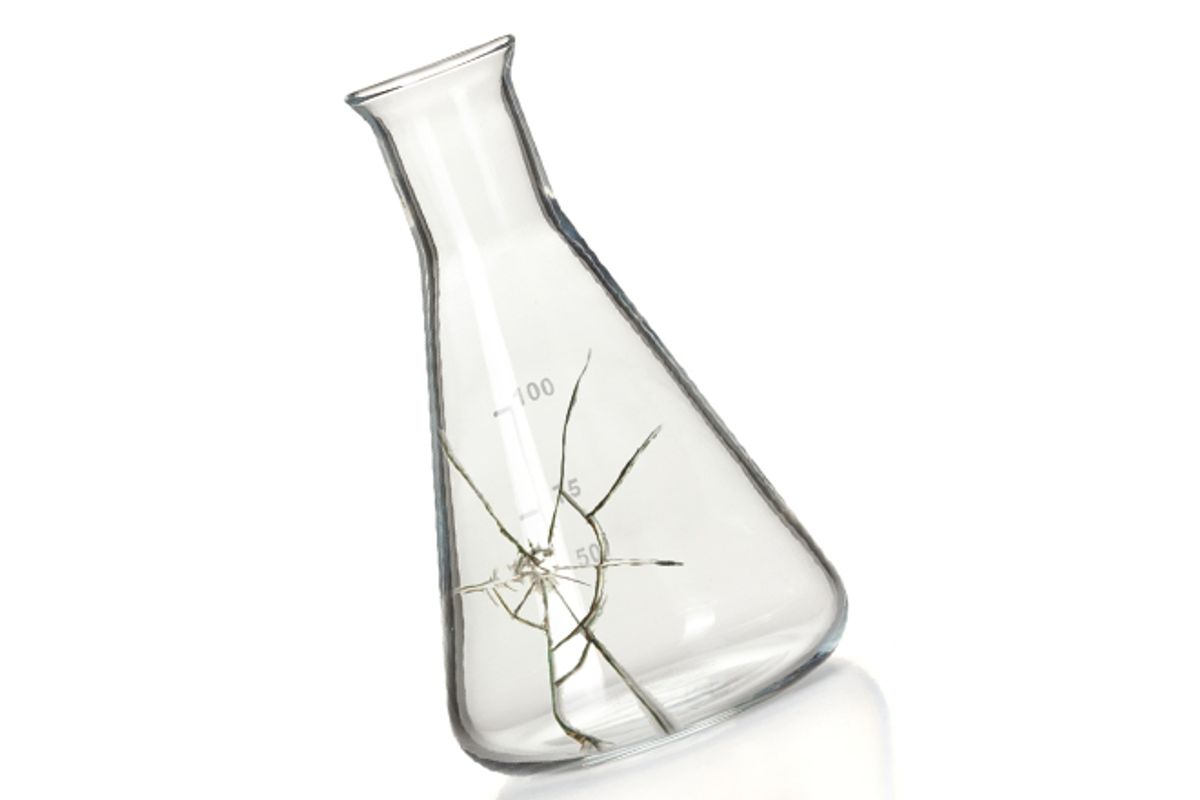 Public education and even modern science are relatively new developments in human history. So it makes sense that it would have taken the populace a while to catch up to understanding that evolution did happen, and that angels probably aren’t real.

But recent polling data suggests that gradual acceptance of the facts may not be the trend when it comes to the theory of evolution. In the 30 years since Gallup started asking people whether they believe humans evolved, evolved under the guidance of God, or were created fully formed by God, the percentage of people adhering to the creationist view has actually gone up slightly over time, and now stands at 46 percent of the population. This is just the tip of the iceberg of a growing problem of public rejection of science.

At the same time, there’s been a steady rise in people who believe that humanity evolved without any supernatural guidance, and now stands at 15 percent. What this seeming conflict suggests is that the issue is getting more polarized, as people feel they either have to pick Team Evolution or Team Creationism.

It turns out that education isn’t enough to fight ignorance, not when it comes to heavily politicized issues like evolutionary theory. As Chris Mooney argues in his book The Republican Brain, political identity generally trumps sober-minded assessment of the facts when it comes to convincing people of an argument or idea. The theory of evolution isn’t being rejected on its merits by the people who don't buy it. It really can’t be by someone who is honestly assessing the evidence.

The Tea Party has only intensified social pressure on conservative-leaning Americans to shun anything perceived as irreligious or academic. Science has always had a political edge to it, but the culture wars ramped up by the Tea Party have taken the problem to a whole new level.

The past decade-plus have turned science from a mostly politically neutral issue into a heavily partisan one, with Republicans becoming the party of anti-science while Democrats increasingly tout their dedication to research and evidence-based policy. According to a study published in American Sociological Review, since 1974, conservative trust in science has been in a free-fall, declining 25 percent. In 1974, conservatives were the most pro-science group, higher than liberals and moderates. Now they’re the least pro-science group of all, with liberals showing the most trust in science.

People who frequently attend church were the most likely to lose their trust in science, reinforcing the cultural sense that faith precludes acceptance of religious facts.

Evolution is hardly the only scientific reality to suffer from conservatives' growing sense that their ideology is not compatible with science. In the short period between 2010 and 2012, the percentage of conservatives who accept global warming declined from half of conservatives to only 30 percent of them. That doesn’t reflect any kind of major shift in the evidence or the arguments around global warming--the scientific consensus that warming is happening and human-made has only solidified in the past couple of decades--so much as the strengthened perception that conservatism and believing in global warming are mutually exclusive. As the political media pays more attention to conservative distrust of science and liberal embrace of it, the image of who believes what will only intensify.

Climate change is strongly associated in the public mind, rightly or wrongly, with anti-capitalism. The theory of evolution faces a similar problem, especially as it’s routinely linked by religious and other thought leaders with a kind of subversive atheism. These kind of identity politics that create doubt about science have immediate negative impacts for all of us, especially with regards to global warming, but as with many things pushed by conservatives, working class and poor people are likely to pay the greatest price. Any liberal who focuses on economic issues should pay close attention, because in many ways, the war on science is a war on the most vulnerable among us.

The public’s resistance to evolution might not seem like a big deal at first, since the main result of conservative activism is that high school biology programs give up teaching evolution, while universities retain their evidence-based curriculum. In fact, Kevin Drum argued in Mother Jones that creationism in schools didn’t really matter because, “knowledge of evolution adds only slightly to a 10th-grade understanding of biology.”

The problem with that is that someone who doesn’t get proper education early tends to lag behind for the rest of their educational career, and the 10th-grader who doesn’t get real biology courses will often be too far behind her better-educated peers in college to even consider a career in science. How many potential doctors and scientists are being lost because they didn’t have the economic advantage of going to a private school that did provide a proper education, but instead went to a public school that dished out creationist propaganda?

As PZ Myers argued, the poor public education in science means that a shrinking portion of the American public is going into careers in science. Americans from working class backgrounds who go into these careers are far more likely to use their education and career contacts to return to their communities and improve the economic and health conditions back home. But with these declining numbers of American scientists, that possibility is being shut down.

The public’s rejection of global warming is even more dangerous for working class and poor people. It’s well-understood that poorer people bear the brunt of environmental destruction, since they can’t afford to move out of polluted areas that are linked to health issues like asthma and cancer. There’s no reason to think that global warming won’t create similar problems, with wealthier people abandoning areas that are now flood plains. As summers get hotter, air conditioning is going to become all the more necessary, but soaring fuel prices will start putting it out of reach for ordinary people, even as the annual death toll from heat stroke continues to climb.

But because the media portrays climate change as “controversial”--strictly because of conservative distrust of science--most Americans are oblivious to the severity of the problem. Campaigns barely touch it, and lower-income people have even more obstacles when it comes to demanding action on this issue, because they’re usually too busy worrying about immediate economic concerns. Better science education and more trust in science could help the raise the issue higher on the priority list for all voters, but especially those who will be most affected. As it is now, it’s nearly impossible to get the conversation started.

Science and science education feel like they’re academic issues that, while interesting and important, aren’t top-tier progressive issues like economic justice or healthcare access. But without strong social support for science, these goals will be much harder to reach, and in some cases, impossible. The high levels of scientific illiteracy in the U.S. should be as upsetting to liberals as high levels of reading illiteracy would be, and should be addressed just as seriously.