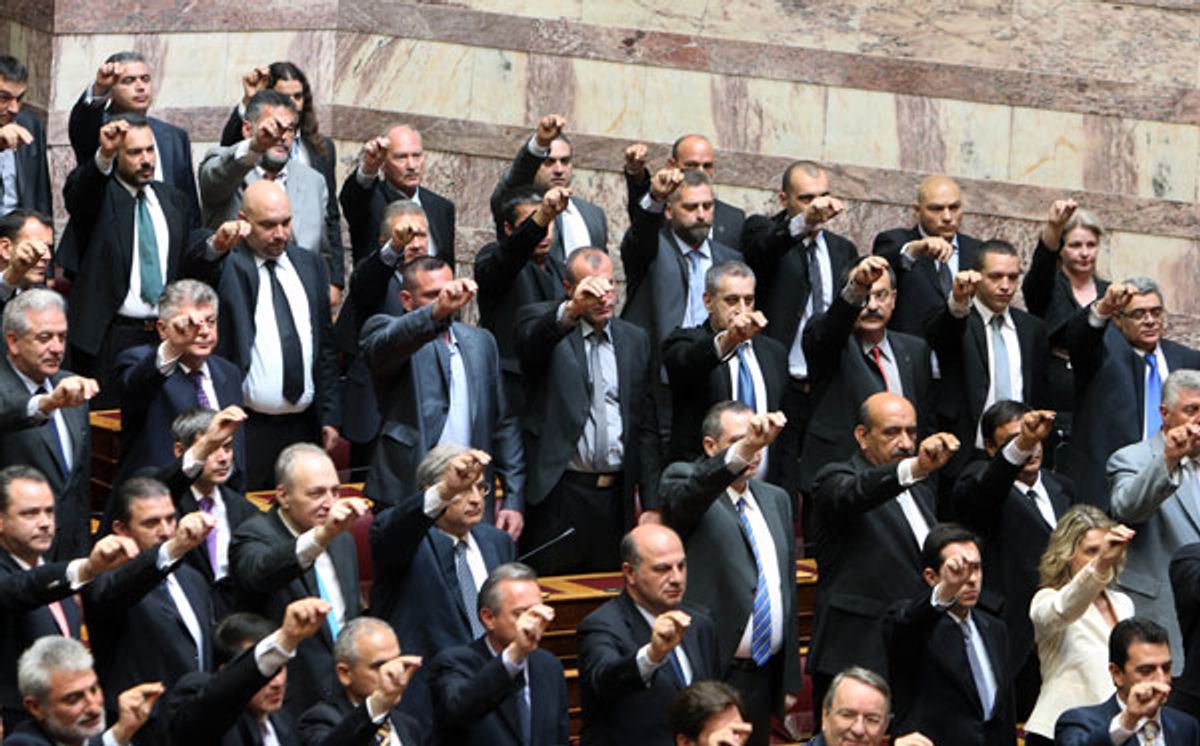 First, Greece. The “pro-bailout” New Democracy party won a plurality of the vote in the Greek election and will now try to form a governing coalition that will try to keep the troubled nation in the Eurozone. But I suspect most folks paying attention to this are wondering two things: 1) what really changes? And 2) what does this mean for the U.S.?

Re 1, probably not much but that’s to be seen. They’ll be a short relief rally in markets by those worried that a leftist victory would have heightened the prospect of a disorderly Greek exit from the zone (a friend and I wondered if the rally would last a whole session or half a session). But the thing to watch here is less the Greeks and more the European economic authorities, including the ECB, IMF and the German government.

Before the vote, they all tried to assuage investors, saying in essence that they had big guns ready to deal with the uncertainty of a victory by the anti-bailout Syriza party. The important thing to watch is whether such guns — loans not just to banks but to sovereigns themselves, a lower borrowing rate from the ECB, less punishing austerity requirements, larger backstop funds — go back in holsters. If they do — if Europe’s policymakers go back to the same muddling strategies that have prevailed thus far — then the answer to what’s changed is: nothing.

Re 2, if nothing’s changed then Europe continues to be a threat to our already wobbly recovery. My guesstimate is that the e-zone recession is currently sucking 25-50 basis points off of U.S. GDP growth on an annual basis. So if GDP ends up growing around 2 percent this year, absent the e-zone recession, it might have grown as much as 2.5 percent. A Greek exit would have probably made that impact worse sooner, so I don’t think the election outcome hurts us more than we’re already hurting.

Next, a thoughtful treatise on the fiscal cliff from the NYT editorial page. I think the process they lay out is the right one. Don’t panic, but start planning now for a quick trip down the fiscal slope that is reversed with a compromise involving the partial can-kick I describe here.

We should all be aware, however, that this sensible plan assumes that the politics of January 2013 are considerably better — where “better” means more open to compromise — than the politics of today.

Next, a nutty attack on the Affordable Care Act by Robert Samuelson at the Washington Post. None of it makes sense — reverse the polarity of almost every bullet point in there and you’ll have it right. But for now, let me just hit on the claim that healthcare reform is a jobs killer.

The ACA /jobs question has far more moving parts than Samuelson’s lazy “If you increase the price of labor, companies will buy less of it. Requiring employers to buy health insurance for some workers makes them more expensive, at least in the short run.” There are parts of the bill that raise costs, parts that lower them (subsidies for low-income families and small employers), parts that have no impact (firms with fewer than 50 workers are exempt from the coverage mandate), and important from a labor demand perspective, parts that significantly raise health coverage.

This very non-lazy analysis by Holahan and Garrett suggests these are all likely to offset each other re jobs impact, but we won’t know until we see how things pan out. Which leads me to this particularly germane analysis of which Samuelson is apparently unaware (though HuffPo has it). It’s a case study of a natural experiment of sorts: since Massachusetts has implemented a version of healthcare reform quite similar to the ACA, the study asks how has job growth fared in Massachusetts relative to neighboring states that presumably faced similar economic conditions. And the answer is: no differently at all.

Massachusetts has achieved its goal of near-universal health insurance coverage under its 2006 health reform initiative, with no indication of negative job consequences relative to other states as a result of health reform.

I’ve often disagreed with Bob Samuelson but I’ve also often found his arguments to be well-researched. The fact that he either didn’t bother to do the requisite research on this question or is ignoring the best work to date on the topic suggests ideology over empirical evidence. And that’s exactly what we don’t need right now.