What Obama did to Romney 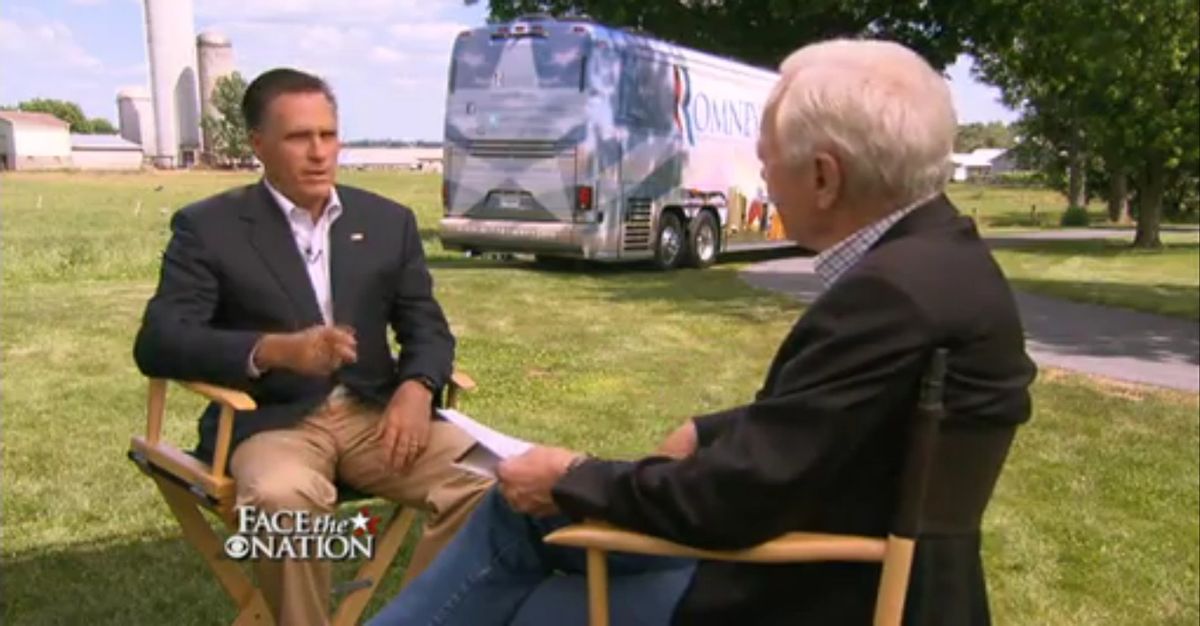 The political effect of Barack Obama’s decision to make up to 800,000 children of illegal immigrants eligible for work permits was on display yesterday, when his opponent sat for his first non-Fox Sunday show interview.

The first question Mitt Romney got from “Face the Nation’s” Bob Schieffer was about whether he’d repeal Obama’s order if he becomes president.

“Well, let’s step back and look at the issue,” Romney responded. He then expressed his support for an employment verification system and a “long-term solution” to address the status of children who were brought to America at a young age by their parents, deriding Obama for taking what the president himself called a stopgap measure.

OK, Schieffer said, but Obama just implemented this new policy – what would you do about it?

“What I would do is I'd make sure that by coming into office I would work with Congress to put in place a long-term solution for the -- for the children of those that have come here illegally. And I've said, for instance, that those who served in the military, I would give permanent residence, too.”

The host tried again: “Sure, but would you repeal this?”

“Well, it would be overtaken by events, if you will, by virtue of my putting in place a long-term solution with -- with legislation which creates law that relates to these individuals, such that they know what their setting is going to be, but would not just – not just for the term of the president, but on a permanent basis.”

One more try from Schieffer: “I won't keep on about this, but just to make sure I understand, would you leave this in place while you worked out a long-term solution or would you just repeal it?”

This really is the definition of talking without saying anything. And in a way, it’s totally consistent with Romney’s general election strategy, which relies on speaking in broad, platitudinous terms and avoiding policy specifics and culture war traps as much as possible. He wants to be the generic vehicle for swing voters who are motivated by their economic anxiety to seek an alternative to President Obama – nothing more, nothing less.

But immigration looked like it was going to be the exception to this strategic principle, an opportunity for Romney to make a bold-seeming stand that would repair some of the primary season damage he incurred and create the impression of strong and effective leadership.

The idea, which Romney teased during a private meeting with donors a few months ago, was for Sen. Marco Rubio to trot out a watered-down version of the Dream Act sometime this summer and for Romney to endorse it. This would represent a break from the hard-line posture Romney struck when he was battling Rick Perry, Newt Gingrich and Rick Santorum, and would serve as a potentially reassuring gesture to swing voters who are uncomfortable with the nativism that has taken hold on the right. Rubio’s framework had the added bonus of being a possibly acceptable compromise for immigration advocates; real momentum might have built for it, burnishing Romney’s leadership credentials.

But what Obama did Friday eliminated Romney’s opening, since he essentially implemented what Rubio was going to propose. This put Romney in an awful position. His campaign is committed to never, ever giving Obama credit for anything, but the steps Obama took are also quite popular and (relatively speaking) modest in scale; to oppose them might worsen (!) Romney's problems with Hispanic voters and smack of nativist pandering.

So he was left to spend the first few minutes of a network television interview trying to avoid agreeing with Obama without actually disagreeing with him. It was an awkward and transparent attempt to run out the clock, reminiscent of “Saturday Night Live’s” 1988 take on George H.W. Bush’s debate strategy.  The effect was to reinforce the image of Romney as slippery, calculating and scared of giving a straight answer – the very perception that, until Friday, he seemed poised to use the immigration issue to combat.