I wanted to be supportive, but I worried that his return to the nest marked a failure for him -- and for us 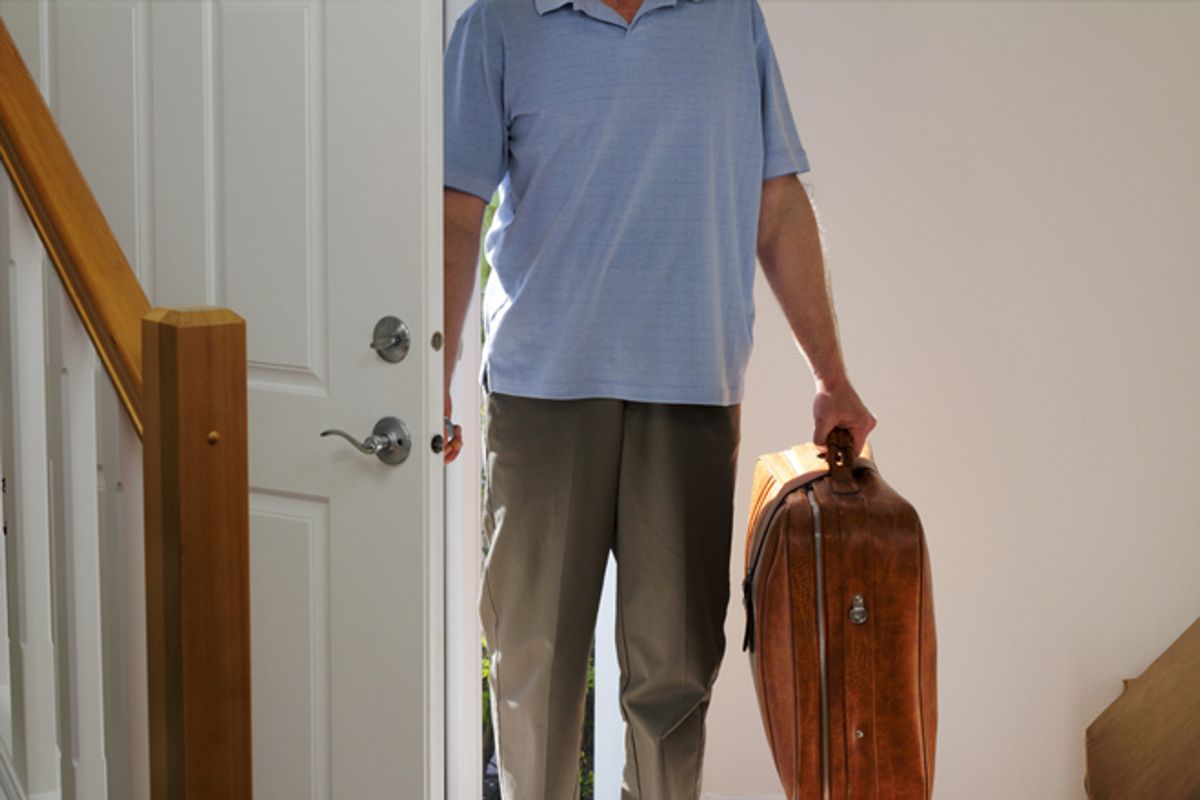 I’m not sure how my son will feel when he finds out I’ve written a story about his return home after graduating from college. On the one hand, I’ve become much closer to my son in the 10 months since he’s been living at home, so I should be better able to intuit how he’d feel. On the other hand, I’ve learned not to ask too many questions.

Those 50 words pretty much capture what it’s like to have an adult child living at home again.

Yet there is, within these few words, an alternate universe. Or maybe another dimension, as Rod Serling would say before introducing the next episode of “The Twilight Zone,” into which we stepped that day in August 2011 when my son unloaded his car and moved his belongings into the attic and spare bedroom. I say “we” because it is us -- my husband and son and I -- that inhabit this dimension together, along with the two elderly dogs and other assorted animals of our children’s past.

From the beginning, my husband was much more at ease with the repopulated nest than I. He’s a laissez-faire kind of guy. I’m the worrier. My concern, if that’s what you call it, was that my son’s move home marked a failure for him. A failure for us.

This isn’t what I wanted for my son. I wanted him to find a job, to embark on his life’s journey. I wanted to twitch my nose like Samantha on “Bewitched” and erase the collapsed economy from history. I wanted a return to the old days when a liberal arts degree and not much experience could still get you a job, maybe even a future.

Before his return I peppered my son with questions whenever we spoke. I wanted to know his plans, what he had done to find a job, why he couldn’t find something – anything – to support himself.  I knew I was being a pest, but I told myself I needed time to absorb the answer that I knew was coming. It was the familiar game many worriers engage in, that if you brace for the worst-case scenario, the shock won’t be so severe when it comes.

That’s usually not the way these things play out, however. My husband tells a story about the time in high school his mother caught him eating cold spaghetti while standing at the open refrigerator. She insisted he was high on marijuana. When my husband finally surrendered to her badgering and admitted he was high, his mother collapsed to the floor sobbing. “Don’t tell me, don’t tell me.”

When the inevitable news came from my son I felt like I had been stabbed in the heart, but I didn’t fall to the floor. I didn’t cry. I was optimistic. This situation was only temporary. I felt sure that within a few months of living at home my son would take any job, anywhere in the world, to be away from us.

Life wasn’t bad, however. We ate most meals together and watched movies after dinner. He was helpful around the house and in the yard. We fixed the washing machine together, something my husband and I wouldn’t have attempted, alone or together. Landscaping got done, a tree was felled. We all hung out.

When we passed in the hall and exchanged pleasantries I’d ask about jobs or have a bit a motherly wisdom to share. After a while he’d roll his eyes and silently retreat to his room. I worried over his eating habits, haircuts and interview clothes. I thought I was being understanding and concerned. I thought I was being helpful.

But I wasn’t. I was annoying, meddling.

He did get a job, and I was proud of him. But because it wasn’t on a career path I thought suited him or his education, I had a few suggestions on ways to turn it into a better career. When I shared these with him he’d walk away without responding. That’s when I started sending him emails with links.

We had always been a close family, having long conversations around the kitchen table, but as I steered these conversations to my inevitable topic on the future, jobs and careers I noticed my son wasn’t interested in talking to me at all. Tensions rose. There were harsh words between us.

That’s when I cried.

It’s an unfortunate fact that life’s lessons often come after painful experience. This was mine – and I believe his. Having an adult child live at home made me realize I needed to back off and let my son be an individual, independent of his relationship to me. We needed another familial category in which to live, one not quite embracing the dynamic of parent/child yet closer than roommates. We like each but we have come to respect a healthy distance in our everyday lives.

I wasn’t really surprised to find out the New York Times was on to this trend. In an Op-Ed piece recently, “You Can Go Home Again,” two researchers said that for my generation of parents and our children, blood and money aren’t the only things that bind. We actually like each other, the researchers said, but both parent and child view this engagement as damaging over-involvement.

In other words, we like being close, but we worry about it. Sounds familiar.

So what’s it like in the repopulated nest, in this new dimension we’ve entered? You can probably figure it out. It’s good, bad and everything in between. It’s life. And you know what? I’m not worrying about it.  So when people ask what my son is doing I tell them happily that he’s living at home like it’s the most normal thing in the world.

And now, I have to figure out how to tell him about this story. I think an email with a link would be best.