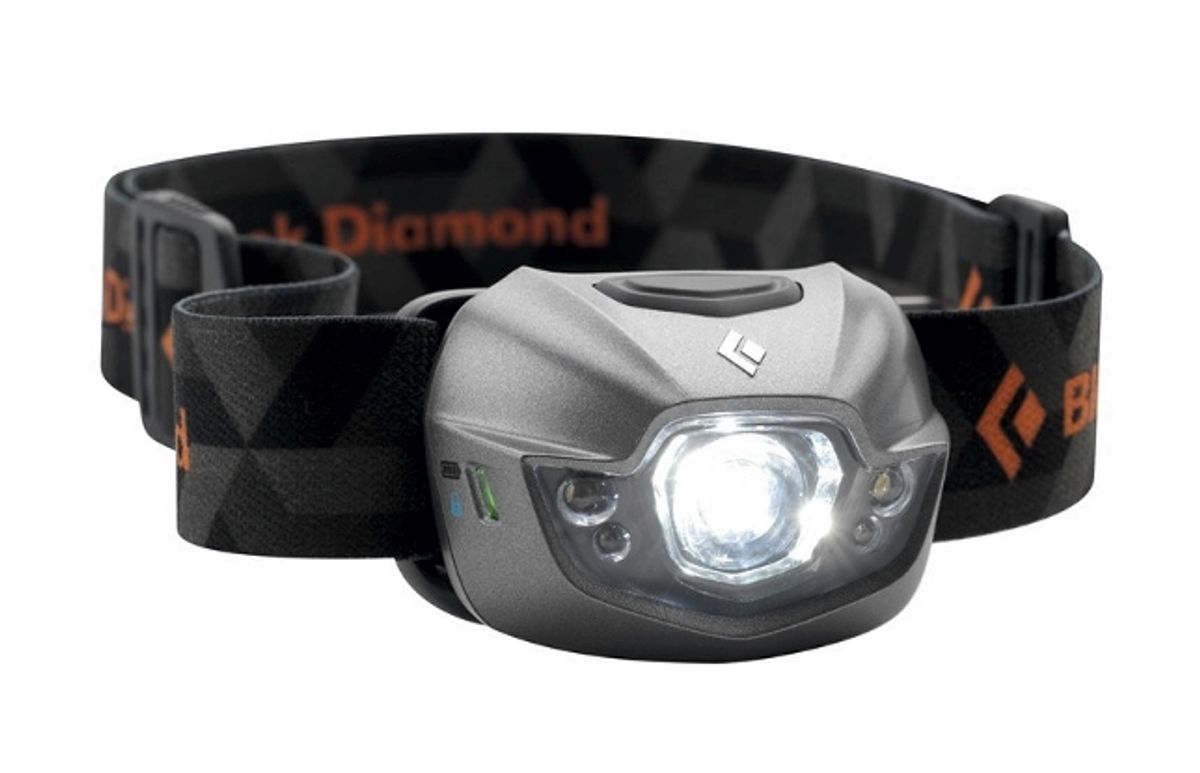 I'd get the Black Diamond Spot headlamp. For as little at $33, it’s a lamp that’ll provide all the illumination most people will ever need out in the field, or for emergencies and chores around the house.

(Note: If you need a hardcore expedition headlamp, I'd recommend you check out Gearjunkie.com)

There are few portable lighting sources more practical than a headlamp. Turn your head and the light turns with you, illuminating whatever you look at. That you wear it on your head also means your hands are kept free for more important things like setting up a tent in the dark, grilling a late night snack in your backyard without waking up your neighbours or changing a tire at the side of a poorly lit road. Off your head, you can hold and use it like you would a regular flashlight or use the headband to lash it to something and hold it in place. The headlamp is the modern flashlight.

As cool as they are, I've never owned a headlamp. My former career required that I often keep a low profile when working in the dark. On rare occasions when I needed a light source, I turned to a Blue Star Tactical Professional Flashlight. The rest of the time, I relied on night vision optics to keep from stumbling around after sunset. Given my background and the kind of hardware laying around my house, I felt that to best serve you I’d best swallow my pride and ask someone about headlamps that knows a hell of a lot more about enjoying the wilderness than I ever will. To that end, I asked Stephen Regenold from GearJunkie.com what he thought I should look for while researching what headlamp would suit the needs of most users.

“The average camper probably needs between 50 and 100 lumens of brightness and is comfortable to wear,” explains Regenold.  You don’t want it to  weight a lot. It should use LED technology, which I think every single headlamp does now. Another thing I think is important is battery type. I rely on AA or AAA batteries 100% of the time. It’s a lot more convenient than other kinds of batteries.” I pointed out that you can get lithium batteries in AA and AAA sizes, and asked him whether he thought the weight difference and additional runtime they provided were worth the extra coin you have to fork over to buy them. Regenold’s opinion: Nah.

“For the average person, I don’t think lithium is really necessary”, says Regenold. “I think the weight thing is silly. The weight difference is so negligible. They do certainly last a lot longer, but for most people, I don’t know if it’s worth the money. It’s worth the money for me if I’m climbing a mountain and I don’t want to bring three sets of batteries. Instead, I just bring one set of extra batteries if they’re lithium. Maybe the weight can add up if you’re doing a long trip and you’re bringing a lot of batteries”. Regenold also suggested a few different brands that I might want to pay attention to: Princeton Tec, Black Diamond and Petzl.

All three have a reputation for quality, and they’re all easy to find online and in stores. If you live in the United States, REI stocks them. (Since I live in Canada, I found them at Mountain Equipment Co-Op.) After talking to a number of people from both chains, I found that there wasn’t a clear brand preference, at least not from the point of view from the stores’ sales staff. With this being the case, I took the advice Regenold provided to and spent a number of hours browsing hardware, with a mind to specs, cost and user and editorial reviews. After building a list of what looked good, I headed to a number of shops in town to go hands on.

The Black Diamond Spot covers all the bases that Regenold mentioned and of all of the lights I researched, it provided the best blend of cost, features and favorable reviews.

Weighing in at 90 grams fully loaded with batteries, it’s light enough that you won’t find it a pain to wear or cart around in your pack while it’s not in use. The Spot’s TriplePower LED can crank out 90 lumens of luminosity, which translates into a light bright enough to illuminate objects up to 70 meters away.  That's a lot better than most lamps that are $33, even from lesser companies.

If you’re using the Spot to read or set up your camp in the dark, it also has a lower setting that’s perfect for working with objects up to a maximum of 15m away. There's also a strobe setting and a low battery indicator light. Despite the impressive amount of light the Spot can crank out, a single set of three AAA batteries, depending on what setting you use, will last you 50 or 200 hours respectively. It also has a pair of red LED lights that you can use to provide a little illumination without doing too much damage to your night vision. Thanks to it’s wide, adjustable headband, the Spot’s comfortable to wear. Once you have it on your head, it’s easy to use too: all of the headlamp's functions are controlled by a single rubberized button that’s large enough to find and push with your bear hands or while wearing a pair of winter gloves. It’s got a IPX water resistance rating of  4—high enough that you won’t have to worry about getting caught a downpour with it. Best of all, it’s cheap: you can find the Spot for as little as $33 on Amazon.

Outdoor Gear Lab loved the Black Diamond Spot, saying “ It has the brightest spotlight mode of the 3 AAA battery headlamps we tested. It stood out for how consistently it scored above average in all our tests. Most other headlamps had a category they scored below average on but not the Spot. It was one of the easiest headlamps to turn on and off and was the best small headlamp to use with gloved hands”.

The health-minded folks at Wilderness Running were familiar with the older version of the Spot as well as the 2011 iteration. Their review of it stated that the Black Diamond Spot “…used to represent an affordable, get-you-by headlamp. Now it’s a no-compromises compact powerhouse and probably the best value, dollar-for-dollar of any running headlamp with which I’m familiar”.

Backpacker Magazine had their world rocked by the Spot’s running time. They found that it ”…shone for two days in spot mode on alkaline batteries, 15 hours longer than the next closest competitor on a similar setting.”

Even hardcore naturalists love this thing. Take Russell Hunter: he’s a full-time guide with the Colorado Mountain School. On the school’s blog, Hunter explains, “When guiding in the mountains, an alpine start is often required to maximize the potential for good weather.  Getting up and off a route before afternoon storms roll in is essential to climbing in the mountains. The Spot is the perfect headlamp for these early morning starts: it is small, light, and incredibly bright!”

As great as the Spot is, no piece of hardware is perfect. Some reviews at Amazon and in forums like the Trailspace Outdoor Gear Community complained that Black Diamond gear on the whole isn’t as sturdy or reliable as it used to be. As I haven’t owned or tinkered with the company’s older hardware, I can’t objectively brush statements like this off. However,  in the course of researching this recommendation for you, I spent just shy of four hours handling 25 different headlamps from multiple brands at different price points. Petzl, Surefire, Princeton Tec, Light & Motion and Mammut all spent some quality time on my forehead. Compared against these, Black Diamond’s hardware, to me, felt just as robust if not more so than the similarly priced equipment being offered by the company’s competition. What’s more, the sales staff I spoke to at outdoor specialty stores like REI and Mountain Equipment Co-Op and Robinson's Outdoor about headlamps cited the brand’s quality to me without prompting. Chew that over.

Petzl is a reputable company but I can't recommend it when stacked up against the Black Diamond. For example, take the Petzl E93 PS Tikka 2 Headlamp. It costs about $30 and weighs 83g–on par with the Spot. While it offers two different LED lighting settings and a red light setting like the Black Diamond Spot does, the Tikka 2 only kicks out 40 Lumens for a maximum beam throw of 29 meters and a runtime of 120 hours. There's no way this is worth it.

Princeton Tec is a brand favoured by a lot of outdoorsy types in the know as well. If you're on a tight budget and in the market for lighter headlamp, theirByte headlamp is a great option and can be had for as low as $13. It runs off of two AAA batteries and only weighs 64 grams–so light you could almost forget that you'd packed it. However, the Byte's reduced sizes means it packs less features and power than the Spot. The Byte's maximum output is 35 Lumens with a maximum runtime of 146 hours. That might be enough light for close to mid-ranged tasks, but for safety's sake I wouldn't want to wear it trail running or riding cross-country at night. For another $30 and an additional 26 grams, I'd rather spring for the additional light and versatility that the Spot affords.

If you plan on using your headlamp on the water, the Black Diamond Storm is a great choice. It has a maximum output of 100 Lumens and is rated to be submerged in up to a meter of water for 30 minutes before it fails. You can find it for as little as $40 online. That’s $7 more than the Spot. While that might seem like a better deal to some, the Storm requires four AAA batteries to operate, and has a waterproof gasket, both of which add to the headlamp’s weight. Additionally, there’s not much difference in the amount of light you’ll get from 90 and 100 Lumens. If it were me, I’d go for cheaper and lighter unless I was afraid of losing my headlamp in the drink–especially when you consider the fact that the Storm's maximum burn time is 125 hours — 75 hours less than the Spot.

Last Year’s Model
Black Diamond last updated the Spot in 2011. The older version of the headlamp offered a similar feature set to latest iteration, but was only capable of producing a maximum of 75 Lumens. As they look similar, be sure that you check the number of lumens the model you're looking at offers before you buy it.