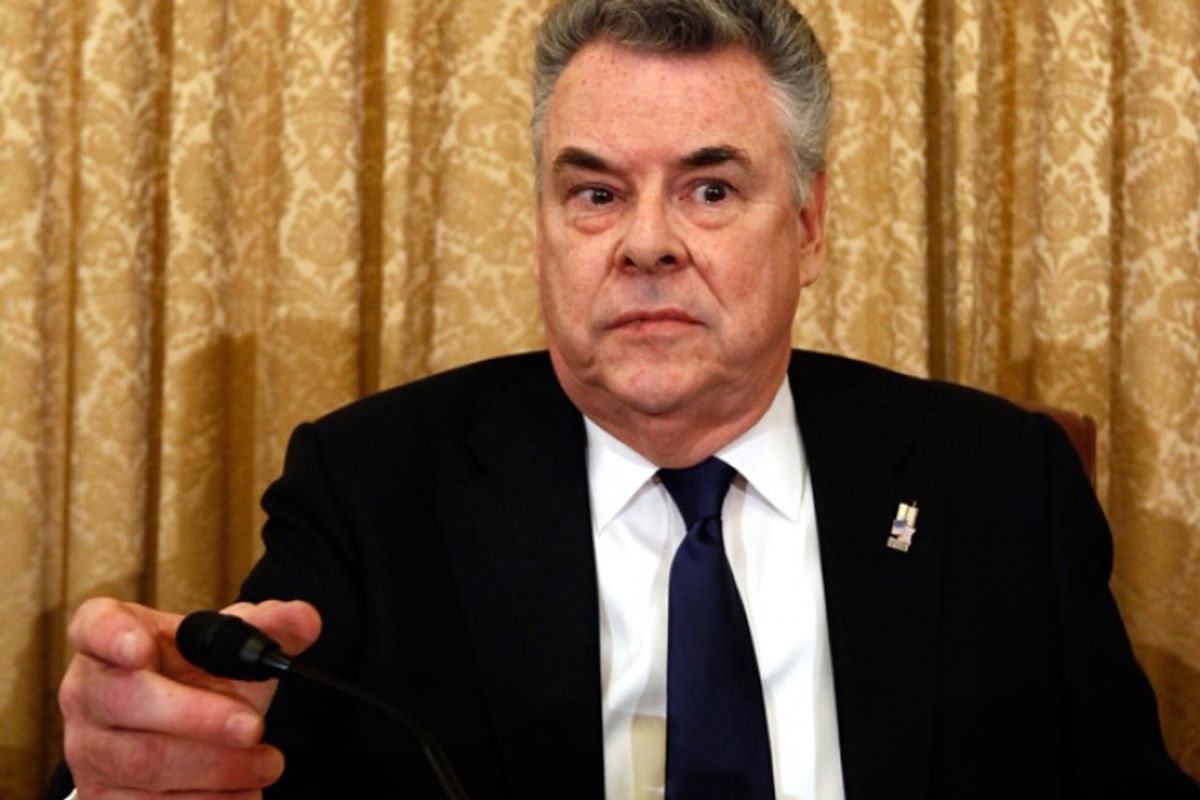 Everywhere Rep. Peter King, R-N.Y., looks, he sees Muslims. You know, the gun-wielding, burqa-wearing, America-hating, “stealth-jihadi,” “creeping Shariah,” terrorist type. They enthrall him. So much so, in fact, that not only has he built his entire political career on championing the fight against them, but he’s also fantasized about their destruction in the pages of a mediocre techno-thriller he wrote in 2003, sensationally titled "Vale of Tears."  “This is something I am absolutely fixated on,” he once admitted.

It came as little surprise, then, when the jowly Long Island sexagenarian announced that he would hold his fifth (count ‘em) congressional hearing on the supposed “radicalization” of the American Muslim community.

The spectacle is set to kick off tomorrow in room 311 of the Cannon House Office Building — a stately chamber that in 1967 hosted the House Committee on Un-American Activities’ investigation into links between race riots and Communist infiltration. It is an appropriate place for King’s witch hunt, one might say.

This time, the panel plans to examine the American Muslim community’s “response” to the four previous hearings. Translated into Peter King language, this means that they will likely consider every single instance of objection or protestation to the inquiries as further evidence that Muslims are a hostile group or religious believers.

It is that kind of logic — stereotyping an entire religious faith as “radical” before a national audience and then pointing to their complaints about being prejudiced as proof that they are indeed fanatics — that has typified King’s hearings thus far.

Objectivity, though, has been absent from this hyper-partisan heyday for a reason: It would disprove King’s accusations. Better, then, for him to avoid the evidence that would make him look bad — evidence that suggests that Muslims do cooperate with law enforcement officials and that claims of increased “radicalization” within the Muslim American community are simply unfounded.

Attorney General Eric Holder has stated that cooperation from the Muslim and Arab-American communities has been “absolutely essential” in identifying and preventing potential terrorist threats. FBI Director Robert Mueller noted that, "Many of our cases are a result of the cooperation from the Muslim community in the United States." Former National Counterterrorism Center director Michael Leiter argued that “Many of the tips to uncover terrorist plots in the U.S. come from the Muslim community,” and Los Angeles County Sherriff Lee Baca lauded the praise that his office receives from Muslims living in California. Moreover, the Triangle Center for Terrorism and Homeland Security reports that the Muslim-American community has been one of the largest sources for information on potential attacks in the U.S., and the Muslim Public Affairs Council shows that Muslim cooperation has been key to foiling some 40 percent of al-Qaida-related attacks in the U.S. since 2001.

Given that the NYPD, the FBI, the CIA and several other law enforcement agencies have spied on the American-Muslim community and trained their agents using material that is unquestionably Islamophobic, it’s a wonder that they feel compelled to cooperate at all. Still, they have, but that’s not good enough for King.

“I’m aware of a number of cases in New York where the community has not been cooperative,” he said. He has never explicitly stated just how many cases he is aware of and when pressed, he grimaces, clears his throat and huffs about his close friends, the police, who share secret information with him that must remain “off the record.”

And so, in place of evidence and objectivity, King’s hearing will feature the testimony of one of his friends who will tell him exactly what he wants to hear. Zuhdi Jasser, a Muslim-American physician who moonlights as a self-described “expert” on Islam will appear before the panel a second time (he testified during the first hearing) to enumerate the ways in which members of his faith group have supposedly gone astray.

Jasser is a rising star in the Islamophobia industry. His wavy black hair, voguish eyeglasses, colorful neckties, and eagerness to toe the Republican line suggest that he is a “good Muslim,” one who is fully assimilated in the American culture. He is much like a trophy — someone whom various agitators of the political right hold up as shining proof for their talking points. “[You are] the one Muslim that we were all searching for after 9/11,″ Glenn Beck once gushed.

Muslim activist groups have protested Jasser’s influence in the political sphere, including his recent appointment to the U.S. Commission on International Religious Freedom. They point to his involvement with anti-Muslim groups and his litany of stereotypical statements. Jasser has been featured in several anti-Muslim films, including "Islam vs. Islamists" and Newt Gingrich’s 2012 documentary "America At Risk: The War With No Name," and was the narrator of "The Third Jihad," a propaganda flick produced by Aish HaTorah, a radical Israeli settler group in the West Bank that refracts anti-Muslim animosity through the conflict between Palestinians and Israelis. The group was behind the 2008 film "Obsession: Radical Islam’s War Against the West."

Most recently, Jasser’s foundation, the American Islamic Forum for Democracy received a $10,000 donation from Nina Rosenwald, a right-wing Zionist who has spent her Sears Roebuck-inherited fortune fanning flames of Islamophobia.

If King’s stated intention is to shed light on the American Muslim community’s response to the previous hearings, Jasser’s presence is certainly not the way to do that. He is hardly a representative of the faith group and is despised by many mainstream American Muslims.

But King must surely know that.

He also must know that this is not an impartial hearing that seriously examines issues of radicalization and extremism, but rather, a political performance in which a carefully selected cast appears before an audience and delivers a rehearsed script under the guise of fairness and neutrality.

Nathan Lean is the research director at Georgetown University's new project on Islamophobia, the Bridge Initiative. He is the author of three books, including, most recently, "The Islamophobia Industry."