Do we need a businessman in the White House?

Americans are right to prefer career politicians as presidents 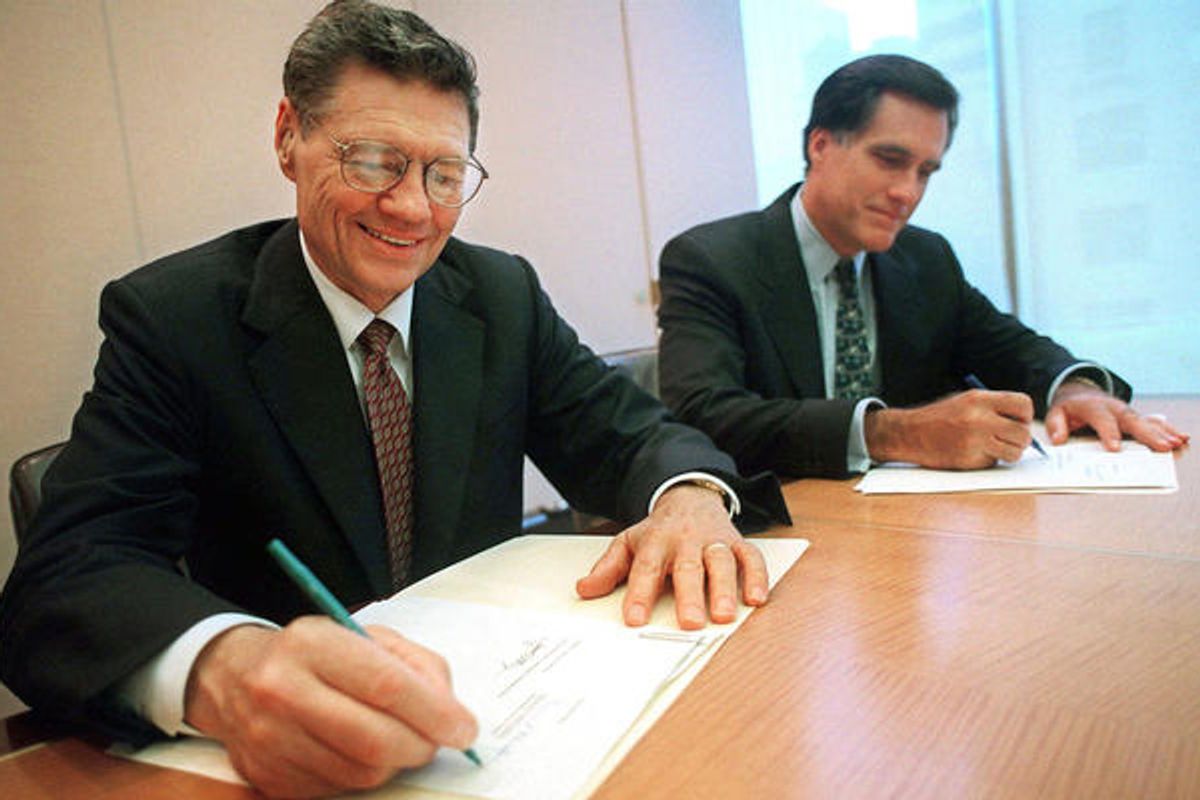 Does America need a successful former businessman for president? Does Mitt Romney’s background in the private equity industry give him a unique understanding of the economy denied to Barack Obama, whose resume includes only jobs in the nonprofit sector, the academy and politics?  These are among the themes of  Romney’s campaign to win the White House for himself and his party in this fall’s election.

At first glance, it might seem plausible that successful private sector leaders understand the modern national and global economies. But doing well in one part of the economy is quite different from understanding what is good for the economy as a whole.

Making a fortune running a widget company does not make you an expert on quantitative easing, or nontariff barriers used by Asian mercantilist countries, or the impact of productivity growth and population estimates on the future of Social Security. Unless you have been spending your nights and weekends studying these arcane subjects while selling widgets by day, your opinion on these subjects is of no more value than that of any random bystander in the street.

But, it might be objected, politicians are not expected to be experts in all of the different subject areas they encounter. True, but career politicians have a greater sense of what the public policy debates are and what experts can be taken seriously than a rich amateur who decides in middle age to take up a completely new career in government. Having taken part in hearings on subjects from domestic policy to international relations, any senior member of the House or Senate would be more familiar with most of the topics of concern to a president than somebody who spent twenty or thirty years at Widget, Inc.

Running an economy that is good for business is radically different from running a business, in a number of ways.  To begin with, most businesses focus on providing one or a few goods or services. But modern governments are responsible for everything from protecting citizens from foreign enemies and domestic criminals to countering recessions and depressions and educating the next generation. The simplest government is far more complex than the most complicated private firm.

Just as it has fewer tasks, business has fewer constituencies than government. Nowadays most American businesses are guided by the philosophy of “shareholder capitalism,” which holds that the purpose of a company is to maximize the short-term profits of its shareholders.  The interests of workers, the community and the nation are somebody else’s problem. That somebody else is the government, which must look after all of the interests that are ignored by the typical business in its single-minded pursuit of profit for its owners.

The success of a business can be judged by one or a few criteria — quarterly profitability, market share.  ut how is the success of a nation-state to be measured?  By GDP trend growth? Balanced budgets? Unemployment rates? Polls measuring public happiness or satisfaction?

Yes, governors and presidents head executive branches, and yes, in theory the president is commander-in-chief. But a private sector CEO possesses the kind of despotic authority that presidents in our system can only fantasize about. For example, the president’s ability to hire and fire individuals is strictly circumscribed by civil service regulations and military procedures, to say nothing of political considerations.

In the typical American company, budgetary control rests with the CEO. But in America’s system of separated powers, Congress, not the president, controls the purse strings. The president’s budgetary power is limited to recommendations.

Finally, business executives may be blinkered by narrow perspectives that are actually harmful to the system in which they flourish. That is because what benefits each particular business in the short run may be bad for the capitalist economy as a whole in the long run. Many business executives would prefer to pay less in wages and taxes. But if every business pays as little to its workers as possible, consumer demand in the economy as a whole may collapse, bringing down businesses which require mass markets with it. And without adequate taxes crime, corruption and poor infrastructure will impose rising costs on the private sector.

If businessmen made good presidents, then why have there been so few? The vast majority of American presidents have been career politicians, who moved up in state politics before aspiring to a national stage. And most presidents who worked in the private as well as the public sector were lawyers, not corporate managers or investors. The only individual who went from being a private sector tycoon to the Oval Office was Herbert Hoover — and he became president only after serving as Commerce Secretary under presidents Harding and Coolidge. Herbert Hoover is probably not a precedent that the Romney campaign would like to point to.

American voters tend to choose presidents who were previously governors, like George W. Bush, Bill Clinton, Ronald Reagan, Jimmy Carter, Franklin Roosevelt, or vice-presidents, like George Herbert Walker Bush, Lyndon Johnson, and Harry Truman (because of Watergate and Nixon’s resignation, Gerald Ford became both vice-president and president without having ever been elected to either position). Being governor, particularly of a large state, is probably the best preparation for being president of the United States. (This is not true in states like Texas, where, under the neo-Confederate post-Civil War state constitution, governors like George W. Bush are figureheads with little real authority to prepare them for the challenges of the White House).

The fact that Mitt Romney was a Republican governor of Massachusetts, a generally liberal Democratic state, would have worked in his favor, in any other time. But the capture of the Republican party base by Tea Party conservatives forces Romney to downplay his accomplishments as a governor — including Romneycare, the state health care planned that served as one of the models for Obamacare. And so Romney has emphasized his private sector past, which, whatever you think about Bain Capital in particular or private equity in general, is much less relevant to the challenges he would face as president than his public career as a governor.

Being a success in business and supervising an economy that is good for business are thus two different things.  A fish in an aquarium can be successful without understanding the workings of the aquarium in which it swims. And a good aquarium tender need not be a fish.