Issa finally gets his trophy 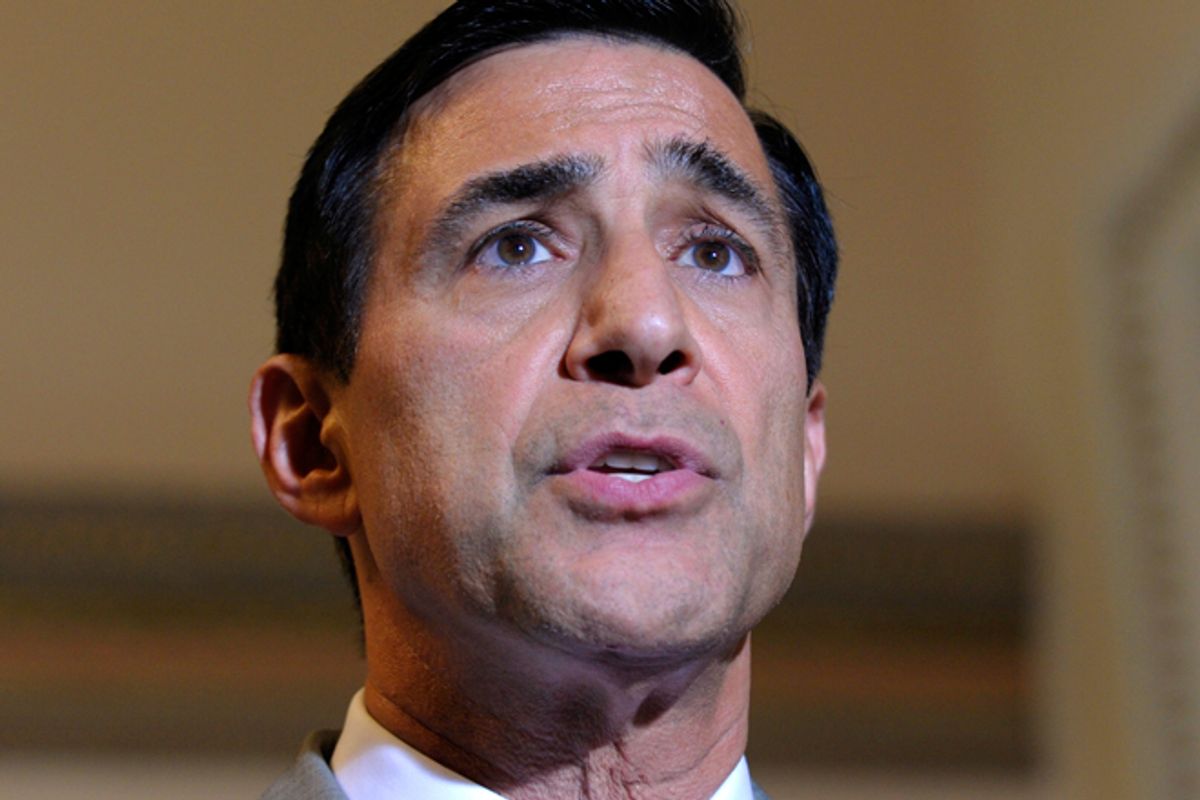 California Republican Rep. Darrell Issa, the chairman of the House Oversight Committee, finally got his big trophy and moment in the cable news sun today when his committee voted to hold Attorney General Eric Holder in contempt of Congress, following nearly seven hours of testimony on the ATF’s botched "Fast and Furious" gun scandal.

The action, which came in spite of a last-minute move by the White House to claim executive privilege, now tees up the full GOP-controlled House to hold Holder in contempt, which it is expected to do soon. The vote is arguably a partisan witch hunt, but it’s also a long time coming and a rare big win for Issa, who entered his chairmanship with an extremely ambitious agenda that has largely fizzled.

Leading up to and following the 2010 elections, Issa was giddy at the chance of going toe-to-toe with Obama, whom he called “one of the most corrupt presidents in modern times” in an interview with Rush Limbaugh in October of that year. A month later, he walked back the claim. “If I had to do it over again, I’d have parsed my words a little more carefully,” Issa told CNN’s Situation Room. “Do I think the president is personally corrupt? No. I should never have implied that.”

That big bravado followed by small payoff would prove typical of Issa’s chairmanship. Four days after the 2010 election, Issa declared he would hold hundreds of hearings over the next two years: “I want seven hearings a week, times 40 weeks.” That works out to 280 hearings a year. For some context, when Democratic Rep. Henry Waxman chaired the same committee under George W. Bush, he held 203 oversight hearings over two years. In the January he was sworn in, Issa unveiled a long hit list of upcoming investigations on everything from WikiLeaks to Fannie Mae and Freddie Mac, to the FDA, to the Financial Crisis Inquiry Commission. He even promised  to investigate George W. Bush. “I’m going to be investigating a president of my own party, because many of the issues we’re working on began [with] President Bush or even before, and haven’t been solved,” he told MSNBC. “The enemy is the bureaucracy, not necessarily the current occupant of the White House.”

This seriously worried Democrats at the time. "It's pretty clear that a lot of them are chomping at the bit to do the kind of investigations à la Clinton-style impeachment hearing and I don't think people want to go back to that," Rep. Chris Van Hollen, D-Md., a high-ranking Dem, told Politico.

But Issa often ended up shooting blanks. For instance, there have been just five hearings so far in June, just five in May, and four in April. There were 10 in March, but even that is a far cry from the 28 per month he would need to be hitting to meet his goal of 280 a year. His investigations into WikiLeaks, Fannie and Freddie, the FDA, and countless others have failed to expose any massive wrongdoing by the administration and after a year and half, he has little to show for them.

For instance, there was the case of Joe Sestak, a Democratic Senate candidate whom Issa claimed the White House had bribed in order to drop out of a primary against Republican-turned Democrat  Arlen Specter. "I believe they committed a crime," Issa said in 2010, adding that it could be “Obama's Watergate.” But as soon as he got into office in 2011 and in a position to investigate the affair himself,  he declined. “So are you going to investigate the Sestak case?” CNN’s Ed Heny asked on Jan. 2. “No we're not,” Issa replied.

Then there was the time that he vowed to investigate members of Congress who received cushy loan deals from scandal-plagued mortgage lender Countrywide. Issa promised “significant additional findings.” “The American people have a right to know ... to get all of the facts so that the American people can judge for themselves who should be held responsible and accountable,” he said in early 2011. A year later, he found just four lawmakers who had received the loans. But when he forwarded the information to the House Ethics Committee, he kept the names secret, despite earlier saying Americans had a right to know. Why? Democrats pointed out that three of the four names were Republicans.

Other investigations bordered on fringe absurdism, like when he asked the Department of Justice to investigate ACORN more than a year after it went extinct. There was also the hearing he held probing the Affordable Care Act’s contraception mandate, which famously included a panel featuring zero women.

Incidentally, one of Issa’s most successful investigations was into his own spokesperson, who it turned out was leaking information to a New York Times reporter. At least in that case, Issa got someone fired.

There was a clear precedent for Issa to follow: Dan Burton.  As chairman of the oversight committee in the 1990s, he went after the Clinton White House with a vengeance, deploying 1,052 subpoenas. He even ordered the Clintons to turn over their Christmas card list and tried to demonstrate his point by shooting a pumpkin in his backyard. Burton may have been better at it than Issa, but his strategy also may have backfired. Clinton remained popular and even some Republicans think Burton’s aggression may have actually helped the president, making him look like a victim of unfair partisan attacks.

One could also argue that the fact that the Obama administration had to claim executive privilege for the first time today suggests that Issa has been less than successful in dogging them. So today’s vote is critical to Issa’s legacy, helping to salvage an otherwise disappointing tenure. And despite the contempt vote, Fast and Furious has proven a slog, taking over a year and half after being largely ignored by the non-Fox News media (Fox covered it plenty). Rush Limbaugh today to a caller frustrated by the slow pace of Issa’s investigation into Holder: “You could, on the other hand, credit Issa for delaying this until an election year when more people are paying attention, when it'll have more impact.”