Mitt Romney is rumored to be considering as his V.P. the former rival who may be more boring than he is 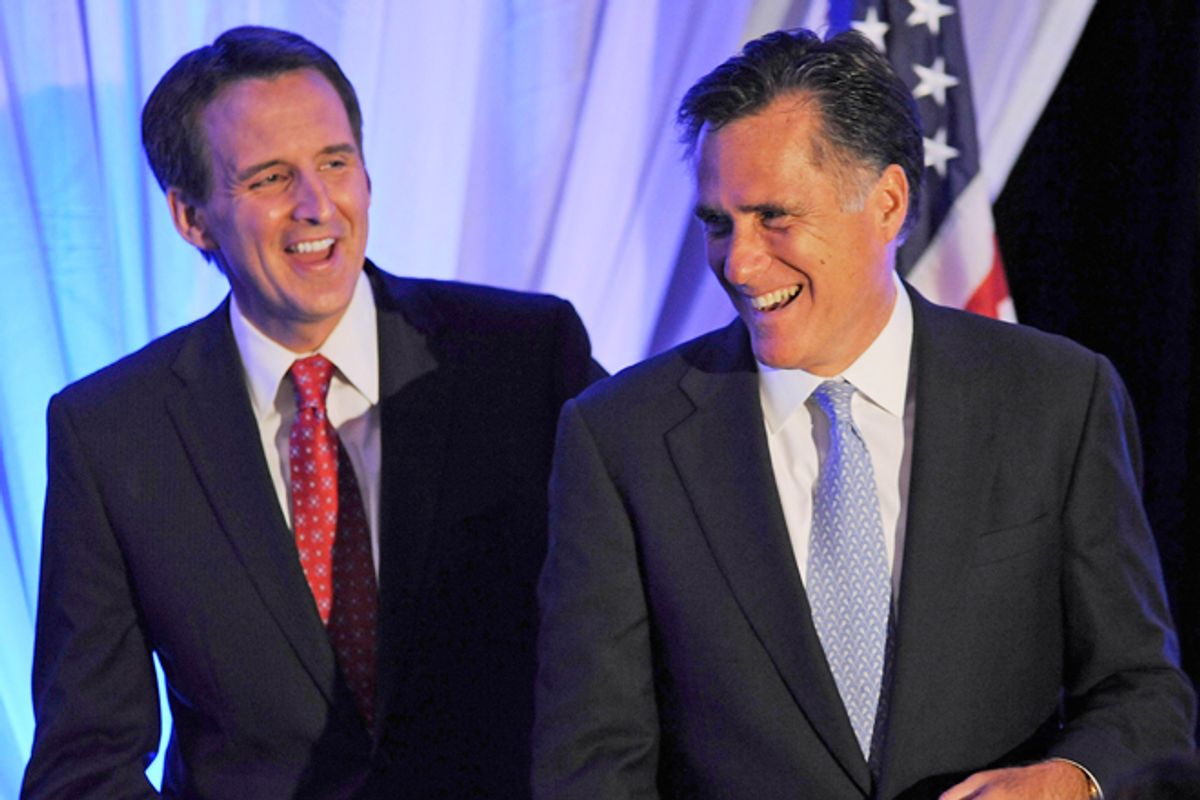 Politico reporters Maggie Haberman and Alex Burns are apparently pretty depressed at how shallow and inane this 2012 presidential campaign is turning out to be, so I hope they don't read this article by their esteemed colleague Mike Allen, Politico's mascot and the undisputed king of pointless minutiae, who today has a real "scooplet": Mitt Romney might pick Tim Pawlenty as his running mate. Or, in "POLITICO"-speak, "Tim Pawlenty's stock soars in Romney-world." (Candidates have worlds and stock, yes.)

According to Allen and Politico co-founder Jim VandeHei, Tim Pawlenty is definitely going to be the running mate unless the prior conventional wisdom turns out to have been correct and it's still Rob Portman. (It's probably still Rob Portman.) Romney's "team" loves that Pawlenty is ... a guy, who doesn't have anything specifically wrong with him. This is also why various pundits thought he was the "dark horse" candidate for the nomination, until it turned out that no one, anywhere, could come up with any reason to vote for Tim Pawlenty. He was also almost John McCain's running mate in 2008, but John McCain wanted to pick someone more interesting.

This is most likely just the campaign doing that thing where they "float" a name to see what sort of response it gets, and the response this will get is that YouTube of a puppy that is super sleepy but trying really hard to stay awake.

This about sums it up:

Pawlenty is strong where Romney is weak — with the regular-guy, working-man connection with voters in casual settings.

“Pawlenty will walk up and put a supporter in a headlock,” said a Republican consultant who was startled to witness just that. “He provides a nice yin and yang to Romney.”

Haha what a "regular guy" thing to do, to grab a stranger and perform a wrestling hold on him.

In reality, and not the twisted world of consultants who are unnamed for absolutely no fucking reason whatsoever, Pawlenty is weak in most of the same places Mitt Romney is weak -- boring, hated in own state -- but unlike Mitt Romney he wasn't born rich and isn't a Mormon. He is an ex-Catholic evangelical who is probably just barely a millionaire.

Otherwise, though, he's a white former moderate governor who abruptly became a hard-right conservative and who has no chance at winning his home state. (As I am fond of pointing out, because no one ever does, he won his two terms as governor with less than 50 percent of the vote each time.) He's basically a younger Mitt Romney with worse hair. (So, Romney might actually pick him!)