Many Obama supporters are mum about policies they hated under Bush. Here's why 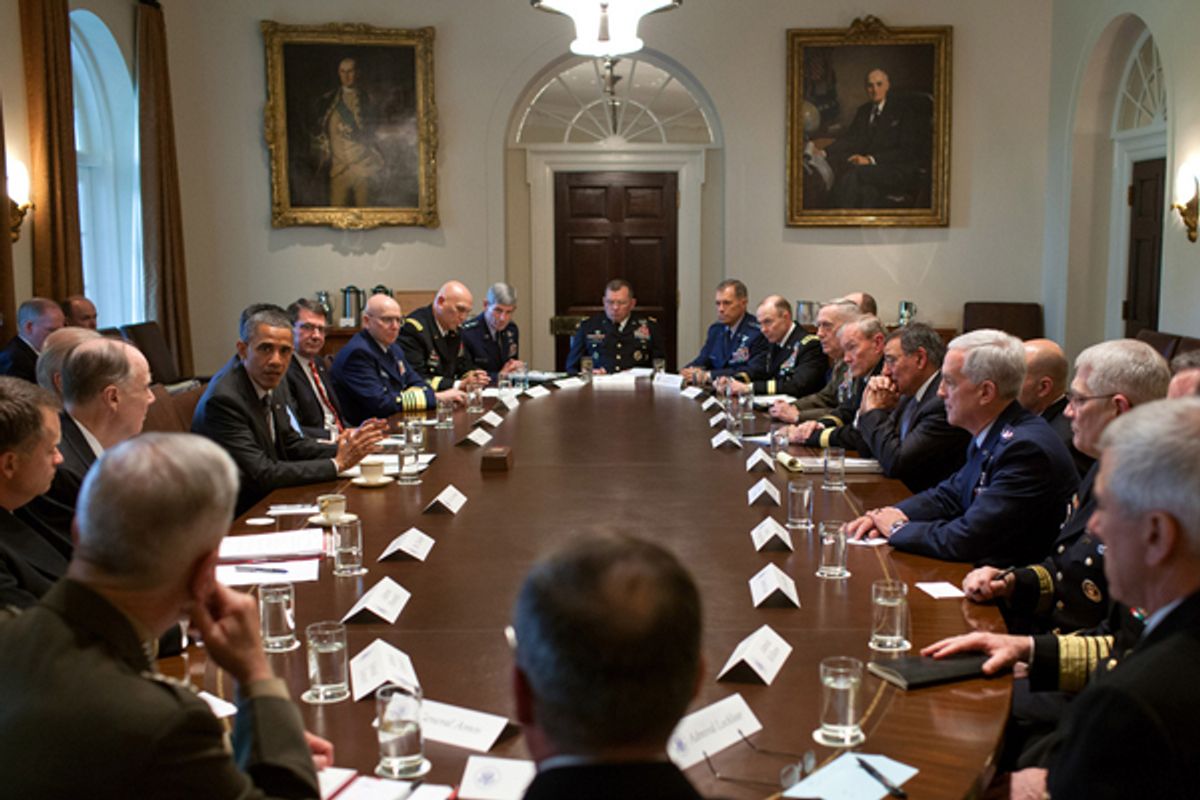 President Obama meets with Combatant Commanders and senior military leadership in the Cabinet Room of the White House. (The White House/Pete Souza)
--

If you want to know why liberals are so tongue-tied about Barack Obama's not-so-liberal national security policies -- from his maintaining the Bush administration's state secrets prerogatives to his expanded use of drones to his so-called kill list – it helps to read Eric Alterman and Kevin Mattson's sweeping "The Cause: The Fight for American Liberalism From Franklin Roosevelt to Barack Obama." I've always thought hawkish Democrats were trying to shake off the GOP charge that their left flank caused the U.S. to lose Vietnam. Reading "The Cause," I realized they were actually still fighting the allegation that they lost China in 1949.

Liberals had to declare they weren't Communists or Soviet-loving pacifists in the 1940s and '50s, until John F. Kennedy saved them by out-hawking Richard Nixon about a fantasy "missile gap." Then they went from having to separate themselves from New Left antiwar revolutionaries in the '60s and '70s, to fending off Reagan's claim that they'd appeased the Soviet Union by refusing to build his beloved Star Wars boondoggle. Bill Clinton's tough strikes against the former Yugoslavia and Iraq shook that image a little bit (in fact, Republicans became the anti-interventionists). But after 9/11, Republicans were back to charging that Democrats appeased the enemy, and Democrats were back to groveling to prove that wasn't true. A stunning 29 Senate Democrats voted to authorize the Iraq war, including John Kerry and Hillary Clinton.  Now I know it wasn't just about Vietnam, but about China. Liberals have spent the last 60-plus years pleading with the nation to understand they're not un- or anti-American.

I think that's at least part of the reason many Democrats, even most liberals and some progressives, have stayed silent as Obama escalates drone actions against Pakistan and even claims the right to assassinate American citizens who are believed to be intimately allied with al-Qaida.  Ari Melber probed the strange silence about Obama's tough national security policies on the left in the Nation this week, asking "Do Liberals Support Obama's Kill List?"

So far, most elected Democrats, liberal interest groups and progressive commentators have almost entirely avoided the issue. (There are some notable exceptions: the ACLU, Glenn Greenwald, Katrina vanden Heuvel, Jeremy Scahill, Eliot Spitzer, the blog FireDogLake, Democracy Now! and editorials by the New York Times and The Nation.) In the Senate, foreign policy–minded Democrats have focused more on criticizing the leak of the program than its content.)

Yet given the last 60 years, you can see why it's a relief to be able to answer the Joe McCarthys and the Karl Roves and the Dick Cheneys of the right with dead enemies, even if some people have qualms about the way they were killed. Obama has provided an unexpected defense against those right-wing bullies, a political gift liberals are reluctant to criticize.

Back in 2008, Obama was a gift liberal and progressive Democrats didn't quite deserve. Out of the arid desert of the Bush years he emerged, to quench every thirst. Well, not every thirst – I didn't think he was sufficiently partisan or populist during the primaries, though I came to support him – but almost.

He was against the Iraq war, but he wasn't a peacenik -- I'm against stupid wars, he said. He promised to double down in Afghanistan and even go into Pakistan without permission to get Osama bin Laden. Joe Biden, Hillary Clinton and John McCain criticized and even mocked him on that last point, he sounded even mas macho than Bush, with all of his unilateral warmongering. I'm not sure what peace-minded progressive Democrats who worshiped Obama thought at the time. No doubt some hoped he was just saying what he needed to get elected, but he didn't mean it.

That may be one reason some progressives are silent about Obama's muscular national security policy today, even if they disapprove: They expected it all along.

Others, though, may have come to approve. I've seen no poll data about Obama's "kill list," but polls do show that Democrats tend to support national security policies they once opposed after Obama embraces them. An ABC News-Washington Post poll last February found that 67 percent of moderate to conservative Democrats, along with 53 percent of liberals, now support keeping Guantanamo Bay open. (Congress denied the funding the president would have needed to close it; critics say he ducked the fight.) A month after the president took office, pledging to close it, 64 percent of Democrats wanted it closed.

Likewise, in 2006, under Bush, 53 percent of Democrats thought the Patriot Act went too far, according to the Pew Research Center. In 2011, after the president asked for its extension, only 40 percent said it went too far.  And earlier this year (before the kill list revelation) fully 77 percent of liberal Democrats supported Obama's drone policy (the question wasn't polled under Bush), with 55 percent of them also supporting strikes on U.S. citizens.

The explanation is surely more complicated than rank partisanship or blind Obama worship. On one level, it makes sense: If you trust the man you voted for to do the right thing, you're more likely to assume the things he does are the right thing, especially when his actions involve murky facts as well as murky questions of ethics. George Packer says as much in the New Yorker: "Often, foreign policy—which by definition is largely out of American control—is simply a matter of not doing the wrong thing, the unwise thing. On that count, I trust Obama more than any politician in my lifetime."

It's also possible liberals are getting more tough-minded when it comes to war, especially against a furtive enemy that isn't a nation. Packer and Andrew Sullivan, not exactly a liberal but a loyal Obama supporter, defend the administration's use of drones as causing fewer civilian casualties than traditional warfare and a necessary tool against shape-shifting enemies. In Sullivan's words:

I think the recourse to drone warfare is about as reasonable and as effective a strategy as we can find. It plays to our strengths - technology, air-power, zero US casualties, rather than to our weaknesses: occupying countries we don't understand with utopian counter-insurgency plans that end up empowering enemies Moqtada al Sadr and crooks like Hamid Karzai, and turn deeply unpopular at home. Given our country's fiscal crisis, massive expensive counter-insurgency is no longer a viable option.

Since Sullivan is also a deficit hawk, that last is a moral and intellectual dodge that's beneath his normal standards. Packer put it this way: "He's devastated the top ranks of Al Qaeda, and if legally dubious drone attacks are his means for doing so—well, life and foreign policy are full of unpleasant trade-offs, and this is one I’m willing to take." (Glenn Greenwald has answered both here).

Brown University's Michael Tesler has gotten a lot of attention for his provocative research showing how even non-racial questions have been "racialized" in the age of Obama, with racially conservative whites turning against policies merely because Obama supports them (famously, Slate's Sasha Issenberg wrote, they like Portuguese water dogs better when they're told Ted Kennedy owned one than when told Obama does). But Tesler has also found the inverse: African-Americans and racially liberal whites are more likely to support policies they know Obama backs. That worked positively in the case of gay marriage. It may be working less positively on national security and civil liberties issues.

But liberals may be following a president they like to a place they'll find horrifying when they're stuck there with a Republican. Given how close the polls are, we ought to be thinking about how we'll like all of these policies when carried out by President Romney.

I think some of the lack of liberal and progressive criticism is combat fatigue: Fighting the right on so many battles, it's a kind of relief to have the foreign policy front comparatively well defended, even if we ourselves aren't fully on board. I'll admit, that's part of why I rarely write about it. President Romney wouldn't be any more of a civil libertarian on these issues, and he'd be worse on everything else, so I tell myself I'll work on all of this during Obama's second term. I've also learned over time that domestic policy is what I know best, and where I can maybe bend the arc of justice most effectively. And yet I'm hugely grateful that Glenn Greenwald is scrutinizing Obama's national security excesses at Salon, despite all the angst and abuse from Obama's die-hard defenders.

I've actually learned a lot from (some) die-hard Obama defenders. They've made me think hard about what the president can and cannot do on his own. Progressives tend to fetishize presidential power and castigate presidential neglect, while ignoring the huge role of Congress, as well as state and local officials, in shaping policy as well as public opinion. I said early and often, back when progressives were particularly restive in 2010, that it was silly to primary Obama from the left – if we want a more progressive president, we should work to give him a more progressive Congress. That said, the commander in chief has a singular role on national security, and progressive Obama die-hards look away from that. And they fetishize the president in their own way. They particularly fetishize his goodness. I can slide that way myself. Flash a photo of the first family before asking me a question about the kill list, and I'm sure I'm more likely to support it. Obama has an outsize positive place in our nation's history, and that's tough for many of us to resist.

The fact is, a majority of Americans support Obama's most repressive policies, from maintaining Guantanamo to extending the Patriot Act to the expanded use of drones. The question for the left is how to change those attitudes. I fall out with some of Obama's critics on tactics and rhetoric. I'm alarmed at Obama's policies – yet I wouldn't call him a "murderer," as Jeremy Scahill did. On the day Obama ventured into the Trayvon Martin case, saying, "If I had a son, he'd look like Trayvon," I quarreled online with lefty Obama haters who thought that was a good opportunity to attack the president for ordering the killing of Abdulrahman al-Awlaki, the 16-year-old son of Anwar al-Awlaki, an American citizen and al-Qaida higher-up Obama also ordered killed in a drone strike. The time to question the president's moral decision-making wasn't when he was actually making an admirable moral decision, one that many in his base, particularly African-Americans, fervently applauded. Too many folks on the left prefer outrage and self-righteousness to effectiveness and coalition-building.

To me, the  lack of oversight and accountability is what's most disturbing about the powers Obama has claimed for himself. But I also know that within the American electorate, I'm in the minority. That February poll on Guantanamo, which found that Democrats had flipped to support keeping it open, also showed that majorities approve of Obama's broader foreign policy, national security and counter-terrorism policies. I'm not saying the left should go with the flow; I'm suggesting we think more deeply about how to turn the tide.