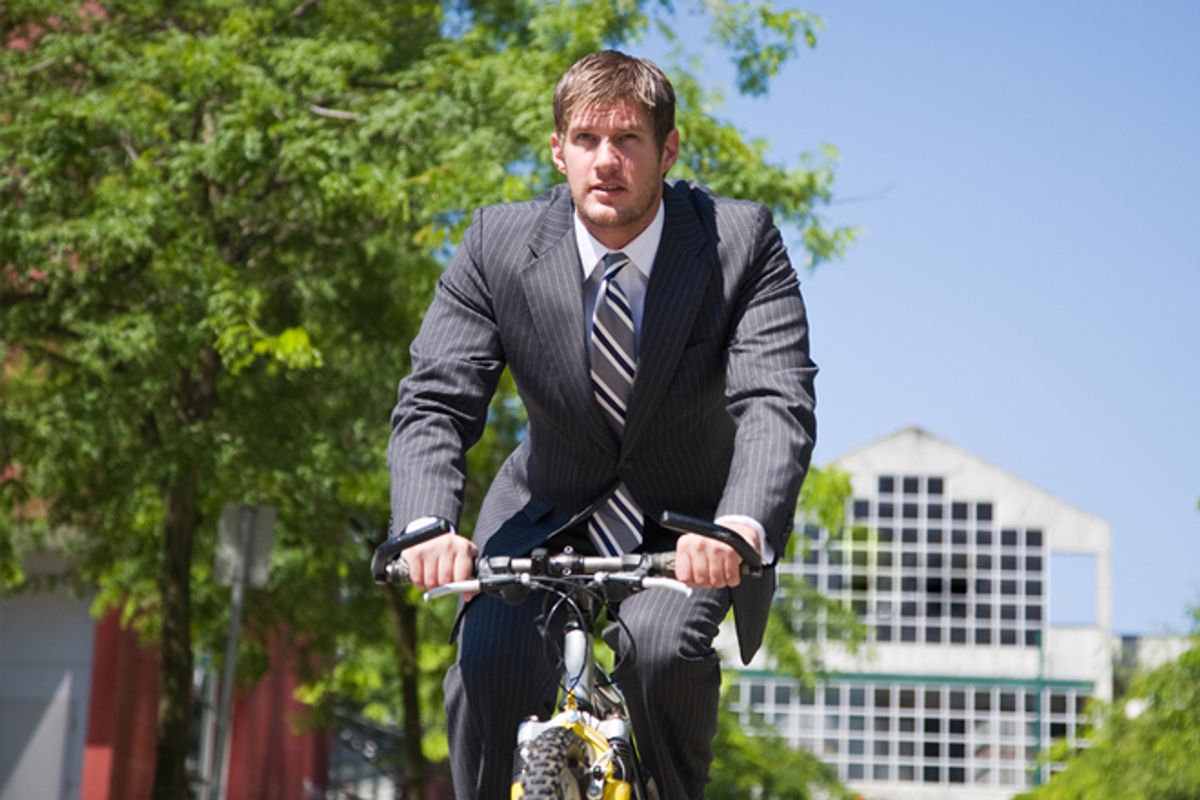 Why should Washington, D.C., subsidize its bikeshare system if it's mostly used by white people with college degrees? That's the question ReasonTV posed yesterday, and it's a good one to think about.

By most metrics, D.C.'s bikeshare system, Capital Bikeshare, is something to celebrate. Four thousand people use it every day. In its first year it exceeded projections for membership, revenue and number of riders. It's great to see a new transit option become so popular. The problem is, it's mostly popular with white people who have money to spend (though, for the record, the survey found that, while few poor people use the system, the average rider is slightly less affluent than your average Washingtonian).

The ReasonTV report was prompted by a survey that showed 95 percent of the system's regular users have college degrees, four-fifths are white, and only 7 percent make less than $25,000 a year. This ridership obviously doesn't reflect the demographics of Washington, D.C. Despite this, the system has received $16 million in subsidies -- $1 million of which was earmarked for transportation to benefit low-income residents.

First of all, you could point out that if 1/16 of Bikeshare's subsidies came from a fund for low-income transportation, and 7 percent of the system's users are low-income, that's just about the right proportion. Or you could show, as the Washington Post did, that that stat is twisted anyway -- most of that $1 million was earmarked “to support surface transportation projects and other related efforts that contribute air quality improvements and provide congestion relief." In other words: bikeshare.

Be that as it may, for libertarian ReasonTV, the obvious takeaway is that Bikeshare shouldn't be subsidized. Riders should either pay more in membership fees or just buy their own bike. Because libertarian ideology isn't generally focused on finding new ways to make the lives of poor people easier, there's a sheen of disingenuousness to the premise of the report.

But let's take the reporter at her word and assume that this is truly about the sure-to-get-clicks issue of cities subsidizing things that not enough low-income, non-white or less-educated people use. By this logic, we shouldn't be funding any parks in neighborhoods where most of the residents have money, white faces or college degrees. We should only have city-sponsored street fairs in the poorer parts of town. Public pools? Baseball fields? Waterfront esplanades? If the people using them are mostly white, moneyed or college-educated, then they don't deserve government support.

It's an argument that's carefully calculated to befuddle people who are used to arguing against inequality, and who typically rage against the idea of government handouts for the well-off. Suddenly, bikeshare users are being asked to justify a publicly funded system that's not used by everybody equally.

Except that we don't have to justify it, because it's public transportation.

And if it's public transportation, it gets subsidized, whether libertarians like it or not. We've always subsidized public transportation for a boatload of good reasons: It reduces congestion, it raises property values, and most cities function much better with it than without it. If the Reason reporter disagrees with public-transportation funding in general (and I suspect that she does) then that's the argument she should make, rather than pretend this is about the fairly small amount of funding for this bikeshare.

But if you're going to make a self-consciously provocative video that gets lots of attention, then bikes -- and the alleged limousine liberals who ride them -- are a much better target. "The government subsidy for bikeshare is basically a rounding error in the grand transportation budget," wrote Reuters' analyst Felix Salmon, "and I'm sure that the amount of government funds spent on maintaining roads in affluent suburban communities is orders of magnitude greater than the amount spent on bikes."

Not that the inequality issue doesn't matter. It's a serious problem, and this is a perfect opportunity to figure out how to broaden the system's appeal. Are there enough bikeshare stations in low-income neighborhoods? Are more low-income commuters shuttling children or packages to work? Is the credit-card hurdle too high, and if so, how can we make it easier to use the system? Maybe outreach is too confined to social media. Or maybe bikeshare needs a bigger government subsidy to bring prices into reach for those who can't afford them.

A lot of libertarian ideals are great for cities: freeing up development in historic districts, making business and liquor licenses easier to obtain, letting us smoke in our own goddamn parks. But not always. Urban governments subsidize all sorts of things that aren't absolutely necessary, because as investments, they often ultimately generate more wealth and a better quality of life. Bikeshare in Washington is doing this: It saves its users over $800 a year and increases traffic to local businesses. Figuring out ways that more people could benefit, rather than fewer, seems like a no-brainer.