Can modern women "have it all"? 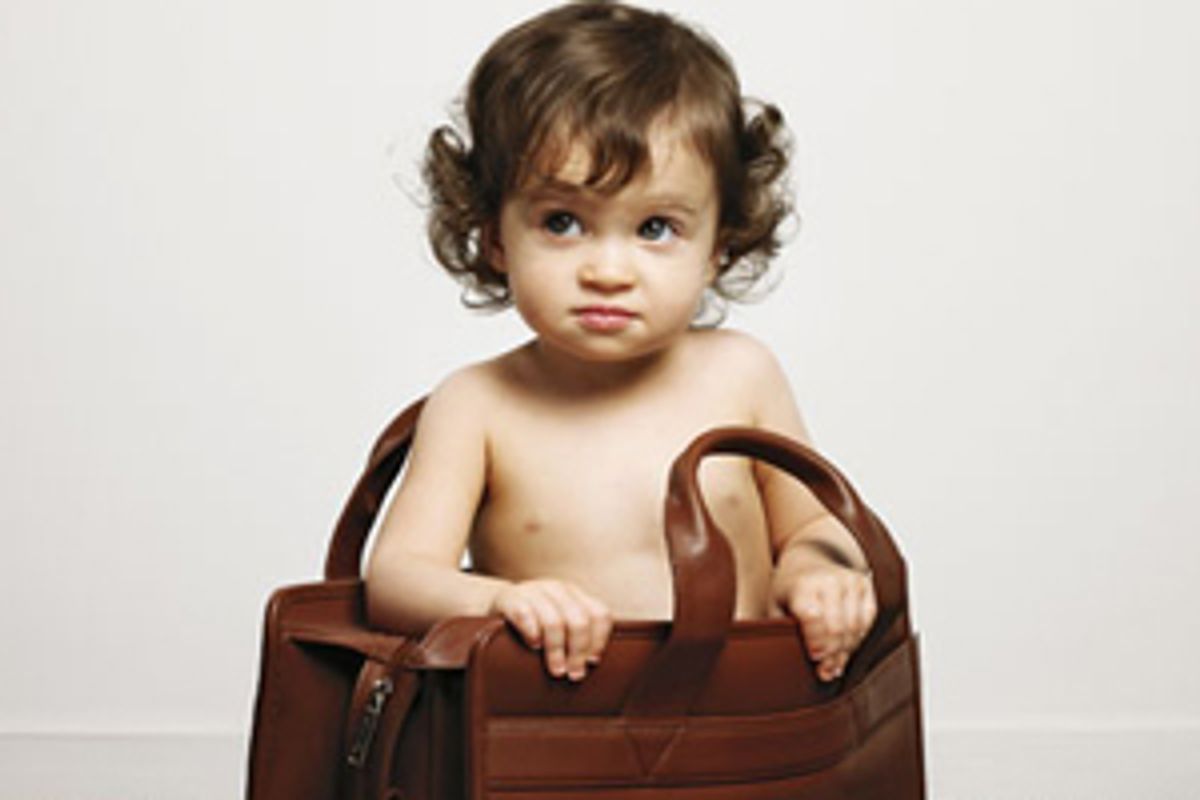 The Atlantic’s current cover story, headlined “Why Women Still Can’t Have it All,” depicting a toddler in a briefcase clutched by a headless woman in dark hose (whom I can only assume is Diane Keaton from 1987’s "Baby Boom") puts me in mind of a modest proposal: Working women should eat their babies, thus simultaneously solving the problem of childcare and what to make for dinner.

No, my proposal is this: We should immediately strike the phrase “have it all” from the feminist lexicon and never, ever use it again.

Here is what is wrong, what has always been wrong, with equating feminist success with “having it all”: It’s a misrepresentation of a revolutionary social movement. The notion that female achievement should be measured by women’s ability to “have it all” recasts a righteous struggle for greater political, economic, social, sexual and political parity as a piggy and acquisitive project.

What does “having it all” even mean? Affordable childcare or a nanny who speaks Mandarin? Decent school lunches or organic string cheese? A windowed office or a higher minimum wage? Public transportation that reliably gets you to work or a driver who will whisk you from kindergarten dropoff in time for the board meeting? Does it mean never feeling stress or guilt? Does it mean feeling satisfied all the time?

It is a trap, a setup for inevitable feminist short-fall. Irresponsibly conflating liberation with satisfaction, the “have it all” formulation sets an impossible bar for female success and then ensures that when women fail to clear it, it’s feminism – as opposed to persistent gender inequity – that’s to blame.

After all, if feminism is supposed to provide women with complete fulfillment, and allow them to have it all, then anyone who’s less than fully pleased by her lot – who works long hours, struggles to pay bills, spends more hours over dirty dishes than her mate, who’s guilty about missing her kid’s play or her business partner’s PowerPoint, who feels tugged in ways that she perceives her husband does not – is not simply experiencing firsthand the ways in which sexism, the economic divide, the wage gap and patriarchal models for public and personal life persist. She’s not even simply experiencing the human condition of dissatisfaction and yearning.

No. Thanks to the “have it all” phantom, she’s experiencing betrayal at the hands of feminism itself. She may well be betraying herself! The movement she actually needs more of – to advocate for universal daycare, better schools, a higher minimum wage, paid family leave, a workplace culture that doesn’t continue to treat all employees as if they were “men” in a historic sense, with wives at home taking care of their lives – takes the blame because thousands of years of sexual inequity have not been reversed fully in the past 50 years.

We don’t lay the same booby traps for men. We don’t constantly quiz and evaluate and poke and prod and take their emotional temperature, asking if they feel fulfilled and happy, if they have everything they want, if their every youthful aspiration has been met sufficiently, if they feel that they’re measuring up at the office, in the kitchen, in bed.  If we did, we might find out that they – especially younger ones, increasingly used to sharing workplaces and domestic and familial responsibilities with women – also feel stressed, guilty, anxiety-stricken, unfulfilled, questioning. But it’s not likely that we would then use their admissions of discontent to diagnose a larger male inability to balance effectively, or conclude that they are not realistically able to maintain the dominance they’ve enjoyed for millennia because having so much power is a) bad for them, b) unnatural or c) impossible. We’d probably just blame their dissatisfaction on feminism.

There are, in fact, many excellent things to say about Anne-Marie Slaughter’s piece about her experiences as a working mother during her two years at the State Department as the first female director of policy planning. She addresses some of the very points I make above, including a need to rethink professional schedules and men’s inability to have it all; she writes directly that the challenges she faced have to do with “the way America’s economy and society are currently structured.” Slaughter has provided a specific, high-test, personal version of a story that academics and feminists, including Arlie Hochshild, Linda Hirshman and Leslie Bennetts, have been telling for years about the distances feminism has yet to travel when it comes to reforming the domestic sphere and changing retro-male workplace culture.

But the Atlantic has made a damaging and dishonest error in selling her piece – in large part by relying on that facile, flawed “have it all” model, as well as with its cover image, which Jessica Valenti has identified as part of a photo genre: Sad White Babies With Mean Feminist Mommies and the story's accompanying video, titled "Have Feminists Sold Young Women a Fiction?" – not as a specific personal critique and a rallying cry, but as a broad statement of feminist futility, a blanket evaluation about the impossibility of female ambition and achievement. It’s particularly galling, since Slaughter, whom I admire deeply, admits in the piece that she has a career – as a tenured professor, author and international lecturer on foreign policy, the former dean of Princeton’s Woodrow Wilson School – that is emblematic of the possibilities that feminism has wrought.

And yes, it’s still hard, the deck is still stacked against women. I’m 15 years younger than Slaughter. My life has been easier than hers, because of women like her, but it’s still hard, and it would without question be harder if I were working at the State Department, though it's also true that my husband's life would also be harder if he were working at the State Department. It’s far, far harder still for the millions of women who don’t have my privileges or Slaughter’s privileges.

There are miles to go before feminism sleeps. But part of the point is: Look how many miles we’ve come, in such a short amount of time! We are still very much in the midst of reversing eons of gendered injustice, overheated headlines (from the, uh, Atlantic) about contemporary female dominance to the contrary. Brains are still getting rewired, systems are still being reworked to accommodate evolving roles. Backlash politics (like the packaging of this article, if not the article itself) pushes back against every female stride, every achievement, and there’s still enormous effort to put into righting gender (and racial, and sexual, and economic) injustices that make true equality elusive. A document like Slaughter’s offers a valuable testament to these remaining challenges. But its presentation as a deadening diagnosis of insurmountability is antifeminist, anti-woman, cheap and reactionary.

And that sucks. It sucks for all of us, who are so very busy – not aiming for complete satisfaction or amassing everything our hearts might desire – but busy working and living and getting by and fighting to pry open more doors so that more women might enjoy more kinds of opportunities than have been available to those who came before.