It's time to take the National Review's Kathryn Jean Lopez seriously, as depressing as that is 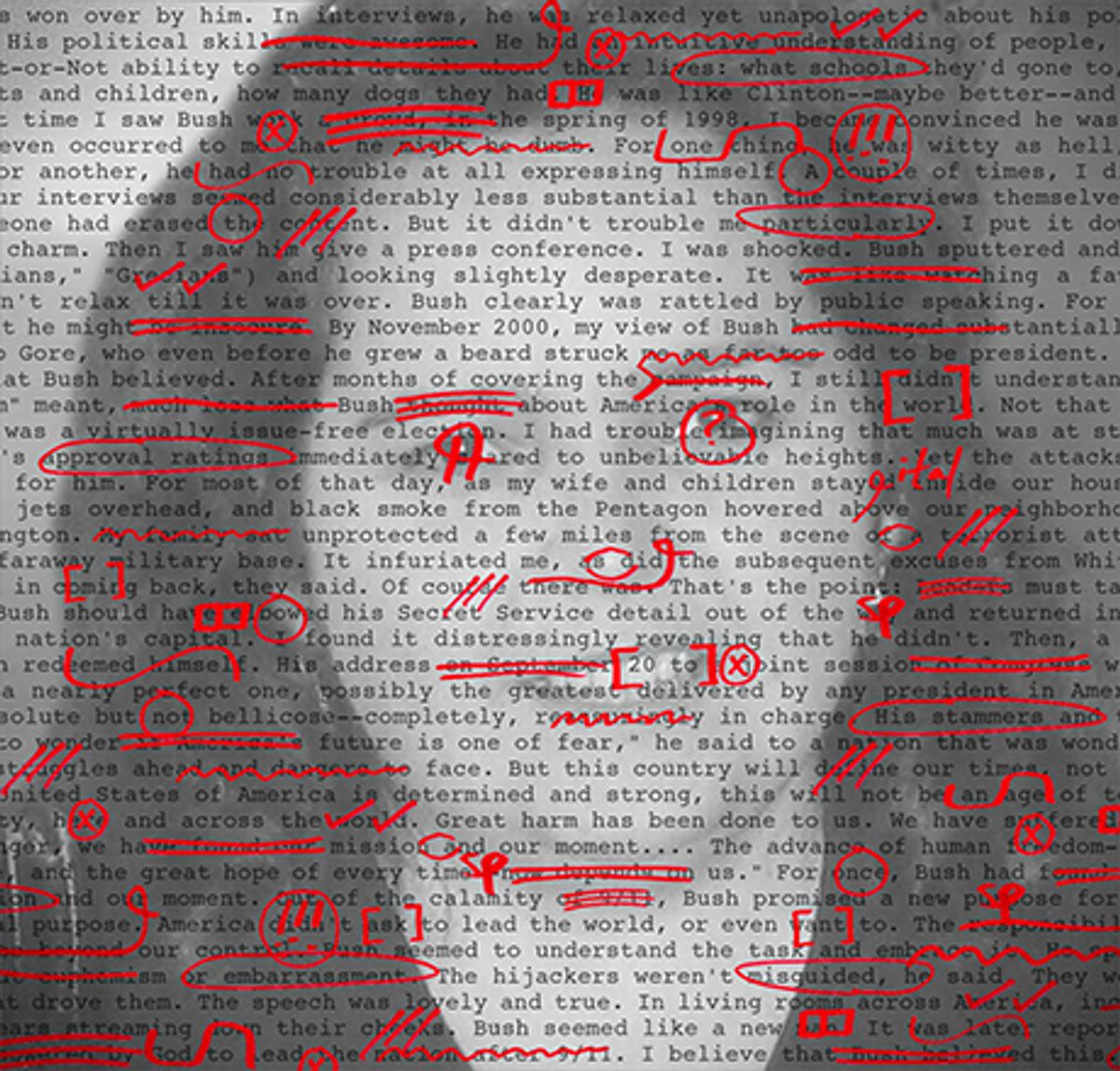 Kathryn Jean Lopez is, as best I can tell, a Heritage Foundation intern who was awarded the job of "National Review Online Editor" because no one at the magazine cared about the Web and she was the only person willing to update the site on the weekends. She was certainly not given the title due to her experience or, god help us, her talent.

I think this is maybe the ultimate Kathryn Jean Lopez Corner post. It's by no means the most stupid or wrong-headed or insane, just the one that best captures everything that makes her so depressing to contemplate:

SIGH [KJL ]
A very minor thing, but a trend: I heard a replay of Clay Aiken singing that Lee Greenwood song “God Bless the U.S.A.” at the Mall last night. The American Idol changed “I won’t forget the men who died” to “I won’t forget the ones who died.” Yes, women die in war, too. And not just in Iraq or Afghanistan. We know that. Do we really need Clay Aiken to spell it out? Would people really, seriously be offended if he sang “men”?
Posted at 12:23 PM

It is quite hard to take her seriously enough to actually criticize her as a thinker or writer or editor, which makes it all the weirder that anyone named her editor of anything. She doesn't inspire the hatred someone like Maggie Gallagher inspires, because with Maggie Gallagher you at least feel like you're dealing with an adult capable of rational thought. Lopez just seems damaged, and dumb. All of modern life plainly makes her miserable. She seems happy only at Mass, which she frequently live-tweets. Her Twitter feed, which used to be made up primarily of normal people things like baseball and the weather, is now often just an odd series of often slightly differentiated links to her articles, all of which have bizarre, obscure headlines, and all of which are about how degraded and horrible society is, besides the pope, who is swell. She was a happier soul, I guess, during the Bush years. She is worshipful of male Republican political leaders, and frequently writes about them in the creepy fashion of a girl with a crush on a father figure. And so she loved the president, very much, back when he was a good man who loved America (and was a white conservative man):

A totally crazy Saturday-morning thought: Wouldn't George W. Bush make an awesome high-school government teacher? Wouldn't it be something if his post-presidential life wound up being that kind of post-service service? How's that for a model? Who needs Harvard visiting chairs and high-end lectures? How about Crawford High? (Or wherever?) Reach out and touch the young before they are jaded, or break them of the cynicism pop culture and possibly their parents have passed down to them. Whatever you think of President Bush, he's a likable guy in love with his country with some history and experience to share.

She was similarly enamored with Rick Santorum, and, in 2008, at least, Mitt Romney, ("The looks. The hair. And then the family. He adores his wife as she does him. Who has it that good?") whom she learned to love when he unexpectedly came out against stem-cell research.

Lopez, a native New Yorker, went to the National Review in 2001 while she was still attending college at (of course) the Catholic University of America. She was editor of NRO by 2003, a heady time indeed for the right-wing blogosphere.

This is The Corner as it was: a bubbling brook of inanity punctuated occasionally by particularly vile or bizarre posts. Jonah Goldberg asking readers to write his column for him, then posting their responses. Ramesh Ponnuru carrying on reasonably intelligent dialogues with non-NR contributors. K-Lo posting one-sentence links to news articles and constantly hyping the godforsaken National Review Cruise. John Derbyshire popping in to be odd, at length. Lopez defending raving anti-Semite loon Mel Gibson against the charge that he is as bad as Michael Moore.

(To be fair, most political blogging used to be like this, back then. Ninety percent of the political blogosphere in Bush's first term was bored asshole lawyers posting pictures of their mountain bikes in between urgent calls for the immediate toppling of Saddam Hussein.)

It's sort of always been apparent that no one she worked with actually had any respect for her. Her joshing around with Jonah Goldberg, the Corner contributor closest to her emotional and intellectual level, was slightly sad.

(An example -- read from the bottom up.) When you actually asked K-Lo to act as editor, the results were less than impressive. (Though she was quite good at constantly begging for money.) An ex-Marine named W. Thomas Smith was contributing first-person reports from Lebanon to the National Review in 2008, until Thomas Edsall and various others pointed out that his reports were full of ridiculous, outright fabrications. Ridiculously over-the-top tales of thousands of Hezbollah militiamen taking control of much of Beirut -- the sort of stuff actual journalists in the area might have noticed. Lopez responded by saying that "NRO should have provided readers with more context and caveats in some posts from Lebanon this fall." She then followed that note with one in which she laid the blame for Smith's fabrication where it belonged: on some dumb lying Arabs.

As one of our sources put it: “The Arab tendency to lie and exaggerate about enemies is alive and well among pro-American Lebanese Christians as much as it is with the likes of Hamas.” While Smith vouches for his sources, we cannot independently verify what they told him. That’s why we’re revisiting the posts in question and warning readers to take them with a grain of salt.

Yes, we should have said to take these utter falsehoods with "a grain of salt. It very soon came out, of course, that Lopez had been told that Smith's reports were made up six weeks earlier, and had done nothing until she learned that the Huffington Post would be reporting on the matter.

Lopez was finally ousted as editor in 2009. She was replaced by the magazine's editor, Rich Lowry, in a move that doubtless saved a bit of money and also took care of the fact that the most public-facing portion of the legendary National Review was being edited by a loon.

But Lopez's niche has always been that she's the world's most tragic Catholic. She's basically a hack liberal's savage parody of a miserable, prematurely old religious conservative woman -- a Jean Teasdale of the right. It's not just her many, many writings on the evils of the pill and how contraception "[denies] the reality" that "motherhood is at the heart of what it means to be a woman." "I know enough to thank God for the job creators, the natural economic stimulators, capitalism," she said, when mean Mike Huckabee had the temerity to criticize the economy back when President Bush was America's dad.

Two more of my favorite Kathryn Jean Lopez posts: This one, in which K-Lo decides that Barack Obama calls terrorists "folks" because he loves terrorists, until presumably a reader points out that Bush also used the word "folks" all the time. And this one, in which she is happy that Google's logo is sufficiently patriotic but then some readers say maybe it isn't patriotic enough but then it is decided that it is.

Lately (especially since the Komen/Planned Parenthood firestorm) she's taken to rambling with no coherent point about how things she sees on TV make her mad, and sad, because abortion/the pill/sexual promiscuity are "immiserating" a generation of women, and then closes with material on Mary and Jesus.

And it is her dedicated defenses of Pope Joseph Ratzinger and the Catholic Church's handling of its child abuse epidemic that are, bar-none, the most despicable thing about Lopez, of course. When, in 2010, it was revealed that then-Cardinal Ratzinger had declined to defrock a priest who'd pleaded no contest to horrific abuse of children, Lopez wrote that the real scandal in the Catholic Church was that this one priest was a liberal who liked Barack Obama. Her columns on the wonderful compassion of the pope never actually mention any details on what the "abuses" were, though she does tend to blame them on the "laxity," which is to say, liberalism and the 1960s.

I leave you with this:

Libertas: What is your favorite movie?
Kathryn: It's probably Adam Sandler's "The Wedding Singer."