Taking care of my kids gave me purpose. As they head to school, I'm wondering what I want to be when I grow up 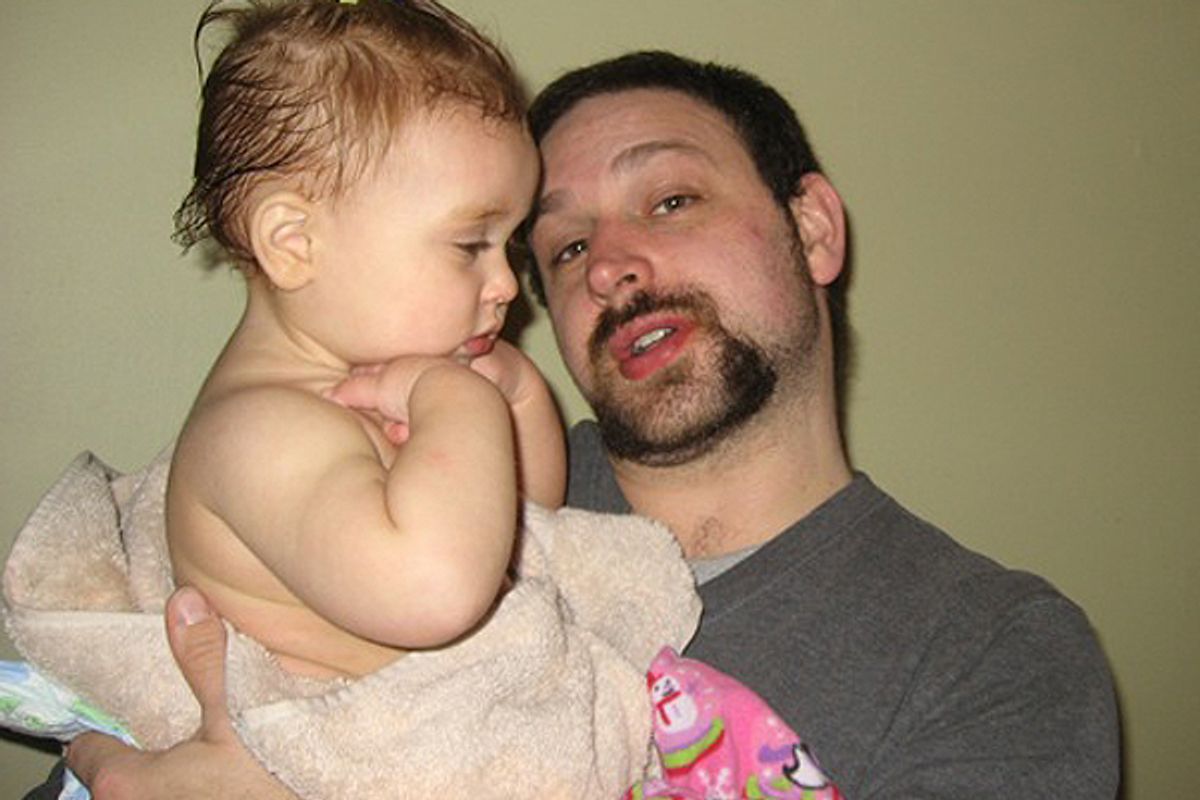 A photo of the author with his daughter.
--

The other morning my 3-year-old daughter and I had this exchange:

Me: “Do you want to have a special daddy-daughter morning together?”

"Suck" is a word her 6-year-old brother taught her. My daughter is not ungrateful or spoiled. She is simply honest, and proud of an expanding vocabulary. Daddy and daughter mornings do suck compared with sister and brother mornings. I could never hope to achieve the comic brilliance or physical daring of a 6-year-old boy; I refuse to use the term “soapy farts” for cheap laughs, and I won’t jump from the top of the third-floor stairs while screaming and firing foam disks from a Captain America shield. No, I’m merely the “authority blob” until her brother arrives home around lunch. For her, the equation is simple: 3+6=PARTY, while 3+34=SUCK.

This is such a shift from my son. When he was a little boy, I was pressed into service as his constant companion, caretaker and general superfriend. But my daughter is more self-sufficient. Next year, she goes to preschool while my little boy heads to kindergarten. I’m glad they’re growing up, but I’m staring down big chunks of empty space. After years as a stay-at-home dad, I may be looking for a new line of work.

In the years after the economy’s face melted and I found myself out of the workforce, I took comfort in the fact that staying home gave me full-time responsibilities. It wasn’t a “job,” but it was hard work. It made the sting of not earning easier. I was contributing, and at the very least, my contribution saved us money that would have gone to the increasingly expensive world of daycare. My time with the kid – and, later, kids – meant that we could live in urban Philadelphia on a single salary that qualified us for the “low-income family discount” at the YMCA.

More important, those five years of childcare turned me into something I never thought I’d be: a productive adult. I’ve gone from being a night owl who wakes up at noon to a person who can’t stay up past 10 p.m. and feels guilty on the rare days that I get to sleep until 8 a.m. I’ve worked harder than I ever worked earning a paycheck (which may be part of the reason I stopped earning a paycheck). Like many other families during this recession, my wife, Karel, and I learned not simply how to survive with less but how to thrive. We played our roles to the best of our abilities. Karel never had the luxury of engaging in the “mommy wars” because she was too busy making sure we didn’t lose our house. I didn’t have time to get mad about being emasculated and taken for granted in the workplace because I was too busy helping my kids master the trampoline at “Mommy & Me” gymnastics. And just to be clear, my kids do take me for granted, but it would be useless to send them angry, drunken emails about it, because I won’t let them play with my computer.

While I recognize that my wife and I had it a lot easier than many people out there (we had a supportive extended family and awesome health benefits supplied by Karel’s job), it was still frightening to live on one income, with so little security. But it made my family stronger and better, and it made me stronger and better, too.

But at the end of this summer, my kids head off to school. For the first time since I stopped working, I won’t have the official responsibilities that kept me from feeling weird about being a man who doesn’t have a steady job. I won’t be on the move or constantly managing dependent little chunks of redheaded neediness. My daughter’s independent streak offers a troubling preview of what that time will look like. While these newfound “negative spaces” should be glorious releases, inspiring moments of freedom returned, instead I find the lack of purpose has left me unfocused and fuzzy-headed, bored. I’m questioning my role and importance in the family. It’s like watching your hours at work get cut before an inevitable downsizing.

I don’t know what I’m going to do with myself. I know I should take the work ethic learned in the trenches of infant and toddler care and get back into the workforce. But I’m concerned, because while carrying heavy, tired children multiple blocks and making “cream cheese roll-ups” has been wonderful for my personal growth, all I have to show on paper is a five-year gap in my employment history. What’s even more disconcerting is that nothing has really changed in terms of the job market. I’m not any more desirable to the six employers who are hiring right now because I learned how to wipe butts and “found myself.”

I am very lucky to have a regular columnist gig with a print magazine. But thinking there is a financial future in writing is like believing not only that the Easter Bunny exists, but also that he will give you a hand job if you catch him. I am exactly like every other dad I know from the park: My first responsibility is my kids, and in my spare time I putter. For me, it’s writing, while other guys earn extra cash as wedding photographers or freelance graphic designers for small businesses, or pull a few overnights at Trader Joe’s, or work a security gig on the weekends, or teach a class here and there. Every stay-at-home dad I know cobbles part-time work together using the skill sets learned in a former life. The problem is, as our full-time parenting work downshifts to part-time, the part-time paying gigs remain firmly in place.

So what comes next? I know many stay-at-home moms of school-age kids who bust their asses being chauffeurs, cooks, advocates for their children’s schools (a difficult and time-consuming job, especially in Philadelphia) and a million other things that keep them on their toes while their children are learning. Is that what the future has in store for me and my kind? Is that even responsible in a post-crash America?

As I’ve noted before, it’s amazing how fast our culture adjusted to fathers staying at home with young kids. But just as TV and movies and everyone in the neighborhood have gotten comfortable with that idea, the world has already turned for men like me. While you never stop being a dad, the heavy lifting of infant and toddler care – of stroller-pushing and diaper changing – is over. People understand the importance of raising a kid, whoever does it. But will we be OK when we’re confronted with a generation of men in between, of PTA and soccer dads? Will we still be cool with the Avon dude? Will I be cool becoming one?