"The Newsroom": Cliched as hell

"The Newsroom," like so many shows and movies about the press, romanticizes a Golden Media Age that never existed 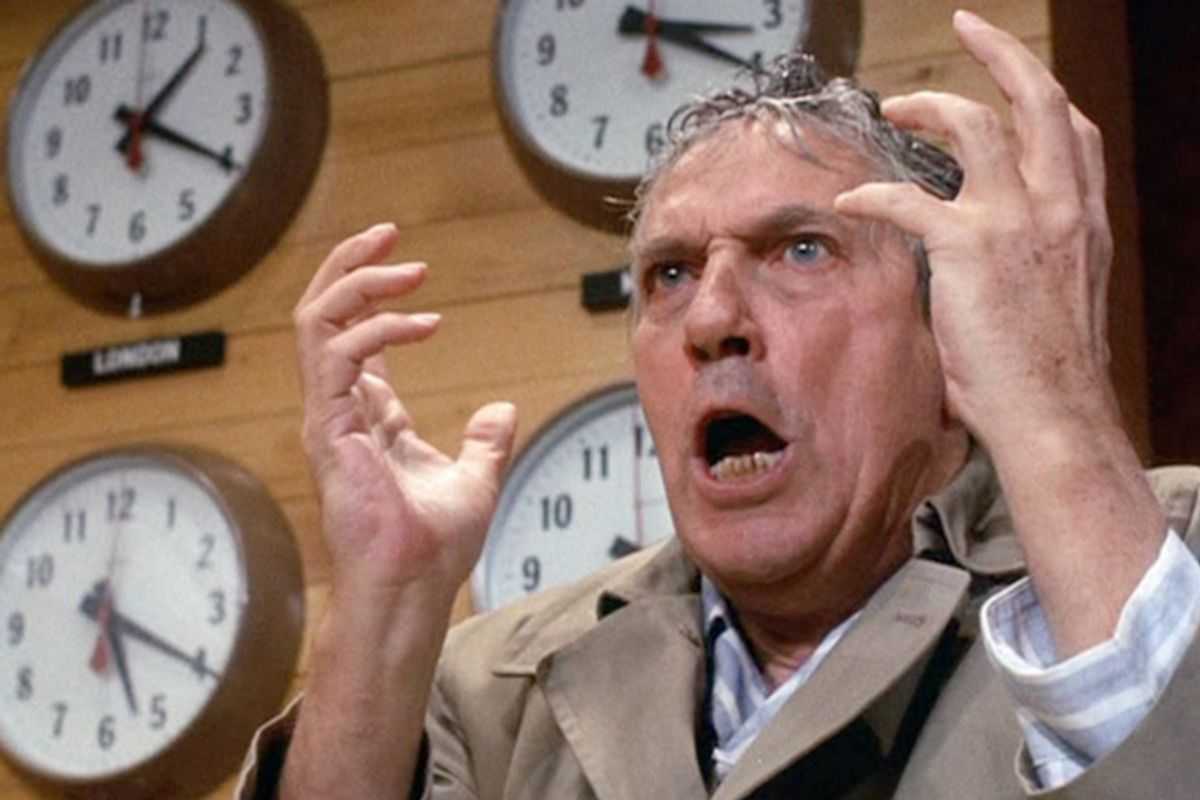 This Sunday, Aaron Sorkin's new show, "The Newsroom," will premiere on HBO, allowing the Oscar-winning screenwriter to hold forth on the state of American journalism. Surprise: He wishes it were more like the '60s! The main character, a cable news anchor named Will McAvoy (played by Jeff Daniels), starts off the series as a talking head, but following a Brave Moment of Clarity when he Truly Speaks His Mind, becomes a populist firebrand -- you know, like those actual people already on TV, but minus the drama of unscripted television. It's about as exciting as Mary Sue-centric political fan fiction, but that's not really the point; you can find those already on TV too. The point is that "The Newsroom," like "Broadcast News," or the fifth season of "The Wire," all lament the press's inability to act more like it did between the end of the Vietnam War and Nixon's post-Watergate resignation. Why, in diagnosing the obvious problems with the press, do we keep returning to this one six-year period some four decades in the past? Why do we think this small sliver of history holds the key to a media and political environment vastly different than it was in the late '60s? And how do the stories we tell about the press in movies and TV shows reinforce this imagined Golden Age as our only hope for properly liberal political journalism?

Every hero story about journalism tends to follow the same pattern, and "The Newsroom" hits its marks dutifully. At first, the hero is a successful but soulless newsman -- it's always a man, just like it was in the '60s -- but one day, overwhelmed by the undeniable falsehood of his work, he snaps and tells an enormous truth, one that always seems to favor the left. He then fights a battle on two fronts, simultaneously struggling against his organization (which wants him to toe the middle-of-the-road corporate line) and his subjects (who want him to play the political game). The message these stories send is that the press knows The Truth About Everything but, in collusion with the business-controlled political system, is deliberately keeping it hidden in order to protect its corporate interests. Only the heroic newsman can overcome these obstacles, alone -- Sorkin says the show is about the anchor's "quixotic journey" to make a "utopian newscast" on the sheer force of his "guts."

These stories are inspired by certain actual events: Edward R. Morrow's reporting on Joseph McCarthy and Walter Cronkite coming out against the Vietnam War both get mentioned on "The Newsroom," and Woodward and Bernstein breaking the Watergate scandal lurks in the background as well. These were undeniably great journalistic moments, but we've turned these admirable responses to particular situations into the model for all journalistic responses to all situations. What's more, our perceptions of them are filtered through retellings. We're not idolizing Murrow's actual broadcasts so much as the George Clooney film about him. We're not looking to emulate Bob Woodward's actual company-man career, in which Watergate seems much more of an anomaly than a guiding light; we're asking the press to follow the script of "All the President's Men." On his last broadcast of "Countdown," a program he ended each night by harrumphing the actual title of Clooney's movie, Keith Olbermann closed with a quote from "Network," a fictional movie about a fictional television network. The desired end-goal is not to sort out the complicated, contradictory demands we put on the press -- to inform, to be fair, to call out untruth, to challenge political wrongdoing, to tell us the right things to pay attention to, to continue existing -- but to empower a kind of aestheticized journalistic ideal where passionate self-expression is equated with truth and its denial equated with censorship. The press's raison d'être, in the view of "The Newsroom," appears to be making Aaron Sorkin feel good about himself.

In trying to tell us something about reality, these stories all falter in creating a fictional world convivial to their message -- but hopelessly limited relative to the media landscape we face today, which is far more varied than the one Murrow and Cronkite inhabited. When there were only three networks all showing national news broadcasts in the same time slot every single night, the audience for those particular programs was massive, and the actions of a single person could make a real difference -- "guts" could matter. Today, though, the audience has splintered, due not to the press's failure, but simply to the abundance of choices, as Markus Prior has shown. That drop in audience has had real consequences for the news business and journalists' ability to cover politics, but it won't be reversed by programming changes. A lone maverick can't make much of a difference.

But really, if all Sorkin wants is a press with more people expressing the truth as they see it, we hardly lack opportunities for journalists to express their opinions. A running theme in these stories is that of the Big Bad Organization preventing journalists from achieving their true selves, but we have a word for people who write about politics without anyone telling them how to do it: bloggers. Cable news, too, provides endless opportunities for such supposed truth-telling. Sorkin seems to object to the endurance of certain journalistic standards -- "What I do see is a bias toward fairness, a bias toward neutrality, a bias toward false equivalency," he says -- but misses the point that, as problematic as objectivity is, a press without any neutrality would be just as bad as a press that's always even-handed. Murrow's and Cronkite's truth-telling wouldn't have been so notable if it hadn't been so rare. "Walter Cronkite decries Vietnam War for 354th time" is not a notable historical moment. The press is far from perfect, but an inability for journalists to properly express themselves is hardly an issue in a media environment encompassing everything from nightly news to personal blogs.

So why do these stories keep getting told if they're so outdated? Well, for one thing, they make good stories. It's hard to properly represent systemic issues, but what we see in "The Newsroom" is classic hero's journey sort of stuff, "Star Wars" with a teleprompter. It's easy to grasp morally direct stories about a single individual. And certainly it's a slippery slope when we start to criticize scripted shows for being insufficiently realistic. But these journalistic myths seem to matter, as Olbermann's evocation of "Network" attests. Sorkin is up-front that he's trying to make a point here, and it mirrors the point a lot of people make in their laments about the press. But, unlike McAvoy's newscast, Sorkin's show is a real anomaly, one of the few current fictional representations of journalism. It's a proposal for "utopian" news broadcasts with a platform far bigger than any nonfiction fist-shaker. Which is why it's such a shame that he mucks it up so badly. Instead of thinking inventively about where the press is and what could reasonably be done about it, he instead gives us a tired retread of a story we've seen a thousand times before. If Sorkin really wanted to fix the press, he should hope for something better than a Golden Age long past.