For just $1 a day, you can help a Syrian rebel oust President Bashar al-Assad 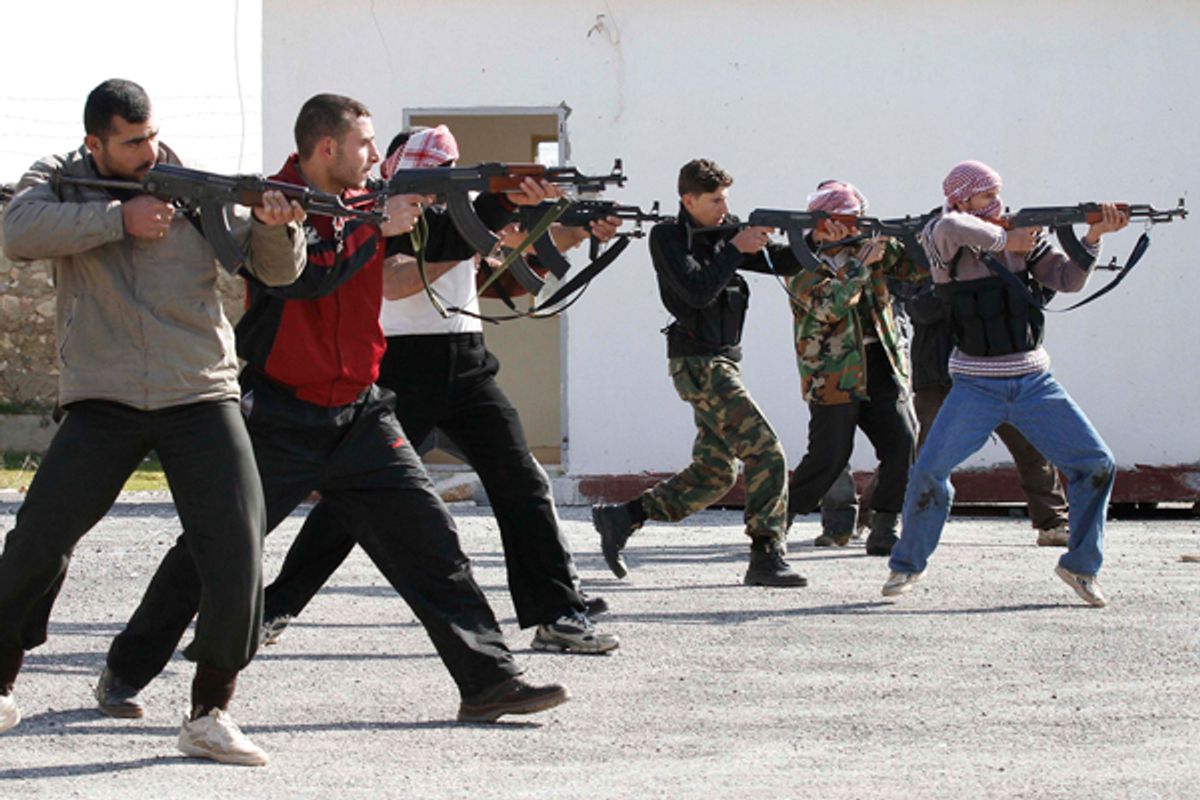 The 24-year-old has been shot at, wounded, hunted down, imprisoned and tortured. He has spent many months camping in the Syrian mountains “Che Guevara style.”

But Assi is not a rebel fighter. He is a Syrian journalist — with a political agenda.
“I make my jihad by words, not by violence,” he said.

His mission is not just to tell the world about the plight of Syria's rebel forces, but also to raise money, which the rebels use to buy more of whatever they might need. Assi works for one of several dozen websites that have popped up in the last year to raise cash for activists and rebels working inside Syria to topple President Bashar al-Assad.

“We raise money for weapons, but armed conflict is not the objective — it is a necessity at this time,” explained Assi, who works with a team of volunteers on the shamfalcons.com website. “The real value of my work will be after the revolution. Information is more powerful than a bullet.”

But at $4 a bullet, the going rate inside Syria these days, it will take a lot of fundraising to power a revolution.

Assi's website posts news about the eight rebel battalions of Jabal al-Zawiya, known collectively as the Sham Falcons. Videos, photos and reports in English, French and Arabic inform readers of checkpoint attacks, the seizure of armed vehicles and weapons, and the death of fallen comrades.

Such stories are always followed with a plea to “donors, military experts and weapons merchants.”

"O you who have believed, shall I guide you to a transaction that will save you from a painful punishment? [It is that] you believe in Allah and His Messenger and strive in the cause of Allah with your wealth and your lives.”

Abu Hajar, the website’s developer, said he now receives regular donations from within Syria and from a network of people abroad. Hajar said everything is organized via Skype, which is encrypted, making it the "safest common form of long-distance communication in Syria." The website is hosted outside of the country and material is uploaded via satellite connections using a virtual private network.

Hajar has worked on the site since the revolution began, first in Brussels where he had been working at the time, and now in Jabal al-Zawiya, Syria. The system he helped create has now spread across the globe. Dozens of trusted coordinators collect donations and arrange for money and goods to be smuggled into Syria.

“There are a lot of foreigners that want to come here to help us with our fight, but if they did they would be accused of being terrorists,” Hajar said. “So instead they send us money.”
Many more websites like his are springing up to support Syrian rebel groups desperate for funding for everything from medicine and satellite internet devices to guns and missile launchers.

Another website, Adopt a Revolution, is run by activists operating in Germany and Syria. It seems more like an international children’s aid group than a rebel fundraising organization. All it is missing is a pitch from Sally Struthers as the site pleads for regular sponsors of the “Syrian Spring.”

“One activist in hiding needs monthly about 100 euro for daily expenses,” the website reads.
The page goes on to describe the various committees in Syrian towns in need of financial support. There are 31 in all, and Adopt a Revolution says they now raise about 1,000 euros per month for each of these committees with the help of 1,400 regular sponsors.

Elias Perabo, one of the websites founders, said the funds raised on their site are not used for weapons, but are instead focused on providing activists with the means of conveying what is taking place inside Syria. For this they need equipment, internet connections and safe houses.

“We have three aims,” Perabo told GlobalPost in a Skype interview, “to bring support to the local communities in Syria, to bring activists abroad closer to Syrian issues and to build an emotional link so people here in Germany can connect with a Syrian community to understand the issues they are facing.”

Perabo said their donors, who receive regular updates regarding their “adopted” Syrians, range from corporations to retired couples and students. Perabo got involved when on holiday in Syria last April. He found himself unwittingly in the middle of an uprising. The idea for the website, which launched last Christmas, came from there.

Earlier this month, it seemed that relief from the constant fundraising  struggle had arrived when Syrian businessmen abroad met in Qatar and announced their pledge of $300 million toward the revolution. But the pledge was met by skepticism.

“It’s hard to see where money like this goes. But we hope more money is getting through,” Perabo said.

Hajar and the team at shamfalcons.com said such money would only go to the "so called” Free Syrian Army leaders living abroad.

“Most of the revolutionaries in Syria refuse to place themselves under the banner of the Free Syrian Army for several reasons, and then receive no help from them,” Hajar said.

As for the Sham Falcons, with an average price of $1,000 for a Kalashnikov rifle and $4 per bullet, the plea for funding is never ending.

“Money is the heart of war,” Hajar said with a sigh. “Without it, we can not accomplish anything.”