The Consumer Financial Protection Bureau proves government can work. So of course Republicans want to kill it 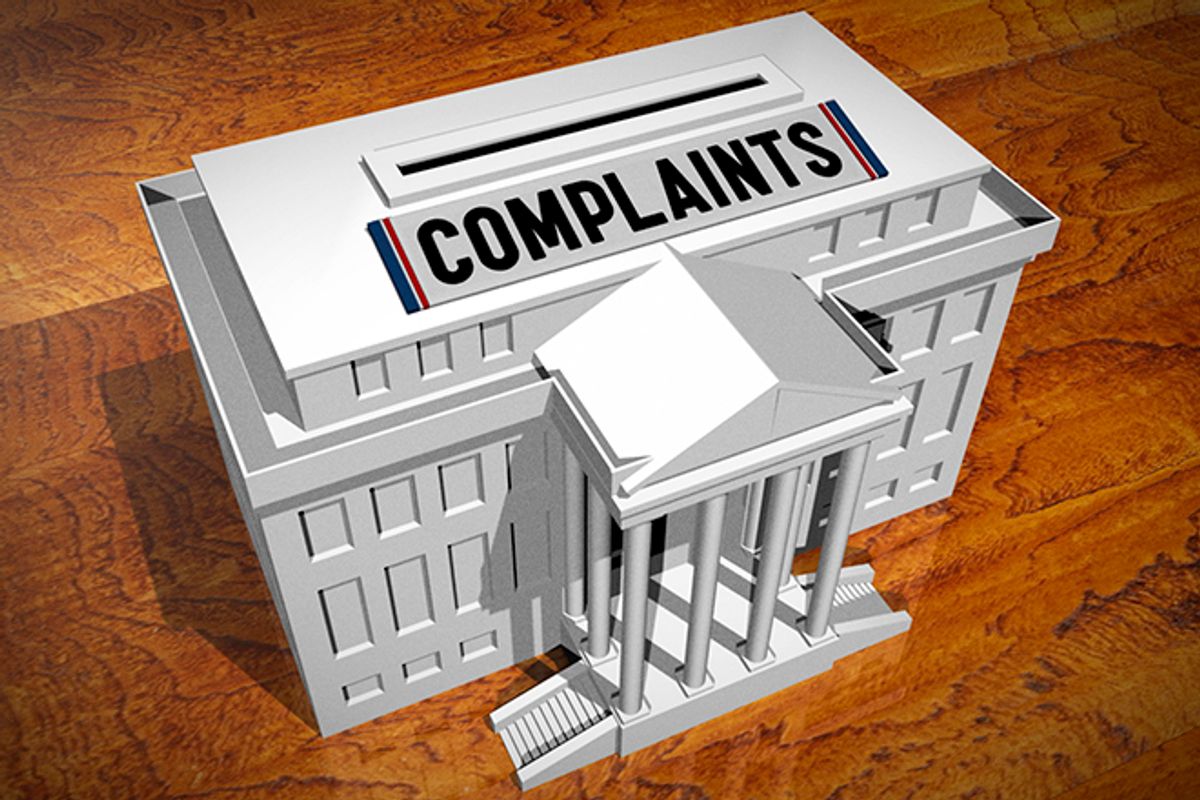 When the Consumer Financial Protection Bureau made public its "consumer complaint" database on Tuesday, the agency included six "snapshots" of Americans it had directly helped resolve their issues. One lucky man: "Ronald" -- a 77-year-old Army veteran who "believed he had paid off his mortgage but found his mortgage servicer said he still owed money."

After the CFPB got involved at the end of 2011, the bank determined that Ronald had in fact paid off his mortgage in 2007 before the current servicer took over the loan. The bank refunded Ronald’s money at 3 percent interest and sent him a check for $30,000.

Big government is usually castigated as a source of red tape, bureaucratic confusion and tax collector intrusion. But how about a federal agency that gets you refunds from banks, straightens out credit card billing disputes and protects you from dodgy mortgage lenders? That's government you can use.

President Obama can be justly accused of being too willing to compromise on many fronts, but his administration fought hard to bring the CFPB to life, making clear throughout the drawn-out battle over the final shape of the Dodd-Frank bank reform act that the CFPB was a top priority. Although it's still very early to make a substantive judgment -- the agency has only been up and running for 11 months, and has had an official director only since January -- a review of the record so far goes a long way toward explaining why the White House made its push. Consumer finance is bewildering, and the average American is not wrong to think that banks and lenders don't make serving borrower interests their top priority. Judging by the comments the bureau has already gathered from citizens on student loans and credit cards, the new agency has hit a nerve. Battered by the recession, unscrupulous lenders and incomprehensible financial documents, Americans appreciate having someone in their corner. The CFPB as a kind of supercharged consumer hotline might be exactly what we're willing to see our tax dollars pay for.

In an interview with Salon, CFPB director Richard Cordray gave his agency an upbeat assessment: "As a brand-new agency starting out from ground zero I think we're doing well, but I always feel impatient and urgent about us moving forward as fast we can."

Politically speaking, the CFPB is extraordinarily vulnerable, perhaps more so than any other part of the government regulatory apparatus. Cordray, a former Ohio state attorney general, is a recess appointment. In May 2011, 44 Republican senators signed a letter promising to filibuster any permanent nominee unless changes were made that would substantially undermine CFPB's effectiveness. Republicans have also made no attempt to hide their desire to cripple CFPB's funding and Mitt Romney is running for president with an explicit promise to repeal Dodd-Frank. All of which creates a conundrum. The more Americans know about what the CFPB does, the more likely they are to approve of it. And by January, promises Cordray, the CFPB will have gotten past its early growing pains and be ready to take significant action on a number of fronts.

But depending on the outcome of November's election, by January the CFPB may already be an afterthought, doomed to irrelevance by a GOP more interested in dismantling the government than in making it work for the average American.

Five years ago, Elizabeth Warren, the Harvard law professor currently running for senator in Massachusetts, envisioned what became the CFPB as an equivalent to the Consumer Product Safety Commission, which makes sure your toaster won't blow up in your face: "a new regulatory body, to protect consumers who use credit cards, home mortgages, car loans and a host of other [financial] products."

A review of CFPB's accomplishments and initiatives to date suggest that the agency is moving in exactly the direction that Warren hoped. Among the areas in which the CFPB is formulating rules or gathering information are student loans, credit card agreements, overdraft penalties, prepaid cards, payday lenders and elder financial abuse. The agency is also positioning itself as a kind of one-stop shop for consumers who want to be more informed about financial products: For example, there's Ask CFPB, a database of questions and answers on common consumer finance questions. And in April the agency debuted a beta version of a Financial Aid Comparison Shopper aimed directly at college students.

The bureau is involved in multiple aspects of the mortgage loan industry, from simplifying the language of mortgage closing documents to cracking down on abuses by mortgage servicers and ensuring that mortgage lenders can prove that borrowers are actually able to pay back the loans they take on.

"We have been required to put in place a number of rules to fix the problems in the mortgage program," says Cordray. "It is the single biggest consumer credit market out there. There is no question in anybody's mind at this point that the mortgage market meltdown is one of the major causes of the financial crisis and the crash of the economy and millions of people losing their jobs and their homes."

The CFPB will be heavily involved in supervising both regular banks and non-bank lenders, but the aspect of the bureau's operations that is likely to be most noticed by consumers, and is already very much in effect, is its Consumer Response Center. So far, the Response Center takes complaints on credit cards, student loans, mortgages and bank accounts. CFPB staff -- currently totaling 900 -- then follow up on the complaints with the appropriate parties. To date, reports the CFPB, the agency has received around 45,630 consumer complaints, "including approximately 16,840 credit card complaints, 19,250 mortgage complaints, 6,490 bank products and services complaints, and 1,270 private student loan complaints." On credit cards alone, CFPB reports that issuers responded to 94 percent of the complaints, and for the 2,000 cases in which the issuers resolved the complaint in the borrower's favor, the median amount of monetary relief "was approximately $130." Cordray said there are many investigations under way in which consumers have contested the response from banks, but no enforcement measures will be made public until action is taken.

Of course, most Americans probably still don't even know that they can bring a complaint about their mortgage or credit card bill to the government. Which raises an obvious question: Can one government agency scale up to meet the financial gripes of 300 million Americans?

"It has always been an issue in my mind," said Cordray. "Where will the complaint level level off? Will be it a couple of hundred thousand a year? Will it be a million a year? Will it be at 10 million a year? We honestly don't know. It's a brave new world, and other banking agency experience is not really transferrable, because they weren't as consumer-facing as we are; it's a very different thing. And they didn't have authority over the nonbank world, as we do. So we are trying to be intelligent about what we are doing, and being able to replicate it on a broader scale. But as we become better and better known, and more and more people come to us and they start to see the value of coming to us, we need to continue to be able to manage that. It's a challenge, but it's a good challenge. It is what I've heard people describe as a high-class problem. If more consumers are seeking more help, the challenge of us being able to help them is a high-class problem."

There are limits to what CFPB can achieve, however. On the hot topic of private student loans, for example, Cordray noted that "We don't have the authority to rewrite their contracts."

"What we can do is two things," said Cordray. "By putting out information as we are doing, that creates a form of advocacy, a form of visibility around the problem. And also we learn from what they tell us, so that we can help other people avoid getting into the same problems and predicaments in the future. That's very important, I wish that we could go back and undo what many people tell us they now regret about choices that they made five or 10 years ago that really affected the trajectory of their lives. But what we can do is try to prevent others from going down the same path themselves."

As for resistance from Republicans, Cordray contends that legislators will start to see what CFPB is doing for the voters who previously came directly to them with their complaints:  "I think all the people in Congress, whether they originally voted for Dodd-Frank or did not vote for Dodd-Frank, as they see us delivering value for their constituents, the very same people that are coming to them, often with the same kind of problems they come to us with, I think that really builds a powerful momentum over time, and that is already beginning to happen. I have great faith that the work we are doing over time justifies itself, and I think that is beginning to happen. We haven't been here all that long, but I think it is beginning to happen."