The Fed debated domestic policy this week, but its actions in Europe are just as revealing 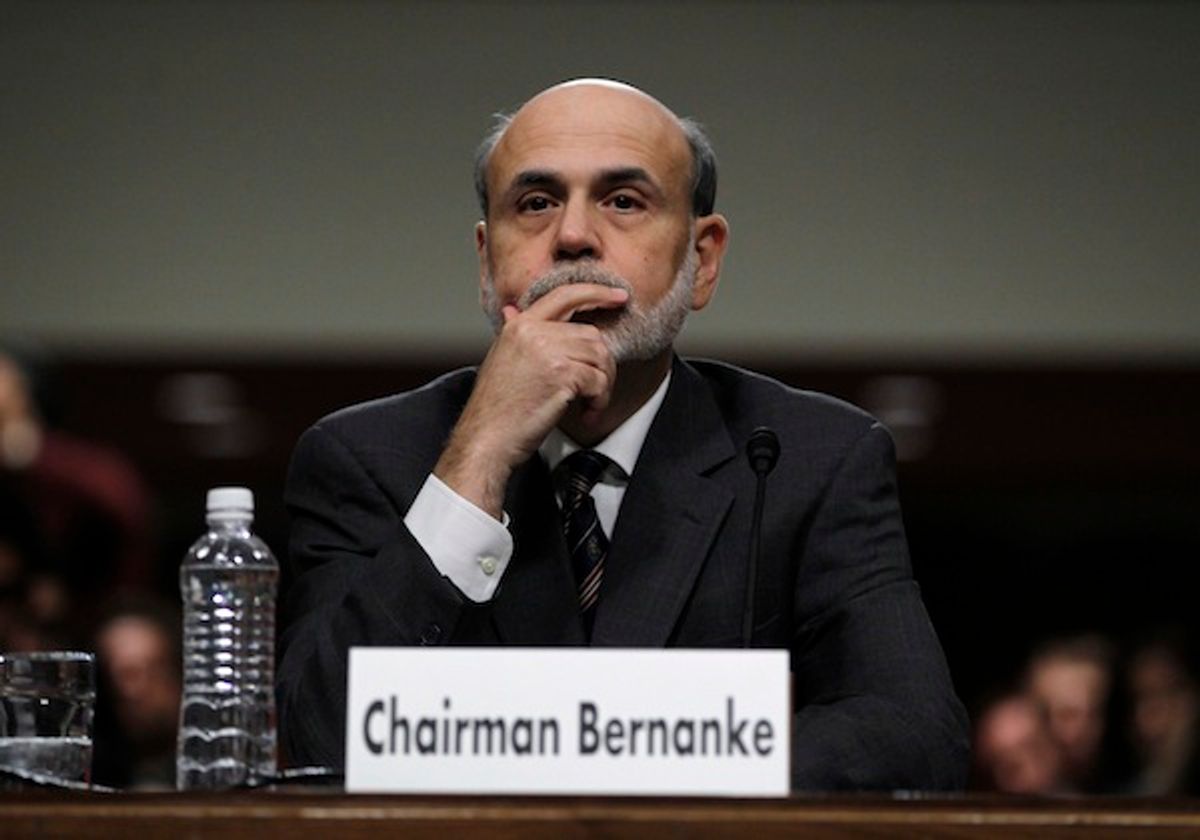 Warning that America’s sputtering economic recovery was grinding down, this week the Federal Reserve noted in classic Fed-speak that “strains in global financial markets continue to pose significant downside risks to the economic outlook.” But the Fed and its soft-spoken chairman Ben Bernanke announced nothing new to fix those strains. And they said even less about the steps they were already taking to prop up the staggering banks in Europe.

Bernanke’s silence speaks loudly of the strange and controversial role that America’s central bank now plays in global finance. The Federal Reserve’s charter gives it two basic legal mandates. One is to promote price stability, which means to combat both inflation and deflation, as central banks all over the world try to do. The other, to the surprise of many, is to promote full employment, which the Fed has literally never accomplished. Nothing in its charter explicitly empowers the Fed to act as central banker to the world, or anything close. But, in contrast to his predecessors as Fed chairman, Bernanke has increasingly talked up the full-employment mandate to justify increasing global intervention.

“The crisis in Europe has affected the U.S. economy by acting as a drag on our exports, weighing on business and consumer confidence, and pressuring U.S. financial markets and institutions,” he testified to Congress earlier this month. “As always, the Federal Reserve remains prepared to take action as needed to protect the U.S. financial system and economy in the event that financial stresses escalate.”

The needed action has already started, as Gerald P. O’Driscoll Jr., a former vice-president of the Federal Reserve Bank of Dallas, explained last December in the Wall Street Journal. He called his whistle-blowing exposé “The Federal Reserve’s Covert Bailout of Europe.”

Now at the libertarian Cato Institute, O’Driscoll revealed – and Bernanke later confirmed – that the Fed has entered into agreements with the European Central Bank to provide billions of dollars, which the ECB then lends to ailing banks in Europe to increase their liquidity. The Fed also agreed to similar deals with the central banks of England, Switzerland, Japan and Canada. Technically, the dollars are not loans. They are instead “currency swaps.” In return for the dollars, the ECB and other central banks give the Fed equivalent amounts of their own currency, along with an agreement to return the dollars at the same exchange rate.

The Fed has offered swaps on and off since 1962, and it first launched the current set of programs in late 2007 in response to global repercussions of America’s subprime mortgage crisis. The new agreements signed just after last Thanksgiving lowered the charge from 1 percent to one-half of 1 percent.

The swaps differ from the $1.2 trillion in direct loans that the Fed made to American and foreign banks following the bankruptcy of Lehman Brothers in 2008. As documented by the non-partisan Government Accountability Office, these direct loans dwarfed the $700 billion Troubled Asset Relief Program (TARP) and greatly embarrassed the Fed, which fought to keep the information from becoming public. The swaps keep the dollars from showing up on the Federal Reserve’s balance sheet and let the foreign central banks pick the recipients and make the loans.

The sums at risk are not chopped liver. As Bloomberg BusinessWeek reported, “Lending through the swap lines peaked at $586 billion in December 2008.” Current totals are much lower, amounting last week to $24.215 billion. But, given the stakes of a widely predicted Lehman-sized crisis, the Fed has to be prepared to go at least as far as it did before.

O’Driscoll calls the currency swaps “Byzantine, anti-democratic, non-transparent and fully intended to confuse observers.” Though I’m far from sharing his well-known faith in the mythic free market and see a real American interest in helping Europe avoid disaster, I have to admit that he makes a point. The swaps recall Enron’s off-balance-sheet accounting and Goldman Sachs’s use of credit default swaps to help Greece mask its debt to meet the fiscal requirements to enter the Eurozone. Nor is Bernanke playing straight with either Congress or the public. Last December, he assured Republican Senator Lindsey Graham and others that the Fed did not have “the intention or the authority” to bail out European countries or banks. Three months later, he told Congress that the dollar swap lines “seem to have been successful” in helping Europe avoid a “major financial accident.” He can’t have it both ways.

The Europeans are no straighter. As O’Driscoll explained, the European Central Bank also wanted “a fig leaf” to hide what it is doing. The swaps allow the ECB to lend dollars to ailing banks without being seen as bailing them out, which its charter forbids it to do.

But the problems go far deeper. European leaders currently face a head-spinning array of overlapping crises. They want to save the Euro, make Europe more competitive, reduce sovereign debts, recapitalize failing banks and rebuild inter-bank lending, which has fallen lower than anyone expected. Less well understood, the European leaders also need to find a way to recycle surpluses from wealthy exporters like Germany so that the poorer countries can continue to buy its products. That’s a macroeconomic lesson from John Maynard Keynes that Angela Merkel has yet to acknowledge.

If the economics seem complicated, the politics are worse. So far, the leaders here in Europe have failed to build sufficient popular support for their European project, and the solutions they are currently discussing all would give their people far less democratic control over the decisions that affect their lives. In fact, power would increasingly go to the financial giants on Wall Street and their allies in London, Frankfurt and Zurich. These are roughly the same folks who dominate the supposedly independent Federal Reserve, and Ben Bernanke’s inscrutable currency swaps will only feather their nest.