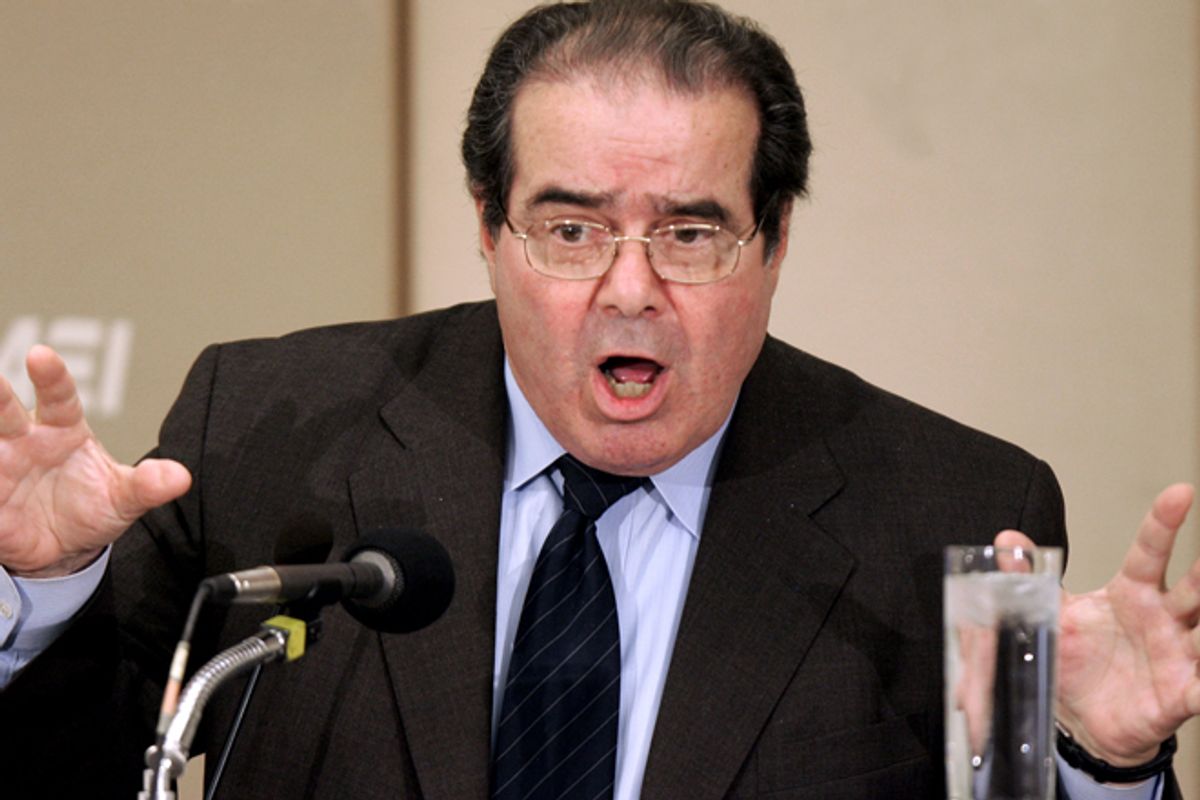 Newt Gingrich has been described as a dumb person’s idea of a smart person. I’ve heard the same remark made about Antonin Scalia, and until today I would have said that was unfair. Scalia has always had a taste for over-the-top rhetorical flourishes, as well as an unnecessarily high opinion of his own intellect, but these weaknesses had to be balanced against ... oh never mind, I can’t do this any longer.

Scalia, who 25 years ago had a certain gift for pointing out the blindness and hypocrisy of certain versions of limousine liberalism, has in his old age become an increasingly intolerant and intolerable blowhard: a pompous celebrant of his own virtue and rectitude, a purveyor of intemperate jeremiads against the degeneracy of the age, and now an author of hysterical diatribes against foreign invaders, who threaten all that is holy.

Here’s a passage from his dissent today from the Supreme Court’s decision forbidding the state of Arizona from deciding to “help” the federal government to enforce federal immigration laws that the national government has decided it would be better to under-enforce:

As is often the case, discussion of the dry legalities that are the proper object of our attention suppresses the very human realities that gave rise to the suit. Arizona bears the brunt of the country’s illegal immigration problem. Its citizens feel themselves under siege by large numbers of illegal immigrants who invade their property, strain their social services, and even place their lives in jeopardy. Federal officials have been unable to remedy the problem, and indeed have recently shown that they are unwilling to do so. Thousands of Arizona’s estimated 400,000 illegal immigrants — including not just children but men and women under 30 — are now assured immunity from enforcement, and will be able to compete openly with Arizona citizens for employment.

This quote is in the middle of a longer passage, railing against the Obama administration’s immigration law policy – a passage written by a man who obviously no longer cares that he sounds increasingly like a right-wing talk radio host rather than a justice of the Supreme Court, and that his dissents are starting to read more like hastily drafted blog posts than sober judicial opinions.

Like many a graying eminence, Scalia is becoming a caricature of his younger self. This is a serious problem, given that the Supreme Court continues to devolve into an institution dominated by cranky senior citizens, who are harder to get rid of than the longest-serving members of the old Soviet politburo. Indeed, Scalia seems headed down the path previously trod by those justices who clearly didn’t know when to hang up their robes. His career is beginning to resemble that of William O. Douglas, another justice who allowed a combination of immense arrogance and creeping decrepitude to transform him from a formidable figure into a ranting old man, whose performance on the bench became so embarrassing and disturbing that it is said the other justices made an informal agreement not to allow any decision to turn on Douglas’ vote.

Although we don’t share the same political or legal views, I take no pleasure in watching Scalia’s decline.  He is (or was) a man of real talent, and, after all, his fate is one that awaits all of us in one form or another. Scalia is said to enjoy both baseball and fine literature (his father was a distinguished professor of Romance languages). Perhaps absurdly, I wish he would read, or reread, the conclusion of John Updike’s magnificent essay on the home run Ted Williams hit in what turned out to be the last at-bat of his career:

Williams' last word had been so exquisitely chosen, such a perfect fusion of expectation, intention, and execution, that already it felt a little unreal in my head, and I wanted to get out before the castle collapsed. ...  On the car radio as I drove home I heard that Williams had decided not to accompany the team to New York. So he knew how to do even that, the hardest thing. Quit.