The group trying to kill Obamacare

The National Federation of Independent Business, the lead plaintiff in the ACA suit, contributes heavily to the GOP 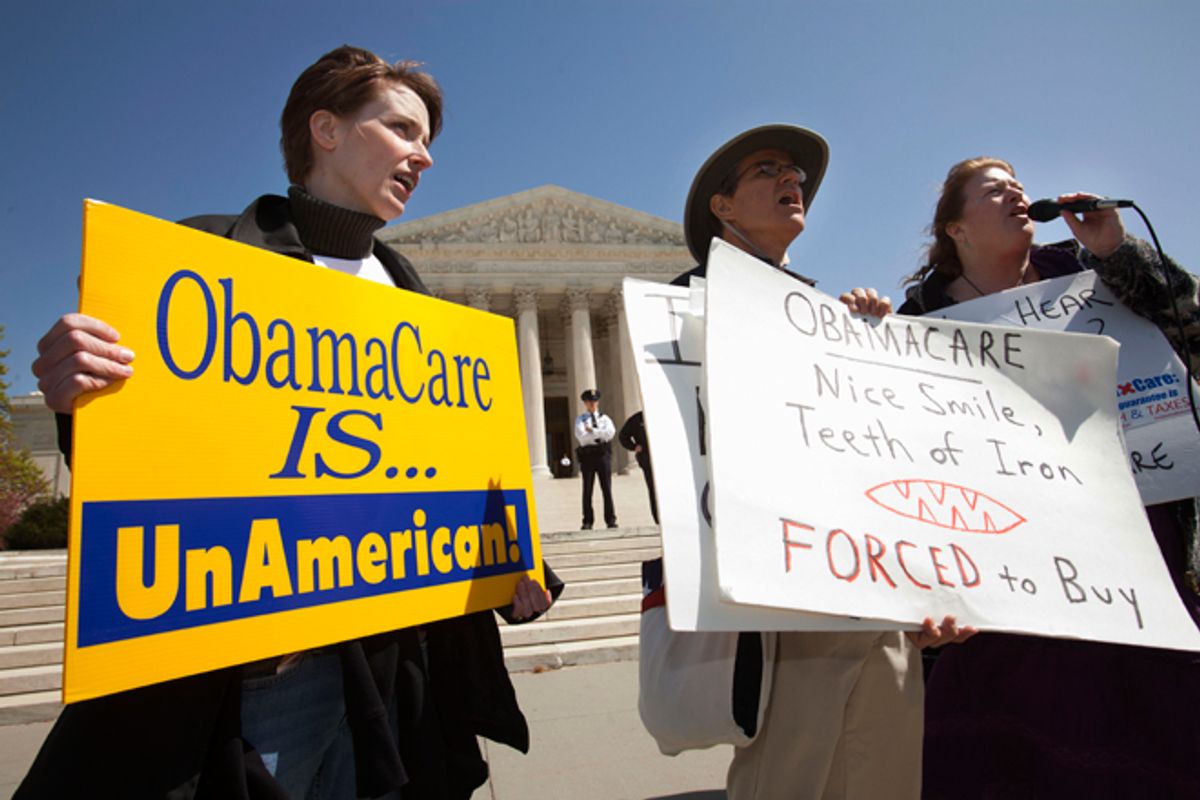 If the Supreme Court strikes down the Affordable Care Act, this week, you’ll have the National Federation of Independent Business to thank for it, at least in part. The group is the lead plaintiff in one of the two lawsuits  that made it to the Supreme Court challenging the constitutionality of the healthcare law.

The NFIB presents itself as the “nonpartisan” voice of small businesses, but liberal critics charge that, much like the U.S. Chamber of Commerce, the NFIB has become a partisan conservative attack dog.

The group has given vastly more to GOP candidates than to Democrats, with over 90 percent of its contributions going to Republicans for the past 15 years, on average. So far this year, they’ve given almost $300,000 to GOP candidates and just $3,500 to Democrats. Crossroads GPS, the 501(c)4 arm of Karl Rove’s American Crossroads, also gave $3.7 million to the NFIB last year. In a Wall Street Journal Op-Ed from December of last year about conservatives’ response to the union money, Weekly Standard editor Fred Barnes said the donation was part of an effort at "funding the right" ahead of this year’s elections. The NFIB's 2012 Small Business Summit in May included speeches from Rove and House Speaker John Boehner. The group’s president, Dan Danner, worked in the Reagan and Bush administrations on business issues.

And this isn’t NFIB's first rodeo on healthcare. The group was involved in the effort to kill President Clinton’s health reform push in the 1990s, even using some of the same arguments it used against President Obama’s law today. Since then, it has also fought labor and environmental regulations and supported tax cuts and entitlement reform.

Some small-business owners who are members of the NFIB have complained that they don’t think the organization has their best interest in mind with its suit. "They're doing a very big disservice to their members," said member Mike Roach from Portland, Ore.

All this has drawn scrutiny from liberal critics. The Congressional Progressive Caucus, a group of more than 70 House Democrats, sent a letter to the NFIB earlier this month asking the group to disclose who is funding their suit against Obamacare, which cost at least $2.9 million in 2010 alone. The group said that $1.2 million of that was paid for by donations and grants from the organization, while the remaining $1.7 million was charged as "contributed services" by the law firm hired for the case.

"Groups that don’t have a partisan agenda generally don’t receive millions of dollars from Karl Rove’s secret money group, run millions of dollars of ads praising Republicans and attacking Democrats, and spearhead partisan legal attacks on the president,” said Josh Dorner, the communications director for the Center for American Progress Action Fund, which filed a friend of the court brief supporting Obamacare.

Small Business Majority, an alternative small business association, conducted a poll, which it says showed that about half of small-business owners want to preserve the healthcare law, while just 30 percent want to repeal it. But a U.S. Chamber of Commerce poll found that 75 percent of small-business owners said the law prevented them from hiring or growing their business. It's hard to tell whose poll is more accurate.

As for the charges of partisanship, the NFIB denies that it’s motivated by anything other than its membership’s concerns. Danner, the group’s president, told Salon in a statement, “As soon as the health-care law was passed, the response from NFIB members was immediate and overwhelmingly supportive of challenging the constitutionality of the law in Court. NFIB has always been, and will always remain, true and accountable to its membership of America’s smallest businesses.”