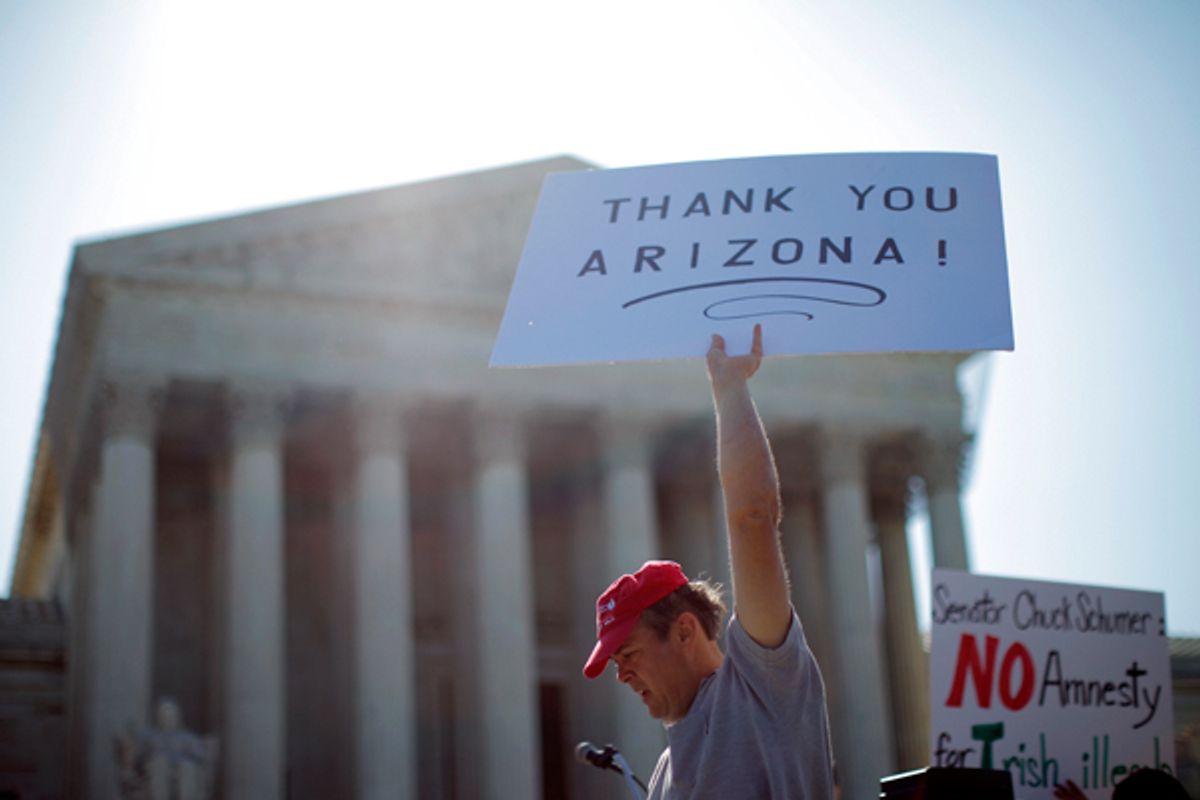 A supporter of Arizona's "show me your papers" immigration law demonstrates in front of the Supreme Court. (AP/Charles Dharapak)
--

The Supreme Court struck down several provisions in Arizona’s harsh SB 1070 immigration law today, but upheld its most controversial one, which requires police officers to check the immigration status of suspected undocumented immigrants. Punting the decision on the Affordable Care Act to later in the week, the court ruled 5-3, with Justice Elena Kagan recusing herself because she had worked on the case in her previous job as solicitor general.

The key question today was whether Arizona’s law violates the federal government's authority to implement and enforce immigration policy. On the so-called "show me your papers" provision, the court ruled, “the mandatory nature of the status checks does not interfere with the federal immigration scheme.” Arizona's law requires police officers to check the immigration status of anyone already in custody if there is “reasonable suspicion” that the person is undocumented. That provision has never actually gone into effect, like most of the law, thanks to earlier court rulings. Arizona can now implement the "papers please" provision, and the court’s ruling provides guidance on how it can do so legally.

The Obama administration, which brought the suit against Arizona, focused its arguments on questions of who has jurisdiction over immigration questions -- the states or the federal government -- largely ignoring questions of civil liberties and potential profiling. Liberal critics argue the law will lead to racial profiling, as police officers will disproportionately ask for papers from Latinos. Profiling could become an issue later once the law is implemented, but someone needs to be racially profiled before a suit can be brought.

Other provisions, however, were struck down, such as one making it a state crime for undocumented immigrants to seek work and another that aimed to register undocumented immigrants. "Arizona may have understandable frustrations with the problems caused by illegal immigration while that process continues, but the state may not pursue policies that undermined federal law," read the majority opinion, written by Justice Anthony Kennedy. The court also struck down part of the law that allowed warrantless arrests of aliens who could be deported. "As a general rule, it is not a crime for a removable alien to remain in the United States," the majority ruled. In other words, simply being in the U.S. without legal status is not a crime per se.

The majority was an unusual coalition of the conservative Chief Justice John Roberts, moderate Kennedy, and liberal Justices Ruth Bader Ginsburg, Stephen Breyer and Sonia Sotomayor. Meanwhile the conservative bloc concurred with some of the majority's ruling, but would have upheld more of Arizona’s law. In a lengthy and at times heated dissent, Justice Antonin Scalia argued that any state has the right to exclude people from its territory, writing, “In light of the predominance of federal immigration restrictions in modern times, it is easy to lose sight of the States’ traditional role in regulating immigration — and to overlook their sovereign prerogative to do so.”

His opinion is also already being seen as a shot at the Obama administration’s recent use of executive authority to implement some provisions to help undocumented immigrants. “What I do fear — and what Arizona and the States that support it fear — is that  'federal policies' of non-en­forcement will leave the States helpless before those evil effects of illegal immigration that the Court’s opinion dutifully recites in its prologue (ante, at 6) but leaves unremedied in its disposition,” he wrote. Indeed, Obama’s policy toward 800,000 young undocumented immigrants who meet certain conditions is essentially one of non-enforcement. “Must Arizona’s ability to protect its borders yield to the reality that Congress has provided inadequate funding for federal enforcement — or, even worse, to the Executive’s unwise targeting of that funding?” he wrote.