Obama's enemies use the new Maraniss biography to impeach his memoir. The truth is more interesting 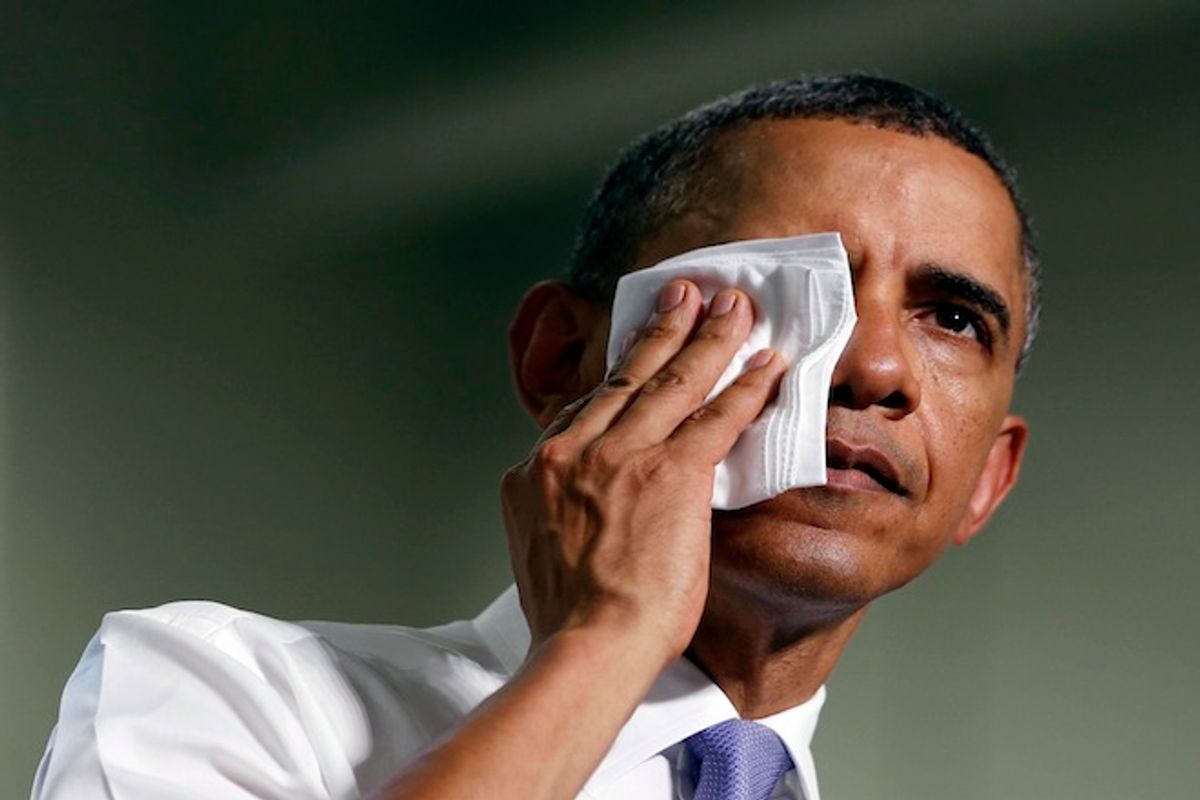 Republicans have tried but mostly failed to use David Maraniss' "Barack Obama: The Story" to prove the president told big lies in his memoir "Dreams From My Father" and in other accounts of his past. The official Republican National Committee site has compiled every possible discrepancy the book supposedly reveals, even charging (which Maraniss does not) that he stole his mother's line that "baking cookies wasn't exactly at the top of her priority list" from Hillary Clinton. If only Mark Penn had known that in 2008!

In fact, what's most noteworthy aren't the discrepancies Maraniss found in Obama's official story, but how many right-wing lies he debunked. The president was born in Hawaii. He is not a secret Muslim; in fact, his Kenyan father owed his education and his American sojourn to evangelical Christians. Those mysterious New York years? Not mysterious, just kind of dull. Which unsavory sponsor paid for his Ivy League education? Mostly his grandmother, along with some student loans.

The most significant of Obama's elisions and omissions – or "compressions" and "composites," as he describes his departure from strict fact in his own memoir – have to do with race, and particularly his relationship with whiteness: his own, and that of his family and friends. Again, the right finds these details scandalous. In the end, despite the new facts, I'm not sure Maraniss tells us much that we didn't already know about Obama's racial journey. But the details of what Obama included in his story, as well as what he left out, help us understand the way he assembled himself out of what he got from his forebears in Kansas and Kenya, along with his own will and imagination.

To read Maraniss' biography merely for what it proves or disproves about "Dreams" disrespects the Pulitzer Prize-winning author, who's written a thoughtful, deeply reported journey into the president's family history, all on its own. Besides, "Dreams" wasn't Obama's official campaign biography, but the work of an ambitious young man who seemed as likely headed for a literary career as a political one. Treating the discrepancies Maraniss finds as though Obama lied on his resume seems an overreaction. "Dreams" was, rather explicitly, a racial coming-of-age story, and in Maraniss' telling, the book seems not merely the tale of Obama's racial self-creation, but an integral part of it.

Maraniss takes pains to note that many of the discrepancies that thrill Obama-haters are the result of family storytelling and mythmaking, or one party to an event – possibly Obama, possibly someone who contradicts him – misremembering, not intentionally misrepresenting. Heroic tales about his Kenyan grandfather being tortured by the British and his Indonesian step-grandfather dying in a freedom struggle, which Maraniss finds to be almost certainly false, were accepted family lore handed down to Obama, not something he concocted to make himself the progeny of revolutionaries. The book's theory that his mother, Ann Dunham, actually left his father, rather than the other way around, and possibly because of abuse, seems believable (although the abuse notion comes from the way Obama Sr. treated his other wives, not from any direct evidence of his treatment of Dunham). But it seems more likely that Obama didn't know the truth than that he deliberately lied in his book, since "Dreams" ultimately reveals his father's alcoholism, womanizing, terrible parenting and erratic and self-destructive behavior, in painful and humiliating detail.

By far the most interesting revelations, and perhaps the most important, have to do with the way Obama handles issues of race, and his own relationship with whiteness. Maraniss treats Obama's occasional story-embroidering with generosity. "I think it says more about a writer’s pressures to try to tell a story than anything about his larger character," he told the crew on "Morning Joe" last week. But he does make the case that the president often doctored his story to make himself seem "blacker and more disaffected."  On the right, that's a serious charge. On National Review Online Mark Steyn uses Maraniss' findings to make Obama an example of how "the beneficiaries of boring middle-class Western life seek to appropriate the narratives and thereby enjoy the electric frisson of fashionable victim groups." That's silly. But what did Obama exaggerate or leave out of his coming of age, as he described it, and what can it tell us?

One funny example has to do with Obama's claims that he didn't get enough playing time on his high school basketball team because his coach wasn't partial to his "black" style of play. In fact, Barry Obama struggled for playing time because he wasn't as good as most of the other guys on his state-championship team. Ironically, he couldn't dunk and he was known for his "no-jump jump shot," stereotypes that are more often associated with white players. The disciplined future president continued to work on his game, though, so that when his high-school teammates came to the White House to shoot hoops with their old friend, one remarked, Wow, Barack is better than Barry.

Maraniss also finds that the working-class black classmate Obama names "Regina" was a composite, and the details of her "black" grandmother scrubbing floors were probably drawn from the story of a white friend's working-class grandmother, whose actual name was Regina. That's a little weird. It would be a damaging discovery if Obama had used the tale to mute the impact of class in America. But in fact, he uses Regina's story as a way to think about the effects of class and gender on Americans of all races, linking Regina's grandmother's struggles to his own grandmother's. "I saw that what bound us together went beyond anger or despair or pity … My identity might begin with the fact of my race, but it didn’t, couldn’t, end there," he wrote. I'm not sure why he took that literary liberty, but no harm, no foul, in my book.

The most significant distortion is one I already wrote about at length: two dramatic incidents that Obama said led to his breakup with his serious white "New York girlfriend" didn't happen the way he described. The most disturbing anecdote involved the girlfriend cluelessly asking "why black people were so angry all the time" after seeing a play by a fiery black playwright. Maraniss finds the woman in question, Genevieve Cook, who said nothing of the kind ever transpired between her and Obama; the only thing remotely similar she could remember was attending a raucous screening of "Beverly Hills Cop" in an all-black crowd. (Obama admitted to Maraniss that while Cook was indeed his "New York girlfriend," she did not utter the "why are black people angry?" line. The experience occurred with another woman, he said.)

In "Dreams," Obama also depicted Cook as the entitled daughter of uber-privilege trying to lure him into her wealthy white world, when “she felt as estranged from that milieu as he did, and he knew it.” Cook tells Maraniss, “That wasn’t my world. I was through and through infused with the sense of being an outsider, like Barack was. The ironic thing is he moved through the corridors of power in a far more comfortable way than I ever would have.” Caricaturing Cook that way felt a little bit unkind.

Maraniss made me most conscious of the under-examined influence of Obama's white mother, Ann Dunham, in his life. Obama himself admitted, after she died, that he wished he’d paid more attention to his mother’s formative role in his life when he wrote "Dreams." During the presidential campaign she was mostly a specter, a young white face in ads and news segments, hugging her adorable black son. No one knew much about the brave anthropologist researching Javanese craftsmen in Indonesia. (Janny Scott's 2011 biography, "A Singular Woman," belatedly filled in some of those blanks, and Maraniss cites it in his own work.) Yet Maraniss makes clear, if it wasn't clear already, that Dunham’s liberal, multicultural views had at least as much to do with the person Barack Obama grew up to be as the fact that he had a black father.

The right has already made the case that Obama has given short shrift to his mother's place in his life -- but they slight her by getting her story wrong, too. In "A Bound Man," conservative Shelby Steele's meditation on Obama, he chided the president for neglecting his white mother’s role in his life by choosing “blackness,” and argued that for Obama, “liberalism is blackness.” That’s ridiculous. For Obama, liberalism is the legacy of being raised by Dunham and her parents in Hawaii and Indonesia. He grew up to live his mother’s values: curiosity about the world, egalitarianism, concern with social and racial justice. You might say that for Obama, liberalism is whiteness, because he got his liberal American politics from the white side of his family. Both are foolish claims. Yet Maraniss makes you think about the parts of the story behind our first black president that get less attention.

Still, I didn't find that any of the compressions or elisions uncovered by Maraniss challenged the way Obama has presented his own story, in "Dreams" and elsewhere: He was a mixed-race kid abandoned by his black father and sometimes neglected by his white mother, mostly raised by white grandparents, with few ties to any black community, who set out as a young adult to make a place for himself. I think Obama has always been pretty honest about how he did that, whether looking for a city, a church or, ultimately, to form his own family. In the end, Maraniss concludes he exaggerated the extent of his outsider status – but who can judge by how much, since outsiderness is at least partly a state of mind? Whether he recalls his stoner friends as misfits, when in fact they were happy high-achievers, or depicts himself apart from Punahau Prep when he was in the thick of it; or even suggests his basketball coach thought his playing style was too "black," well, mostly we're second-guessing a teenager here.

I found Maraniss' account of Obama's supposedly mysterious New York years the most fascinating, mostly for their dullness. He finds plenty of people who knew Obama there, but he also shows that those years are shadowy because Obama himself was a kind of shadow, behind a "veil," in the words of Genevieve Cook, or "The Moviegoer," in Maraniss'. It is striking the extent to which Columbia activists and leading professors either don't remember him or recall him as someone on the sidelines. It makes his rapid rise to the Harvard Law Review presidency, the Illinois Legislature, the U.S. Senate and the presidency all the more remarkable. Yet the qualities Maraniss depicts in the young-adult Obama -- discipline, ambition, caution and a unique ability to cross boundaries and synthesize difference – are still evident in President Obama and contributed to his rise.

"Barack Obama: The Story" won't quiet the conspiracy nuts. Crazy righties now charge that Obama's team had his love letters doctored to make him look more intellectual -- and to correct his grammatical mistakes -- before an ex-girlfriend gave them to Maraniss. (Wouldn't Obama's Chicago-thug operatives simply confiscate them instead?) No doubt Obama-haters will use the book to find more reasons to hate him. Others will find details that help them understand our often-compromising, occasionally risk-taking president, and why he still remains, to some extent, behind a veil.