Gay marriage should be the main issue in Iowa's state Senate race. So why are Republicans holding back? 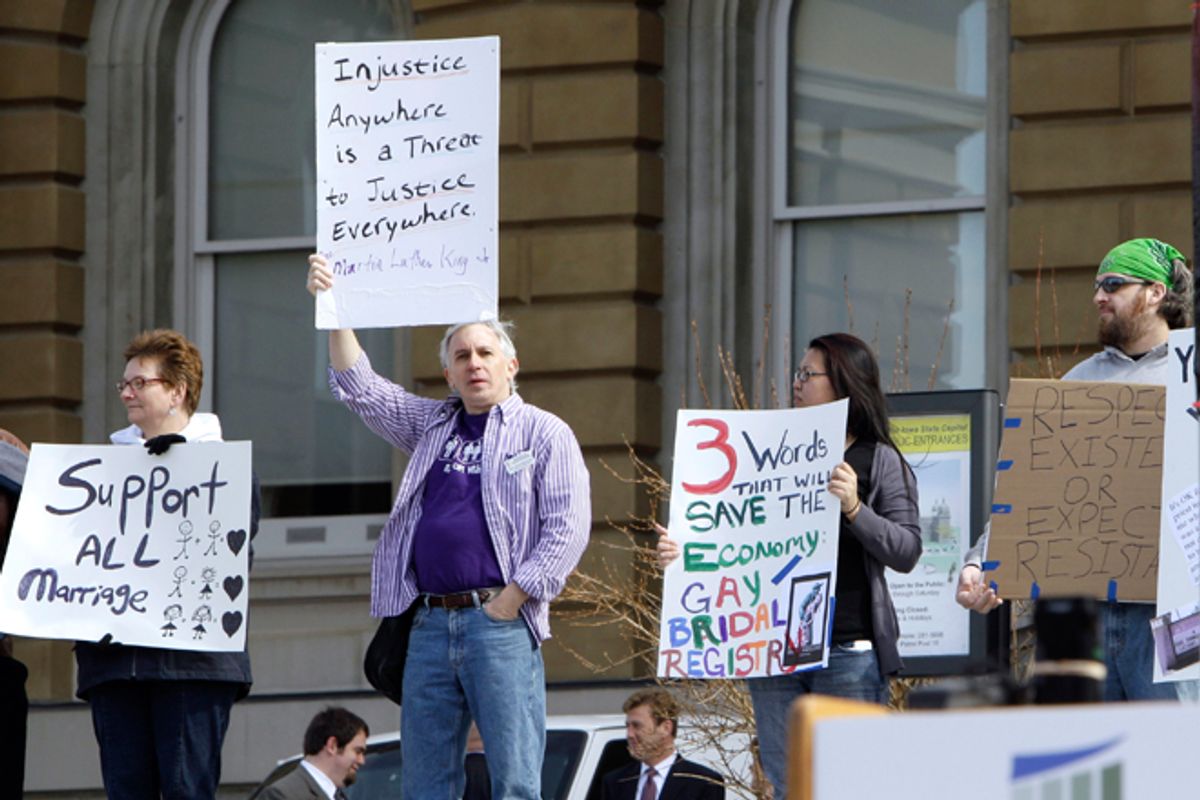 Opposition to gay marriage helped sway the 2004 presidential election, when a constitutional amendment in Ohio may have turned out enough Republican voters to help George Bush prevail in a contest where gay marriage was a minor issue. This year, it may not even swing an Iowa state Senate race, where it actually is the most important issue.

Democratic Senate Majority Leader Mike Gronstal, perhaps the most powerful politician in the state, has long been the top target of Iowa social conservatives because of his efforts to keep same-sex marriage legal in the Hawkeye State. As the election approaches, not only are Republicans deemphasizing that issue in his western Iowa district but the target is slowly fading from Gronstal’s back.

In 2009, Iowa’s Supreme Court ruled that the state’s ban on gay marriage was unconstitutional. The result was an outcry among social conservatives who were outraged at such “legislating from the bench.” The result helped further gin up Republican turnout in the state and helped the party take the governor’s mansion and the state House of Representatives during the Tea Party wave of 2010.

Democrats did manage to hold on to a single-seat majority in the state Senate. By this narrow margin, Gronstal has blocked a state constitutional amendment to ban gay marriage, proclaiming last year that “people’s rights should not be put to a popular vote. We didn’t put slavery to a vote of the people.” This has made him public enemy No. 1 to Iowa’s conservative activists, who have been waiting patiently since for the chance to put up a candidate against the Democratic Senate majority leader in his swing district in Council Bluffs, Iowa.

Now, less than five months before Election Day, leading social conservatives in the Hawkeye State are simply focused on “hold[ing] Gronstal in check,” in the words of leading conservative activist Bob Vander Plaats. Not only that, they are shifting emphasis from social issues to economic ones, in an attempt to capture some momentum in the district.

Craig Robinson, a leading conservative activist in the state and founder of theiowarepublican.com, notes that “the marriage issue always plays somewhat, but it’s not what the entire race is going to be about.” Instead, Robinson emphasized the failure of the Iowa Legislature to pass tax reform, which he blamed on Gronstal. This was echoed by Gronstal’s Republican opponent, Al Ringgenberg, who said, “The number one issue I’ve noticed is property tax reform.” Robinson also downplayed the significance of the race, noting Gronstal’s “incumbent advantage” and adding that it was more important for Republicans to simply take back the Senate rather than claim Gronstal’s scalp. This was echoed by Vander Plaats, who said he and his organization, the Family Leader, were as focused on keeping Gronstal “pinned down” to prevent him from helping other Democrats “as defeating him.”

Taking back the Iowa Senate is not the only concern of many Iowa social conservatives; they also want to take back their own party. Steve Deace, a nationally syndicated talk radio host and prominent local activist, noted a real lack of conservative enthusiasm on the ground in Iowa. He said there's “much more discussion among conservatives about what is the purpose and point of the Republican Party than about Mike Gronstal.” Instead of blaming Gronstal for the local GOP’s failures, they’re blaming the Republicans who failed. In fact, Deace actually praised Gronstal’s leadership, saying conservatives “could use a few Mike Gronstals on our side.”

The GOP is also putting up an imperfect candidate. Al Ringgenberg is a retired JAG prosecutor in the Air Force who likes to go by “Colonel Al.” Prominent Democratic insiders variously described Ringgenberg as "a goofball” and “pretty goofy.” He has also posted weak fundraising numbers: His campaign committee, “Patriots for Colonel Al,” had less than $7,000 on hand according to its most recent report. When I talked to Ringgenberg, he felt confident that he’d have the money he needed. Colonel Al was about to mention what he thought his campaign’s budget would roughly be, but then he backed off, saying that he was going to use “Sun Tzu military tactics, not going to give it away.” Instead, he merely noted it would be both “realistic” and “sizable.” Ringgenberg did note later that he thought it would be a “conservative wave” during which he could be outspent by a margin of 7- or 8-to-1 and still prevail.

In contrast, Gronstal, who could not be reached for comment, has almost half a million dollars on hand, including significant donations from out-of-state gay donors who support his efforts on marriage. This makes a difference, as Council Bluffs is in the Omaha media market, which has the most expensive television advertising in the state. As Iowa-based Democratic consultant Mark Langgin noted, based on the cost of the advertising as well as the flawed Republican candidate, the race just isn’t an efficient one for Republican strategists to focus on. Further, Gronstal doesn’t just have a massive financial advantage, but according to one well-placed state Democrat, organized labor already has staff on the ground supporting him in addition to his own campaign workers.

This should be a race that Republicans can win. It’s a vulnerable incumbent in a tossup district who has already alienated many swing voters with unpopular stands. But it says something about the salience of social issues in November that in southwest Iowa, Republicans don’t feel comfortable running on gay marriage against a politician for whom that has been his signature issue.