Is America threatened by a maid shortage? 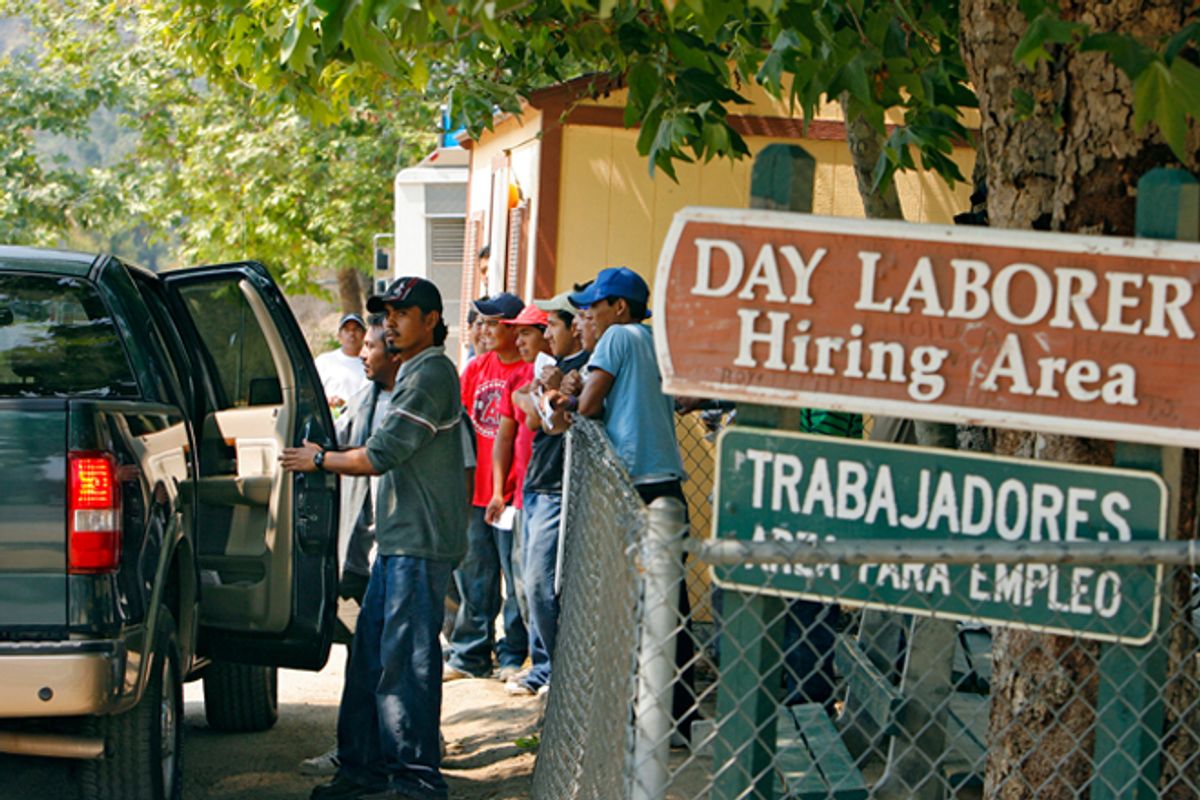 Day laborers enter a truck after being hired at a day labor hiring area in Laguna Beach, Calif. (Reuters/Lucas Jackson)
--

Is there a danger that maids and other menial household servants in the U.S. might make too much money? Matthew Yglesias, economics and business correspondent for Slate magazine, thinks the danger is real, and he proposes a solution: flooding the low-wage labor market with even more unskilled immigrants.

The very idea should appall Americans on the center-left. For most of American history, progressives and populists were suspicious of employers and investors who promoted mass immigration in order to lower wages, weaken unions and maintain a large “reserve army of labor.” By 2000, however, the traditional pro-labor argument against mass unskilled immigration had vanished from center-left circles. One of the rare exceptions to the rule is the progressive blogger Matt Stoller: “Corporate America is perfectly happy to see more immigration, because immigration can depress wages.”

Much of this recent reversal in liberal attitudes toward immigration has to do with the replacement of the white working class by racial minorities as the allies of upscale white progressives. Because the African-American share of the population is relatively constant, Democratic hopes for majority status without sufficient white working-class votes rest on the immigration-fueled growth of the Latino population.

The new immigration taboo on the left is also explained in part by the collapse of unionization in the private sector, as opposed to the public sector. Credentialism ensures that public school teachers, unlike, say, construction workers, janitors or maids, do not compete with immigrants. But the most important factor in the taboo that forbids critical discussion of unskilled immigration on the left side of the political spectrum is class. For years I have argued that, while the costs of unskilled immigration fall disproportionately on low-income workers in the U.S., the gains flow to the upscale servant-employing classes — not only the rich 1 percenters, but the affluent 10 or 15 percenters.

I am pleased to report that Yglesias has now proven me right about the crude class interest behind much bipartisan elite support for mass unskilled immigration.

Yglesias argues that in addition to liberalizing skilled immigration, a policy I have long advocated, the U.S. should also increase unskilled immigration. In May 2012, the unemployment rate for those without a high school education was 13.7 percent, and 9.1 percent  for those with high school diplomas; the true number, including those who have dropped out of the labor market, is probably much higher.

In light of the mass unemployment of less-educated workers in this country, you would think that Yglesias would feel compelled to present a powerful argument for arguing that we need to import more low-skilled workers. Instead his argument rests on the narrow self-interest of the elite professional class to which he and I belong.

Yglesias concedes that low-wage immigrants can depress wages. He sees the depression of wages by immigration not as a phenomenon to be denied or minimized but as a desirable outcome to be promoted.

He correctly argues that, absent a high and continued level of unskilled immigration, the labor market might cause the wages that domestic servants could command to rise, in response to the greater scarcity of labor. Today’s employers of servants would be faced with the choice — quelle horreur! — of paying their underpaid servants more or doing their own chores. To prevent the labor market from working to the benefit of low-wage workers, Yglesias calls for the government to deliberately intervene in the economy to keep wages for maids low, by expanding unskilled immigration.

As callous as he is candid, Yglesias explains that a large pool of low-wage, menial servants allows members of the elite professional class to avoid wasting time on household chores:

Immigration skeptics often act as if there’s some fixed pool of jobs that we compete for. But it’s obvious that in a world without immigrant housecleaners, we wouldn’t have an equal number of much-higher-paid native-born maids. What we’d have is less housecleaning being done on a market basis and more being done as unpaid work at home. For many middle-class families that would be pure waste. Time spent cleaning the toilet that could be spent on higher-value labor, on leisure, or on quality time with friends and family.

Someone should tell the business and economics correspondent of Slate that, unlike upscale journalists in Washington and New York, most Americans can’t afford maids and nannies.

Yglesias is arguing for “industrial policy” in the worst sense — using government policy (in this case, immigration policy) to subsidize a particular, politically favored set of “winners” (the employers of maids), at the expense of less influential people (maids). Unlike other versions of industrial policy, which seek the permanent enhancement of the productive industrial base of the U.S., Yglesias-style immigration-based industrial policy seeks merely to free the most affluent people in America from having to monitor their own kids or clean up the messes they make themselves.

For what it is worth, I have been reasonably productive, publishing 17 books in 14 years, while administering think tank programs, writing columns and scholarly essays and occasionally teaching courses, even though, throughout my adult life, I have never hired a maid. I scrub my own toilet, wash my own dishes (with a labor-saving device called a “dishwasher”) and I wash and dry my own clothes (with another amazing machine called a “washer-drier”). Few Americans have been more productive than Thomas Edison, who shared my old-fashioned values.  When the great electrical engineer Nikola Tesla met Edison, the young European immigrant recalled: “I was thrilled to the marrow by meeting Edison, who began my American education right then and there. I wanted to have my shoes shined, something I considered beneath my dignity.  Edison said, “You will shine the shoes yourself and like it.’ He impressed me tremendously.  I shined the shoes myself and I liked it.”

But just for the sake of argument, let us stipulate that Yglesias is right. The productivity of the small number of well-paid, well-educated, upper-middle-class Americans, and their quality time with friends and family, would be enhanced if they outsourced their household chores to servants. Let us stipulate, as well, that it would be wrong to ask these elite Americans to pay their maids slightly more money or, alternately, to wash their own clothes or take out their own trash.

The goal sought by Yglesias — government intervention in the marketplace to free elite Americans from the need to do household chores — could be achieved by means other than the crude, clumsy, indirect method of using federal immigration policy to lower the wages of maids and other domestic workers below what would otherwise have been their market rate. Many European countries use “service vouchers” to allow homeowners to bring in domestic workers to do various chores. A government subsidy makes up the difference between the low rate paid by the homeowner and the higher wage of the worker. While the costs of Yglesias’ immigrant-worker subsidy to the American overclass falls on other low-wage workers, the costs of service vouchers for working-class Europeans is borne by the taxpaying population as a whole. That’s much more fair.

In Democracy Journal, I recently proposed the adoption of service vouchers for home-based eldercare in the U.S. Perhaps Congress should create an “Yglesias voucher” that would allow affluent Beltway journalists and other upscale Americans to purchase the services of maids at reduced, government-subsidized rates, even as the maids were paid good wages. The maid would be paid better for scrubbing the elite pundit’s toilet, while the extra time would allow the pundit to write a few more blog posts and tweets — a win-win situation. Instead of flooding the already-flooded low-wage labor market further, wouldn’t it be more efficient as well as more honest for the taxpayers to subsidize the lazy snobs in America’s elite directly?