Did John Roberts switch his vote?

Updated: The dissents suggest the court was set to overturn Obamacare -- until Roberts suddenly changed his vote 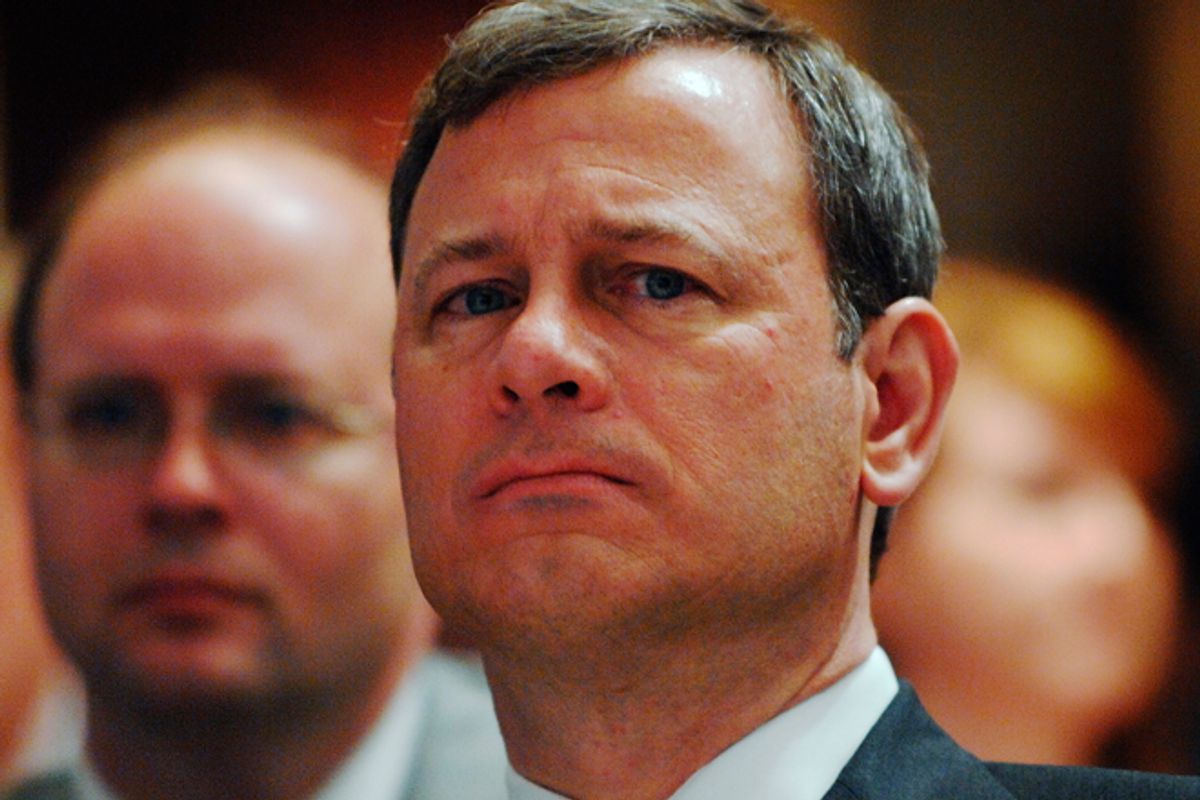 Has a second “switch in time” saved nine? That’s the unavoidable impression that a reading of the four dissenters’ joint opinion in the PPACA case leaves.  The first “switch in time” also involved a Justice Roberts – Owen Roberts, who in 1937 suddenly switched his vote in a case whose outcome signaled the end of a five-vote majority that was blocking much of the Roosevelt administration’s New Deal.

At the time, Roberts’ jurisprudential conversion seemed extremely suspicious to many observers, given that it was announced just a few weeks after FDR had presented legislation proposing an expansion of the Supreme Court to 15 members – a plan attacked by critics as a scheme to “pack the Court” with justices who would uphold New Deal laws. Cynics began referring to Roberts’ sudden change of heart as “the switch in time that saved nine” – that is, that kept the court’s membership at nine justices.

Subsequent historical research suggests that Roberts had already decided to change his vote before FDR announced his plan to expand the court, but we shouldn’t let that detail interfere with the delightful semantic coincidence that it very much looks as if the second Justice Roberts did “switch in time” — at least in part to shield nine justices from the political fallout sure to result from overturning the ACA.

Rumors had been circulating in legal circles for weeks that Chief Justice Roberts in particular was under enormous political pressure not to be the vote that would overturn the most significant piece of social legislation passed by Congress in decades. Indeed, in April President Obama took the unusual step of issuing something of a public warning on the subject, saying that he was “confident that the Supreme Court will not take what would be an unprecedented, extraordinary step of overturning a law that was passed by a strong majority of a democratically elected Congress.”

It is impossible for a lawyer to read even the first few pages of the dissent without coming away with the impression that this is a majority opinion that at the last moment lost its fifth vote. Its structure and tone are those of a winning coalition, not that of the losing side in the most controversial Supreme Court case in many years. But when we get to Page 13, far more conclusive evidence appears:  No less than 15 times in the space of the next few pages, the dissent refers to Ruth Bader Ginsburg’s concurring opinion as “Justice Ginsburg’s dissent.”

There is one likely explanation for this: The dissent was the majority opinion when those who voted to overturn the entire ACA signed off on sending their text to the printer.  In other words, Chief Justice Roberts changed his vote at the very last possible moment.

It is inconceivable that the dissent reads as it does by inadvertence. We can be sure every word of it was proofread countless times by the dissenters’ 16 clerks, all of whom know how to make a global change on a word processing program.

Another unavoidable conclusion seems to be that the dissenters intentionally left the parts of their text referring to Ginsburg’s “dissent” unchanged. This was a symbolic gesture, intended to reveal, without formally breaking the  justices’ code of silence, what the Chief Justice did to them -- and, as they no doubt see it, to the country and the Constitution --  through his last-moment reversal.

Update: As commenters point out, it is true that  Ginsburg does dissent to part of the majority opinion, while concurring with most of it, but it’s also clear that the four joint dissenters are referring to a full dissent, not a dissent in part, as the following passage makes clear:

Finally, we must observe that rewriting §5000A as a tax in order to sustain its constitutionality would force us to confront a difficult constitutional question: whether this is a direct tax that must be apportioned among the States according to their population. Art. I, §9, cl. 4. Perhaps it is not (we have no need to address the point); but the meaning of the Direct Tax Clause is famously unclear, and its application here is a question of first impression that deserves more thoughtful consideration.

In addition, the joint dissenters refer consistently to Ginsburg's item as "the Dissent." This phrase makes no sense except in the context of a majority opinion referring to a single dissent.

Update 2: Here is all but conclusive evidence from the opinions themselves that, when Ginsburg originally wrote her opinion, what is now the joint dissent was the majority opinion.  On p. 35 of Ginsburg’s opinion, she writes:

In failing to explain why the individual mandate threatens our constitutional order, THE CHIEF JUSTICE disserves future courts. How is a judge to decide, when ruling on the constitutionality of a federal statute, whether Congress employed an “independent power,” ante, at 28, or merely a “derivative” one, ante, at 29. Whether the power used is “substantive,” ante, at 30, or just “incidental,” ante, at 29? The instruction THE CHIEF JUSTICE, in effect, provides lower courts: You will know it when you see it.

This passage receives a direct response not in Roberts’ opinion, but in what is now the joint dissent (p.15):

The dissent claims that we “fai[l] to explain why the individual mandate threatens our constitutional order.” Ante, at 35. But we have done so. [Emphasis added]

“We” in this context means “the opinion of the Court.”  Ginsburg edited her opinion to reflect that her criticisms, aimed originally at what was the majority opinion when it had Roberts’ vote, were now only directed at Roberts himself.  The dissenters, by contrast, didn’t bother to cover the Chief Justice’s  tracks.