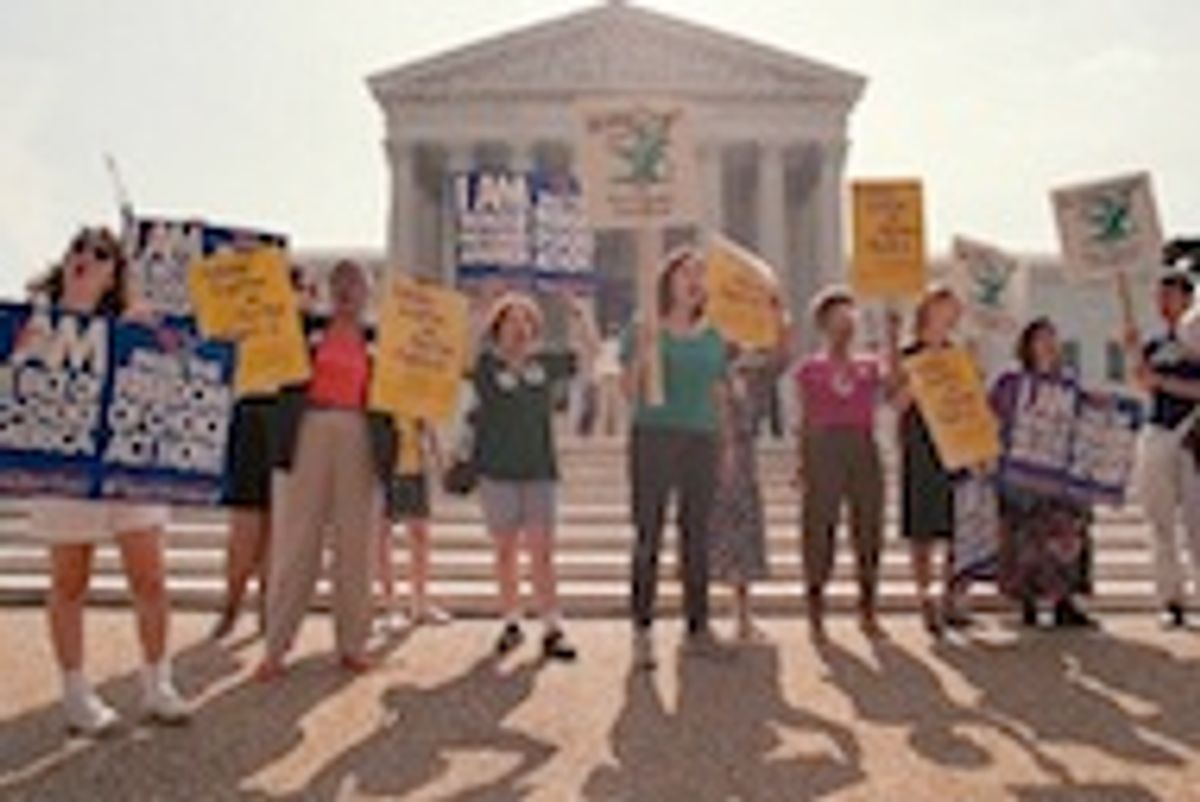 The 2010 Citizens United decision opened the floodgates for an unlimited infusion of cash in political campaigns. Forget the quaint $2,500 cap on individual contributions; super PACS have unleashed the war chests of the 1 percent. Right-wing billionaire Sheldon Adelson’s $10 million gift to the Romney campaign was just the beginning. Fellow conservative bank-roller Foster Friess admitted on camera that he is working to coordinate his friends: “I’ve reached out to a number of potential donors who [weren’t] involved so much before to help Gov. Romney with his Restore Our Future PAC.”

In other words, the guy who thinks an aspirin between your knees is the best method of birth control is putting together a secret funding cabal to bankroll right-wing politicians.

Meanwhile, private donations are increasingly important in the nonprofit world as well. Government contracts have evaporated for many human services agencies, state budgets have slashed funding for public universities, earned revenue has dwindled for media outlets, and subscriptions for arts and culture institutions have taken a major hit, leaving a broad range of institutions scrambling for a new stable base of revenue. Changing Our World, a fundraising consultancy, published a paper in 2011 on the potential for private philanthropy to fill gaps in health care, education and human services left by massive public deficits. According to the report, nonprofits in those sectors now would need 30-50 percent more in donations to make up the losses of government support – the equivalent of the gains made over five years during a boom economy.

Arguably, the influx of private expenditures into our electoral processes and the increasing dependency on private largess in the nonprofit sector are part of the same tide. As Senator Bernie Sanders put it, "we are moving toward an oligarchic type of society." The same narrow slice of the population will now be the funding source for both the political campaigns that determine our leaders, and for the nonprofit sector that provides social welfare. After all, among the top donors to super PACS, David Koch named a theater at Lincoln Center with a $100 million donation and has given tens of millions more to cancer research, while Sheldon Adelson funds medical research and varied causes within the Jewish community. On the left, James Simons is one of the top 50 givers in the US with his support of autism research and math and science education (in public schools and universities, no less), while Jeffrey Katzenberg’s giving spans the AIDS Project, higher education, museums, and inner-city education.

Increasingly, any aspiring executive, whether in the White House or the local theater, will have to demonstrate a strong network and ability to persuade members of the wealthiest classes. The path to political and civil-society leadership has become metaphorically paved with gold.

In both the political and nonprofit spheres, any fundraising professional with a large network, preexisting relationships with wealthy prospective donors, and skills at closing big gifts should be well positioned to compete in the heated race for private cash. Troubling as this trend may be for our democracy, the marketplace could prove favorable to one constituency -- the women who fill the ranks of the fundraising profession.

Women make up close to 75 percent of the nonprofit fundraising field, according to Michael Nilsen of the Association of Fundraising Professionals. And over the past 30 years the field has become more and more dominated by women. Even within the past two years, hiring at a major fundraising consulting firm has increased to “sixty-something percent, when in 2010 it was 55 percent,” according to an executive at the firm.

Women in Development, a networking association with chapters in New York, Boston and New Jersey, traces the dramatic increase on its Web site. At its inception in the mid-1980s, WiD New York was an informal networking group for the few women working in the field. By 1999, women were 61 percent of fundraisers and today they far outnumber men.

Theoretically, this trend should spell increased power in influential institutions that shape our public culture and policy. According to Changing Our World director of research Susan Raymond, “the C-suite of nonprofit institutions is becoming more inclined towards private resource mobilization…the three trends are natural turnover in leadership, the new skill set required for leadership, and that skill set increasingly being held by women who have come up through the fundraising ranks.” Consider the job of university president, now held by record numbers of women like Harvard’s Drew Gilpin Faust, Princeton’s Shirley Tilghman, Penn’s Amy Goodman, and MIT’s Susan Hockfield, all of whom spend the vast majority of their time raising money. The profile of future leaders is increasingly fundraising focused and therefore should be increasingly female.

The competition for private dollars, now a strong imperative in political and nonprofit initiatives, favors those who are trained to state a strong case and make big asks of those capable of giving. Given that criteria, we may be looking at a moment where women are well-positioned to rise to leadership roles just as the very definition of leadership, even in the public and civil-society sectors, depends on the persuading the wealthy to be increasingly generous.

But will this profile of leadership extend into electoral politics? One example of a fast trajectory based on fundraising expertise is the career of Julianna Smoot, now deputy campaign manager of the 2012 Obama campaign after serving as Obama’s finance director in 2008 (raising more money than any race in history), and Senate races of Tom Daschle and John Edwards. Representative Debbie Wasserman Schultz is now chair of the Democratic National Committee, with a major focus on raising money to support Democratic candidates at the local, state and national levels. Senator Kristin Gillibrand and Congresswoman Gabrielle Giffords advanced quickly on the basis of their prodigious fundraising abilities – a 2009 New York Magazine profile noted that Gillibrand raised $2.3 million in 90 days for her Senate campaign and she recently took a trip through London, Paris and Geneva to raise campaign funds. Anyone with the chutzpah to raise money for an American political campaign in the capitals of Europe is certainly a role model for women looking to make it rain, maximally.

Yet according to a recent CBS story, women are far behind in political donations and fundraising, especially within the newly emboldened super PACs. “One look at the list of donors bankrolling these groups makes one thing clear: This new element of American politics is overwhelmingly dominated by men.” The piece reported that of the approximately $31 million given by women, $15 million came from Miriam Adelson, wife of veteran Republican bankroller Sheldon Adelson. Meanwhile, only 44 percent of Obama donors and 31 percent of Romney donors are women. Making large gifts is generally a prerequisite for asking others to do the same, so as women remain on the sidelines as super-PAC donors, it stands to reason that they are also abstaining from mobilizing other potential donors, even for progressive causes like Planned Parenthood.

Lana Moresky, a major Democratic fundraiser, noted that even reliable female donors recoiled from making their regular gifts. “One donor, a very reliable max-out giver to any campaign where I asked for her support, mentioned she felt discouraged by the huge amounts of money going into super PACs and concerned that her gifts would have little to no impact.” Moresky added this was an area of grave concern for her, because “the money that really drives the direction of politics…if we want to be influential, it’s key for women to be involved…I can’t say that enough."

Moresky speculated that nonprofit and political fundraising are different in ways that might be particularly alienating to women: “[A] nonprofit is a do-good cause. Politics is combative, one person against the other.” This divide is echoed by Michaele Ferguson, a professor at University of Colorado Denver, who in her article “Choice Feminism and the Fear of Politics” describes the attraction of ideology-free affirmation for women afraid to be judgmental or radical in ways that challenge entrenched power (like, say, billionaires seeking to secretly influence elections). Raising money for nonpartisan nonprofits, or even organizations with strong political values, that nevertheless are above the brutal competition of direct campaigns, is clearly appealing to many women.

Yet even if women are able to exercise a newly valuable form of power by fundraising for nonprofits, without a corresponding presence in the field of political fundraising, they are forfeiting an avenue for political power otherwise well-suited to their talents. Amy Goldman, one of the few prominent super-PAC donors who has given $1 million to PACs supporting Obama and Planned Parenthood, articulated this very realpolitik approach: "Electoral politics has changed this year, so women need to rethink their strategies and begin to support these new entities, which can be an enormous and powerful force for good."

Eventually, electoral pragmatism pays dividends for those who prefer to work in the nonprofit sector. The very fact that thought leaders in the field have to ask whether philanthropy can make up for the absence of government funding suggests that the nonprofit sector can no longer be divorced from the policies that dictate its burdens. Fundraising for nonprofits may be nominally apolitical, but those on the front lines, with the skills, networks and confidence necessary to shape not only their organizations’ futures but the country’s, should not hesitate to ply their talents in the political arena, which needs their voices and their cash more than ever.