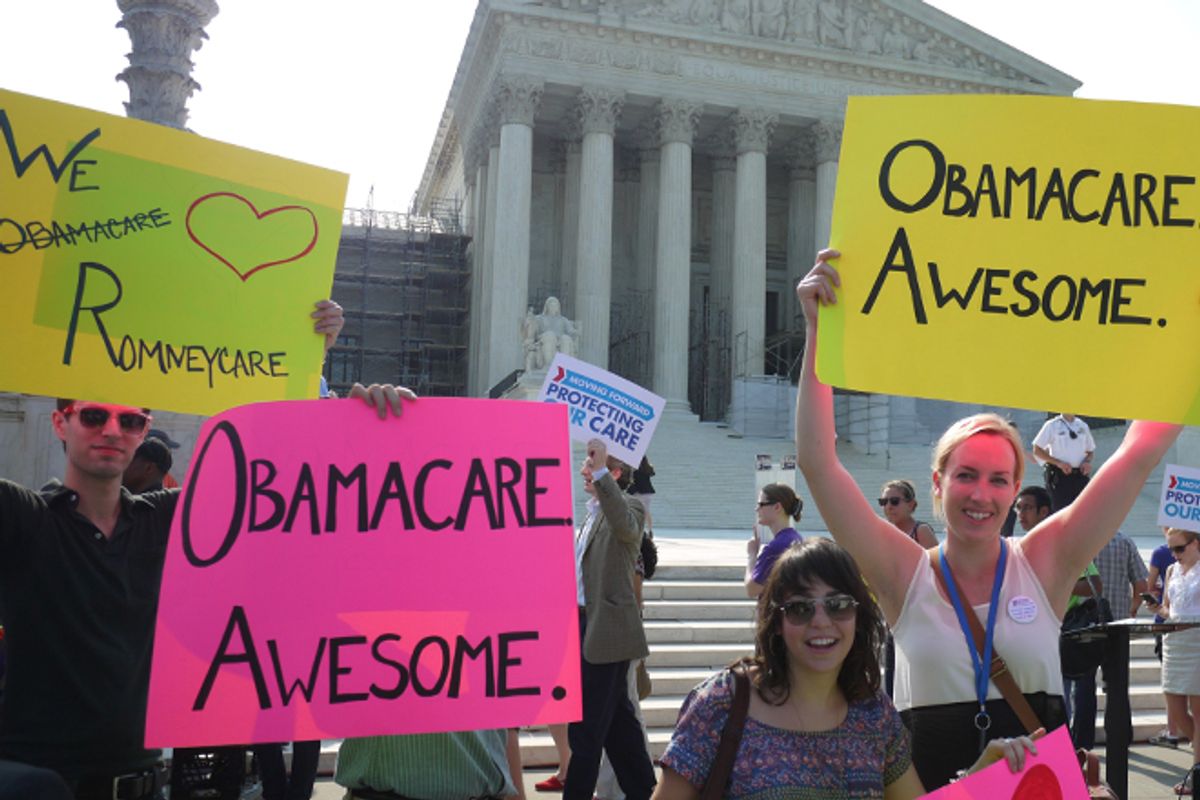 The Supreme Court upheld the vast majority of the Affordable Care Act this morning, with Chief Justice John Roberts joining the liberal bloc of the court to find the individual mandate and most of the rest of the law constitutional. The court did, however, narrowly limit two key pieces of the law.

First, it disagreed with the administration’s justification for the individual mandate, which relied on Congress’ authority to regulate Commerce. Instead, the court ruled that the mandate will survive under Congress’ ability to raise taxes. This was an argument the administration avoided making, worried about the public perception of raising taxes, but many legal scholars felt it was the stronger case all along. The decision means the mandate will function almost exactly as it was intended, with people who refuse to buy insurance forced to pay a tax. Roberts, writing the opinion of the court, concluded "the individual mandate must be construed as imposing a tax on those who do not have health insurance, if such a construction is reasonable."

The other curtailment of the law comes in its expansion of Medicaid for millions of uninsured people. The law forces states to pay for part of the extension, threatening to withhold all of their Medicaid funds if they don't comply. The majority narrowly ruled against this provision, but upheld most of it. "Nothing in our opinion precludes Congress from offering funds under the ACA to expand the availability of health care, and requiring that states accepting such funds comply with the conditions on their use. What Congress is not free to do is to penalize States that choose not to participate in that new program by taking away their existing Medicaid funding,” they wrote.

Roberts’ vote is especially surprising considering that swing Justice Anthony Kennedy voted against the administration. Kennedy wrote the opinion for the minority, and said in his remarks announcing his opinion, "In our view, the entire Act before us is invalid in its entirety." But Roberts saved the day for Obamacare. The conservative reaction to Roberts was swift. Rep. Dennis Ross, a Republican from Florida, said he was "truly disappointed in Justice Roberts and others who allowed this assault on the Republic stand.”

Roberts made the key ruling on the tax versus Commerce Clause issue. Liberal Justice Ruth Bader Ginsburg, in an opinion she wrote along with Justices Sonia Sotomayor, Stephen Breyer and Elena Kagan, joins with Roberts, but says she would have gone further to uphold the mandate under the Commerce Clause. But Roberts' opinion is the important one.

The ruling is a huge victory for the Obama administration on its signature legislative accomplishment, though the rulings on the Commerce Clause and Medicaid expansion are potentially troubling, as much of the progressive reforms on the past century are built on similar constitutional foundations.