Supreme Court ACA ruling: Yes, this is a BFD

The president must now show how Obamacare helps people, not that it's merely constitutional 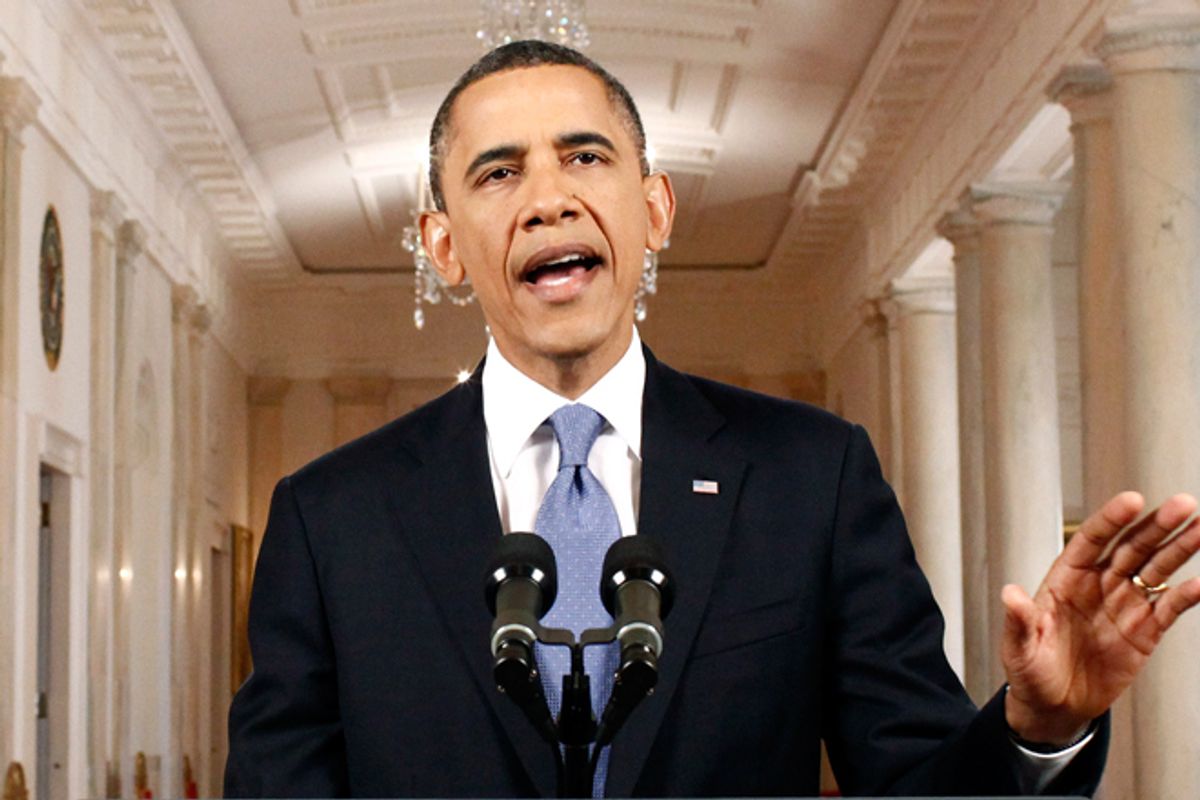 President Obama speaks at the White House after the Supreme Court ruled on his health care legislation. (AP/Luke Sharrett)
--

To borrow the historic words of Vice President Joe Biden, Thursday's Supreme Court's decision upholding the Affordable Care Act was "a big fucking deal" for President Obama. (Or as Democratic National Committee political director Patrick Gaspard tweeted, "It's constitutional. Bitches.") Had the law been struck down, the president's Republican enemies would have been shrieking about the socialist tyrant usurper who'd gotten his constitutional comeuppance by the country's true leaders, the Republican Supreme Court majority. (Actually, I think that's what Justice Antonin Scalia wrote in his dissent.)

But for today's decision to be a decisive political win for the president, he and Democrats have to get out and sell his historic healthcare accomplishment, hard. Poll after poll has shown that Americans like the individual components of "Obamacare" – keeping kids on their parents' insurance until they're 26; preventive cancer screenings; eliminating the cap on lifetime insurance coverage; prohibiting discrimination against folks with preexisting conditions -- while disliking the law itself. They disapprove of the individual mandate, which Chief Justice John Roberts just reframed as a tax.

The right wing turned on a dime after the decision, to hit Obama for raising taxes, of course. The screechy Sarah Palin said it first, and best, on Twitter: "Obama lied to the American people. Again. He said it wasn't a tax. Obama lies; freedom dies." The National Review Online's Jim Geraghty followed quickly: "The term Obamacare should be retired today; now it's the Obama health care tax."

Mitt Romney claimed the country would receive a $500 billion tax increase because of Romneycare, excuse me, Obamacare. BuzzFeed posted 2007 video of Romney Thursday morning calling the individual mandate contained in his Massachusetts universal healthcare legislation "ultimate conservatism," but don't expect the facts to matter to Romney. In fact, the law's penalties would hit between 2 and 5 percent of Americans, according to the Urban Institute; in Massachusetts, fewer than 1 percent of residents paid the penalty in 2009, according to Think Progress.

I'm going to be honest: Even though I predicted here yesterday – and on Twitter this weekend – that Roberts might well find a way to uphold the law, I was pleasantly surprised to see his role in the ruling. I think those of us who expected him to look for a way to uphold the ACA, at least partly in order to keep the court from looking like a radical right-wing panel thwarting Congress (in the case of Citizens United) and even the voters (in Bush v. Gore), turned out to be at least partly right. So was Roberts playing politics in a way I'd have attacked if he overturned the law, but that I like now that he upheld it?

You can judge my political consistency for yourselves, but Roberts more or less answered the question in the final sentence of his decision. "When a court confronts an unconstitutional statute, its endeavor must be to conserve, not destroy, the legislation," he wrote. In the future Democrats may lament such an approach to legislation passed by a Republican Congress that they believe is unconstitutional, but Roberts stayed true to his philosophy of "judicial restraint" as he described it in his confirmation hearings six years ago. For now.

What about Antonin Scalia, the cafeteria constitutionalist who raged against Obama in his dissent on the court's Arizona decision Monday? In hindsight, that may  have been the "tell" that he'd been betrayed by Roberts and condemned to the losing side in the ACA case. Or not.  Brad DeLong finds an amazing detail in Scalia's ACA dissent today -- nine times he refers to Justice Ruth Bader Ginsberg's concurring opinion (she joined the majority with Roberts but wrote her own opinion about the Commerce Clause and legal matters) a "dissent." Of course, an opinion is only a "dissent" if the justice is in the minority, so was Scalia just guilty of wishful thinking? Or did he write his own opinion believing his was the majority? I said yesterday Scalia should stay on the court to make clear its political agenda. Now I'm hoping he resigns in a snit; he seems capable of that kind of reckless self-indulgence.

Beyond politics, I'm not sure what it will mean, long-term, that Roberts hung the majority decision not on Commerce Clause powers to regulate interstate commerce – the backbone of American social welfare legislation for almost a century – but on the government's powers to tax instead, with the "penalty" or "fine" promised by Obamacare reframed as a form of taxation. The court's four liberals thought the law could rely on the commerce clause, but Roberts did not.

Over at the indispensable SCOTUSblog, Lyle Denniston argued that "The rejection of the Commerce Clause and Nec. and Proper Clause should be understood as a major blow to Congress's authority to pass social welfare laws. Using the tax code -- especially in the current political environment -- to promote social welfare is going to be a very chancy proposition." But top SCOTUSblogger Tom Goldstein disagreed: "I dissent from Lyle's view that commerce clause ruling is major blow ... I think that piece of the decision will be read pretty narrowly." We'll see.

Even though I predicted the court would uphold the law, I'd written part of a piece in case it didn't. And the main point I wanted to make is still valid. The patchwork way we approach healthcare in this country is on a collision course with demography. We love our supposedly "private" healthcare system, but the private system is massively subsidized with public resources, to the tune of $210 billion a year in tax exemptions for employer-provided health insurance annually. The ACA made peace with that patchwork – Americans don't really understand how healthcare, or health insurance, works, and so it was deemed politically crucial to build on our Rube Goldberg system.

The cruel fact of the pre-ACA system was this: Americans could pay into the private insurance system all their lives via their employer, and get thrown off of it when they need it most. A few nights before the Supreme Court decision, I had dinner with an old friend who's on the verge of losing his health insurance under COBRA. He spent his whole life in corporate America, covered by insurance -- which, let's remember, is a form of compensation that's tax-protected by the government. Now self-employed, in his late 50s, he has a serious chronic but treatable medical condition, and he can't find an insurance policy that will cover it. It's astonishing to think that you can pay for private insurance for most of your adult life, rarely use it – but then those years of paying into the insurance system don't "count" when you need it. That's not insurance, that's legalized gambling with a preordained winner, subsidized by the federal government. Oh, and after you've paid into that private system your whole life, the government picks up the tab when you're most likely to get sick, after 65, with Medicare. What a racket.

By banning discrimination against people with preexisting conditions, the ACA made one outrage illegal. But look for the private insurance industry to come up with new ways to gouge and profiteer and game the system to insure the healthiest among us and maintain their profits, while consumer advocates and some in government scramble to catch up with them. This is the system that the ACA mandates that people participate in. To provide decent care to everyone while also getting a hold of skyrocketing healthcare costs, a single payer, "Medicare for all" system makes so much more sense. I'm not going to claim the votes ever existed for that; people are so afraid of slackers and moochers getting something they don't deserve, they ignore the way their own wages subsidize the private insurance industry.

So maybe we've got to approach it in this gradualist, piecemeal fashion. But now it's time for Democrats to begin spelling out exactly what the bill does -- Obama made a start in vivid, bullet-point remarks just after the ruling -- as well as calling the insurance industry out when it inevitably looks for ways to subvert the intent if not the letter of the law. As Obama noted, some insurance clients will be getting rebates soon, because their insurers already violated an ACA provision limiting how much they can spend on lobbyists and salaries and claims adjusters who work to deny claims, vs. actual patient care. That's huge. The president and his party need to trumpet every such ACA victory in the months to come. And so do those of us who wish the ACA had moved closer to single payer. Anyone who believes a Romney win in November brings us closer to Medicare for all probably thought there was no difference between Al Gore and George W. Bush 12 years ago.