John Roberts used bad reasoning in the healthcare case. But, thankfully, the damage is relatively minimal 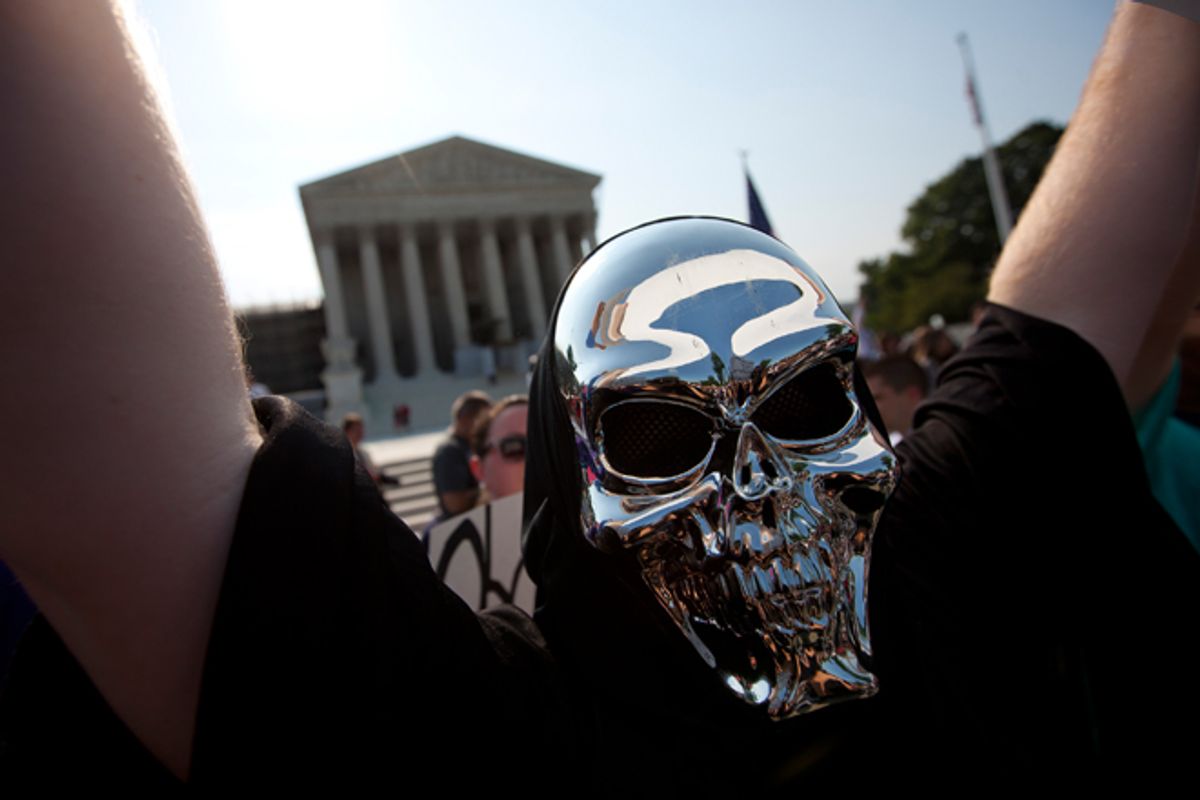 A demonstrator outside the Supreme Court on Thursday. (AP/Evan Vucci)
--

This morning, I was prepared to write about a humanitarian catastrophe – 30 million people deprived of their health insurance, chaos as the Supreme Court smashed a statutory scheme that had already become tightly integrated with a fifth of the American economy, all on the basis of terrible legal arguments. Terrible arguments did carry the day, but the damage is relatively minimal. So I’m just left to fret, in typical law professor fashion, about a poorly reasoned Supreme Court decision that is going to confuse courts in future cases. Chief Justice John Roberts wrote a lousy opinion, but on the big issues, he didn’t do much damage. (How much will depend on how badly Republican governors are willing to hurt the working poor in their own states in order to signal their disdain for Obama.)

Roberts accepted the argument that the power to regulate interstate commerce doesn’t empower Congress to mandate that everyone have health insurance. Those who go without insurance “are not currently engaged in any commercial activity involving health care, and that fact is fatal” to the Commerce Clause argument. But he then upheld the mandate as a tax, because it is only enforced by a monetary penalty withheld from tax refunds. The bottom line is that the mandate is upheld. And so is the rest of the statute.

The one provision that the Court invalidated was a provision saying that, if states did not comply with a massive expansion of Medicaid coverage, they could lose all their Medicaid funds. This, he held, unconstitutionally dragooned the states into the program, and so he invalidated that potential loss of funds, but not any other part of the program.

This is serious business. Before the Affordable Care Act, Medicaid was a patchwork of eligibility rules, in some states benefiting only a fraction of the poor. In Alabama in 2009, it covered only those with incomes below 11 percent of the federal poverty line, which was $2,245.50 a year for a family of four. The ACA expands eligibility to everyone with incomes below 133 percent of the poverty line, adding about 15 million people to the rolls.

From 2014 to 2016, the federal government will pay 100 percent of the costs. Then its share decreases, to 90 percent after 2020. Because the ACA also gives states assistance with their new administrative costs, overall state spending will actually be lowered.  In the litigation, however, 26 states claimed – and Roberts agreed -- that this conditional spending unconstitutionally coerced them. But let’s be clear: This is not about the states wanting to conserve their own money. It is about the states refusing to spend federal money, to help people that they do not want to help.  (Paul Clement, the attorney for the challenging states, declared in oral argument that his position would not change if the federal government permanently paid 100 percent of the costs.)

It is likely that many of these 26 states – Alabama is one of them -- will now accept Roberts’ invitation to refuse the additional Medicaid funds. The people in those states who do all the menial jobs on which everyone else depends won’t get the medical care they need after all, because the temptation to trash Obamacare will be irresistible. The big open question now is whether the Republicans suffer any political consequences for this. In my ideal world, working poor people with serious medical conditions will start sitting in on the front steps of Republican governors’ mansions, making clear to the press how these politicians are hurting innocent people. It probably won’t happen, but it should. (In fairness, they should also be sitting outside Roberts’ office as well, but it’s too late for him to undo the damage.)

That is the biggest news. I’ll conclude by saying a bit about the lawyers’ headaches that the court’s decision engenders.

Roberts upholds the mandate as a tax, but he also says that it is beyond Congress’s powers under the commerce power, because Congress may not regulate inactivity and, specifically, may not “compel individuals not engaged in commerce to purchase an unwanted product.” He thus introduces into constitutional law the new and previously unheard-of action/inaction distinction, which the challengers to the Act invented for just this occasion. The result is ironic. What was so nakedly political about the proposed new doctrine was that it had so little effect on existing law, and so would not really be much of a constraint on Congress in the future. It was the weapon of a bee: It stings and it dies. Now it’s part of constitutional doctrine – Randy Barnett is correct that the court accepted his arguments, and his views are now enshrined in Commerce Clause jurisprudence – but it doesn’t even sting. The court also, for the first time, imposed limits on Congress’s broad powers under the Necessary and Proper Clause, limits that are, again, wholly parasitic on Barnett’s arguments. But, once more, to no effect. The court continues a tradition of imposing limits on the Commerce power that are purely symbolic, without much real effect. Those limits may not even be the law: Justice Ginsburg, concurring, suggested that Roberts’ whole Commerce Clause discussion was dictum, unnecessary to the result and so without legal force. So the new limitation is about as weak as any the court could devise. It violates Occam’s Razor by pointlessly complicating constitutional law.

Roberts’ other innovation is his holding that the Medicaid expansion impermissibly pressures the states, because they have no real choice except to acquiesce in the expansion. Roberts thought that states should be able to participate in the old Medicaid program, which covered far fewer people, without joining the new one. This is likely to hurt a lot of innocent people, as I’ve already explained, but for lawyers it creates a puzzle: How does Roberts know that this is a new program, instead of just an expansion of an old one? And what sense are lower courts, which are supposed to get guidance from the Supreme Court, to make of this new distinction? How much must a program change before it becomes a new program? Justice Ruth Bader Ginsburg suggested that Congress could get around Roberts’ new restriction with a law abolishing Medicaid and simultaneously creating a new “Medicaid II” with the same bureaucratic structure but many more beneficiaries. The rule Roberts created isn’t coherent, and it will confuse courts for years.

But confused courts aren’t nearly as bad as sick and dead people. The most important thing Roberts did was deny a fifth vote to four of his colleagues who wanted to smash the entire statute. The extravagances of their joint opinion will be the subject of my next column.