Why Eric Holder was held in contempt of Congress

It's only partly about Fast and Furious 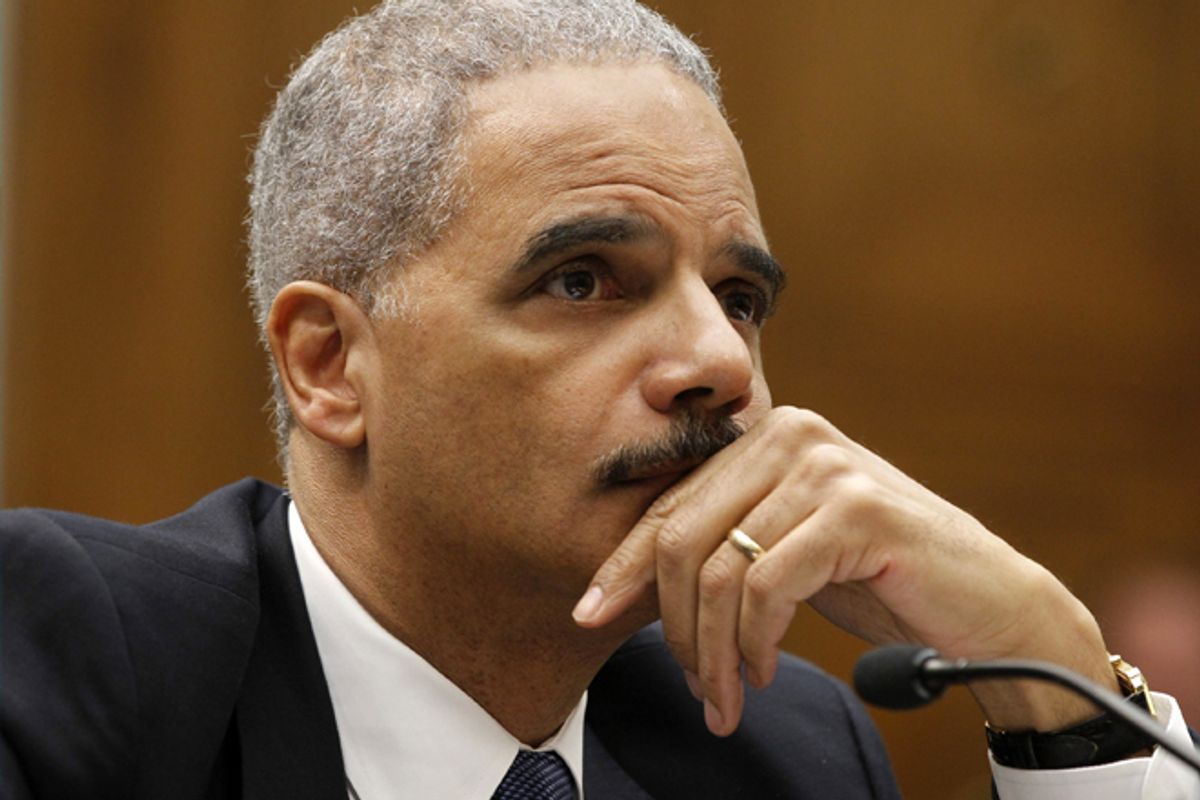 Attorney General Eric Holder has been held in contempt of Congress for three reasons: because he refused to release to House Republicans some documents related to "Fast and Furious," an ATF operation that did not go well; because Democrats were very mean to Attorneys General Ashcroft and Gonzales and Republicans are now attempting to win payback; and because Republicans intensely hate Attorney General Eric Holder, because he refuses to prosecute the New Black Panthers.

The NRA decided to "score" the vote, in order to put pressure on moderate Democratic members who represent gun-owning constituents to vote to hold Holder in contempt, and while most Democrats walked off the floor in protest, 17 of them voted yes. (One of the story's small ironies is that Republicans and the NRA are attacking Holder for the ATF's inability or refusal to arrest people who ... legally bought legal guns.) And now Holder becomes the nation's first attorney general to be held in contempt of Congress (another big first for Holder!), and the case has been referred to the U.S. attorney for the District of Columbia, who will probably just shake his head, or maybe lightly massage his temples, while declining to prosecute.

As I said, the simplest way to understand this is as elaborate payback for Democrats' investigation into the Bush administration's U.S. attorneys firing scandal, which led to White House counsel Harriet Myers and chief of staff Josh Bolten being held in contempt of Congress. Senate Democrats attempted to hold a (symbolic) vote of no confidence against Bush's Attorney General Alberto Gonzales, who repeatedly and blatantly lied to Congress, but they couldn't invoke cloture. It is also plainly the case that many conservatives loathe Holder and consider him to be, like Obama, a secret radical, intent, despite most evidence to the contrary, on rounding up whites and seizing their guns. (The Justice Department's decision to battle immigrant-harassment and voter ID laws are, obviously, just part one of Holder's lengthy plan to institute reparations and Shariah.)

But this particular vote was specifically supposed to be about "Fast and Furious," the Bureau of Alcohol, Tobacco and Firearms' utterly incompetent attempt to do something about the trail of guns from America to Mexico. The program was supposed to track the people hired by cartels to purchase guns on their behalf. It didn't really work, at all, and the guns made their way to Mexico. There is no evidence Holder knew anything about the operation until the rest of the country learned about it on the CBS Evening News. The documents Justice wishes to prevent from being released date to just after Republicans began repeatedly asking Holder to testify before Congress, and it is likely that they involve discussion regarding what to say in his testimonies. President Obama invoked executive privilege -- the first time he's done so during his first term -- on Holder's request, in order to stop the documents from being released, which is the sort of thing everyone used to get mad at Bush (and Clinton) about, though that one time Cheney tried to invoke executive privilege for himself was funnier. (Obviously the stupid documents should be released. All documents should be released, all the time.)

But while we're on the subject, did you read this big long Fortune piece on the Fast and Furious thing? It is ... unsurprising, basically, that a not particularly accurate version of events has become the mainstream press version and the official line, from the White House, which just wants this stupid thing to go away (even though no one outside of the Fox bubble cares much about it, so far).

The problem with stopping gun-running is that the gun purchases are completely legal and there is actually no federal law against arms trafficking. Seriously! If you're 18, you can go buy a gun right now and "walk" it across the border to Mexico or just give it to whomever you want. The ATF can't arrest you unless federal prosecutors give them permission and the prosecutors never give permission to arrest people for buying guns unless you can prove intent to give them to murderous cartels.

So if you can't arrest anyone for buying the guns, because buying the guns and giving them away is legal, then I guess you would think that maybe tracking the guns is your next best bet. But even the act of getting a wiretap takes forever for the ATF, which is the only domestic law enforcement agency conservatives don't think deserves an unlimited budget and completely unchecked powers.

Long story short, the gun that actually killed the Border Patrol agent was not "walked" anywhere -- agents were just not allowed to arrest the guy who bought it:

By the end of July 2010, the Fast and Furious investigation was largely complete. The agents had sent prosecutors 20 names for immediate indictment, Jaime Avila's among them. His purchase of the three WASR-10s were listed among his criminal acts. On Aug. 17, 2010, ATF agents met in Phoenix with prosecutors, including U.S. Attorney Dennis Burke. According to two people present, the ATF presented detailed evidence, including the fact that their suspects had purchased almost 2,000 guns, and pushed for indictments. A month later, on Sept. 17, an ATF team—this time including ATF director Kenneth Melson—met with prosecutors again and again pushed for action. The sides agreed to aim for indictments by October, according to one person in attendance.

But as weeks and then months passed, prosecutors did not issue indictments. The ATF agents grew increasingly concerned. By December, prosecutors had dropped Avila's name from the indictment list for what they deemed a lack of evidence.

In a world ruled by rational people, the Fast and Furious scandal would lead to a reconsideration of our nation's idiotic and endless drug war -- the reason the cartels have the money and the need to buy guns -- and the circumstances that led to Arizona becoming a massive discount outlet mall specializing in the weapons needs of paramilitary gangs in another country (maybe Mexico should build a fence). Not to mention the management, powers and responsibilities of the ATF, which seems not just incompetently run but also utterly lost in terms of its mandate. (It doesn't seem like they think they are allowed to do anything about guns, because to do so would make Republicans mad at them?)

Instead it's a big stupid pointless symbolic vote against an attorney general everyone is mad at for reasons they made up.