Mitt Romney is slamming Obamacare as a huge tax increase, but his Massachusetts mandate did the exact same thing 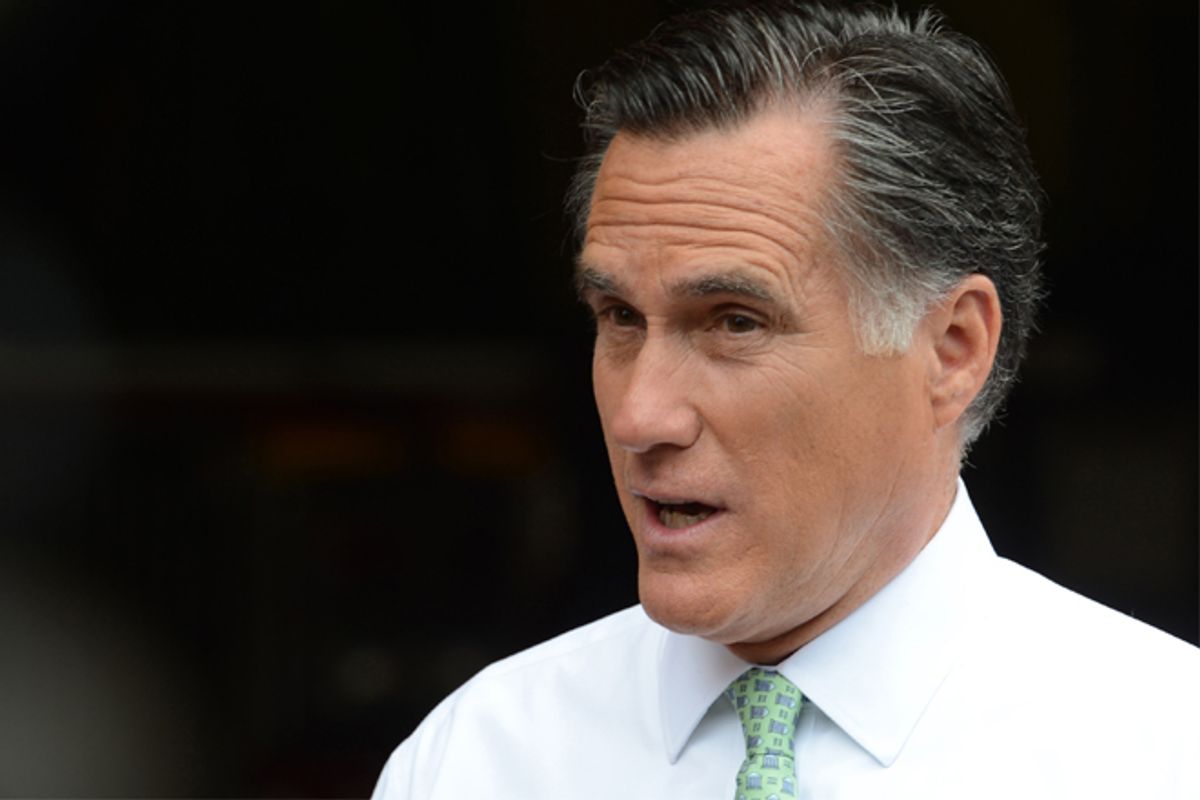 While Chief Justice John Roberts dealt Republicans a blow Thursday by upholding Obamacare, he also handed them a political weapon by designating the law's individual mandate a tax. "Obamacare raises taxes on the American people by approximately $500 billion," Mitt Romney said in his brief remarks responding to the court’s ruling yesterday.

One Romney adviser told the Huffington Post that the decision is actually a win for Republicans, at least in terms of messaging. "Frankly, to be able to tell you your taxes have been raised by this bill and you didn't know that, as opposed to trying to explain Congress's powers under the commerce clause, it's easier.”

The Republican National Committee has even mocked up a T-shirt on the tax issue, playing off Vice President Biden’s comments that health care reform is a BFD. The RNC’s shirt declares that Obamacare is “a BFTax.”

The problem here for Romney is that his health care law in Massachusetts did the exact same thing as the Roberts-tweaked version of Obamacare will do. The individual mandate Romney installed uses the same tax scheme to penalize free riders as the Affordable Care Act will, charging people who choose to not purchase health insurance a penalty through the tax code. And Romney himself has acknowledged as much -- many times.

In 2008, when Romney was running for president for the first time, ABC News host Charlie Gibson asked him during a New Hampshire debate, “Governor … you imposed tax penalties in Massachusetts?” Romney replied, “Yes, we said, look, if people can afford to buy it, either buy the insurance or pay your own way; don’t be free riders.” It was the same debate in which he infamously declared, “I like mandates.”

In 2006, Romney explained in a Powerpoint presentation how the state would enforce his mandate. “We will withhold any of their tax refund” for people who don’t purchase insurance, he said. The former governor said the same thing in a 2009 interview with CNN: "There are a number of ways to encourage people to get insurance, and what we did, we said 'you're going to lose a tax exemption if you don't have insurance.’”

In a way, Roberts forced the Obama administration to take Romney’s advice by swapping out the outright mandate with a tax scheme. In a 2009 op-ed in USA Today, Romney laid out some suggestions for President Obama to follow on health care. “First, we established incentives for those who were uninsured to buy insurance. Using tax penalties, as we did, or tax credits, as others have proposed, encourages 'free riders' to take responsibility for themselves rather than pass their medical costs on to others,” Romney wrote. That's exactly what Roberts upheld yesterday.

And the Obama campaign is quick to point out that while Romney and other Republicans are accusing the president of enacting a huge tax increase, the penalties under Romneycare are bigger than under Obamacare. According to a study from the Center for Health Law and Economics at the University of Massachusetts Medical School, forwarded to Salon by the Obama campaign, the differences are huge. An adult over the age of 27 who makes more than 300 percent of the poverty line (about $37,000 a year) and chooses not to purchase health insurance would pay at least $695 in penalties under Obamcare. Under Romneycare, that same person would pay at least $1,530 in penalties.

Jonathan Gruber, the MIT economist who helped design both Romneycare and Obamacare, said today on a conference call organized by the liberal Center for American Progress Action Fund that Obama's penalty will affect only a tiny portion of Americans. "The Congressional Budget Office estimates that about one percent of the population will end up paying this penalty. This not a broad new tax on the middle class. It is trivial. It is four, the CBO estimates it is $4 billion in revenues from this penalty. That is trivial relative to the almost $100 billion that you would get in [subsidies], once it’s phased in, in new tax credits to individuals to buy health insurance. So this is on net this an enormous tax cut for the middle class. This is not a tax increase,” he explained.

In the USA Today op-ed, Romney said his plan was affordable and reasonable. So if Obamacare’s penalties are even more modest, then the claim that it’s a huge tax increase rings a bit hollow.