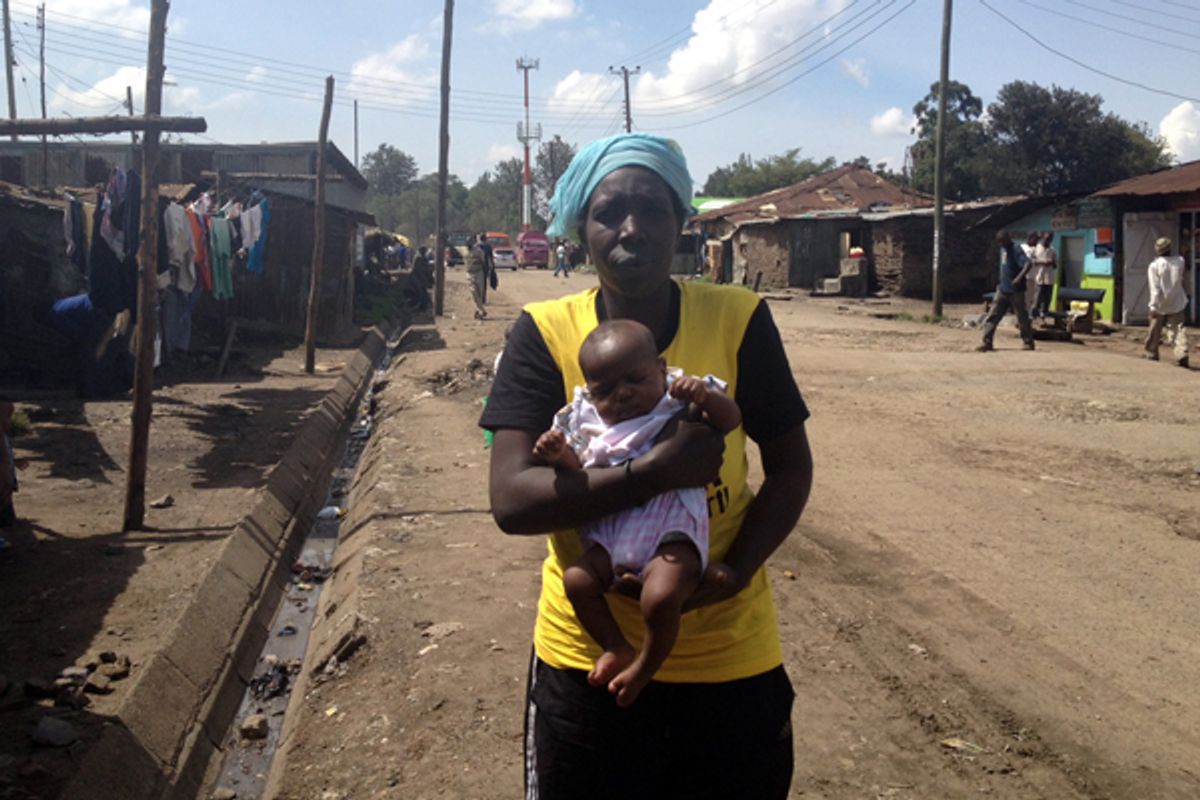 Maimouna, a Nairobi woman who says she was imprisoned in Pumwani hospital after being unable to pay for maternity care, outside her home.
--

NAIROBI -- Here is how Maimuna, 42, knows how many women and babies were detained with her in Pumwani hospital for being unable to pay for maternity care: “When we go to sleep, they count us, in the morning they count us, at lunch they count us.” So they don't run away, that is.

Maimuna (her nickname, at her request) says there were 62 of them imprisoned in a back room of the hospital, and two of the women had lost their babies. She herself was there for 21 days, sleeping on stools with babies stacked on a couple of beds nearby, alongside women who were detained for two or three months. They were all charged extra for every captive day they couldn’t pay. One woman, still bleeding from her cesarean but denied care, managed to wrangle some spirits from a security guard to try to clean her own wounds.

Sitting in the dark in her home in the slum of Majengo, Maimuna said, “There are so many women suffering in Pumwani.”

She should know: Four out of her six children were born there, including the one that came two months and three weeks ago, two years after her hospital detention. She felt she had nowhere else to go – at least, not that she could afford.

Only 43 percent of births in Kenya happen in a health facility (for reference, in 2009, 98.9 percent of births in the U.S. took place in a hospital). Meanwhile, Kenya’s last two demographic surveys, in 2003 and 2008, show a maternal mortality rate that is either stagnant or slightly worsening -- most recently, 488 maternal deaths for every 100,000 births. The two statistics are intricately linked: Among the women who can even access health facilities, usually in cities, cost is a barrier, one that mounts if you can’t immediately pay and are detained. So is fear of mistreatment or dangerous conditions, particularly for those going to public facilities like Pumwani, which is currently run by the city council of Nairobi. Anyone who can afford it goes to a private birthing center or hospital.

Reports of abuses and detention at Pumwani are by now cyclical in Kenyan media, ranging from unsafe conditions, mistreatment at the hands of medical staff, and even rampant trafficking of babies. In 2004, a UK-based pastor, Gilbert Deya, was accused of having stolen five Kenyan babies, at least one of them from Pumwani, and allegedly convinced infertile women they were “miracle babies.” (Last fall, Britain agreed to extradite him to Kenya.) In May 2009, according to the Guardian, “a local television station used a hidden camera to show how 44 new mothers were being held in a locked room at the Kenyatta National hospital.”

But justice is slow, and no one I spoke to, whether frequent patient or reproductive health advocate, believed anything had changed after a government task force report issued in August 2011. Maimuna is one of several women working with the attorneys at the Center for Reproductive Rights’ Nairobi office in hopes of building a case; the 2010 Kenyan constitution enumerates a right to health and to be free from degrading treatment.

Though Pumwani has a special infamy as the largest maternity hospital in the country, it’s not alone, according to a 2007 report by the Federation of Women Lawyers-Kenya and the Center for Reproductive Rights. Detention of postpartum women has been well-documented at Kenyatta National Hospital, one of the largest hospitals in the region, as has disrespectful or downright dangerous treatment of birthing mothers, across the country. One woman, referred to as Regina in the 2007 report, said of the operating room at Siaya Medical District Hospital, “I remember I was the only one who came from the theatre alive ... In fact, you would come from the theatre and hear nurses say, ‘We know no patient of [the doctor] survives.’” After her cesarean, according to the report, Regina discovered a rusty blade had been left in her uterus.

Margaret A., 35, has delivered four out of her five children at Pumwani, including a breech birth requiring a cesarean in November 2010. When she didn’t have the deposit to be admitted, she told Salon, she was told to lie on the floor and wait. Eventually, she says, a female doctor took pity on her. A day after her cesarean, she says the staff forced her to get out of bed and sleep on the floor, all the time berating her -- “Why do you open your legs and give birth every time?” She suffered a bladder rupture, for which she needed further surgery.

Both Margaret and Maimuna saw plenty to lead them to believe that at Pumwani, baby-trafficking isn’t a thing of the past. Maimuna said she was passing through that ground-floor ward on her way to do laundry with other mothers when she heard a woman screaming that she was being shown a dead baby boy when she’d given birth to a girl. “Both the dead babies that day were boys,” Maimuna told me – she knew, because everyone sees them.

Margaret recalled that when she was last admitted, a woman was told her baby had died, but when her husband demanded to see the baby’s body, its skin was peeling, indicating a much older corpse. She said she knew of single mothers who have been offered by nurses 50,000 shillings (about $600) in exchange for their babies. (Dr. Omondi Kumba did not respond to follow-up questions regarding baby trafficking.)

Detaining women and babies for failing to pay medical bills compounds the fact that the hospital is notoriously understaffed; when I visited Pumwani last week as part of a group of journalists brought to Kenya by the International Reporting Project, the doctor in charge, Omondi Kumba, told us that there are 180 nurses on staff where 250 are needed. And, he complained, the Nairobi city government doesn't give them the necessary funding.

At Pumwani, the sticker price is 6,000 shillings ($71) for cesarean and 3,000 shillings ($35) for a normal birth, far less than other hospitals. (The cost-sharing in Kenyan hospitals was first implemented per World Bank recommendations in 1989. While the World Bank has backed away from the model, out-of-pocket contributions are the norm in Kenya even when certain services, such as contraceptives, are officially supposed to be free.) But the cheap upfront cost is deceptive, Maimuna points out: “Pumwani is the cheapest one and it is the expensive one.” In practice, even women who aren’t detained pay far more: They have to pay, item by item, for basic medical supplies, from gloves and syringes to disinfectant – or potentially go without. It’s up to a social worker to decide whether a woman has the ability to pay or should have a waiver; Kumba said about a million shillings get waived annually, not much solace to the women who are detained. Many of them get out when a charity decides to bail out all the women or a politician gets involved; the coming months -- election season -- are expected to be good for women who can't pay their medical bills.

When I went to Pumwani, I had no idea we were walking through Kenya’s most notorious hospital. I can say that the staff’s responses to our questions as we were shuffled in and out were at best shifty and that very little effort was made to accord the women any privacy in our presence. We were reluctantly herded through a narrow passageway of mostly nude women breast-feeding their preemies in a heated unit and then led by a doctor through an examination room that was in use, with a clothed woman curled up, her face to the wall. (Kumba had told us several times not to put photos of the “naked women” on the Internet, and I still don’t know if he was joking. I didn’t take any photographs of the women at Pumwani.)

I did know enough by then to ask about detention of pregnant women, though I now wish I’d known more. Kumba said, sounding regretful, that detention of pregnant women is against the law and doesn’t happen. A few minutes later, I asked the nurse leading our tour where the detained women were, were they together or separate from the paying customers, and she paused for a minute and said that no, they were all together. Kumba didn't respond to follow-up questions by email.

Several people who have watched the near-annual scandals at the hospital hope that a pending reorganization that could put Pumwani under new county control could make a difference. In the meantime, all the laws and task forces in the world don't seem to have done much for women like Maimuna.

“It hasn’t changed anything,” she said. “Pumwani doesn’t change.”