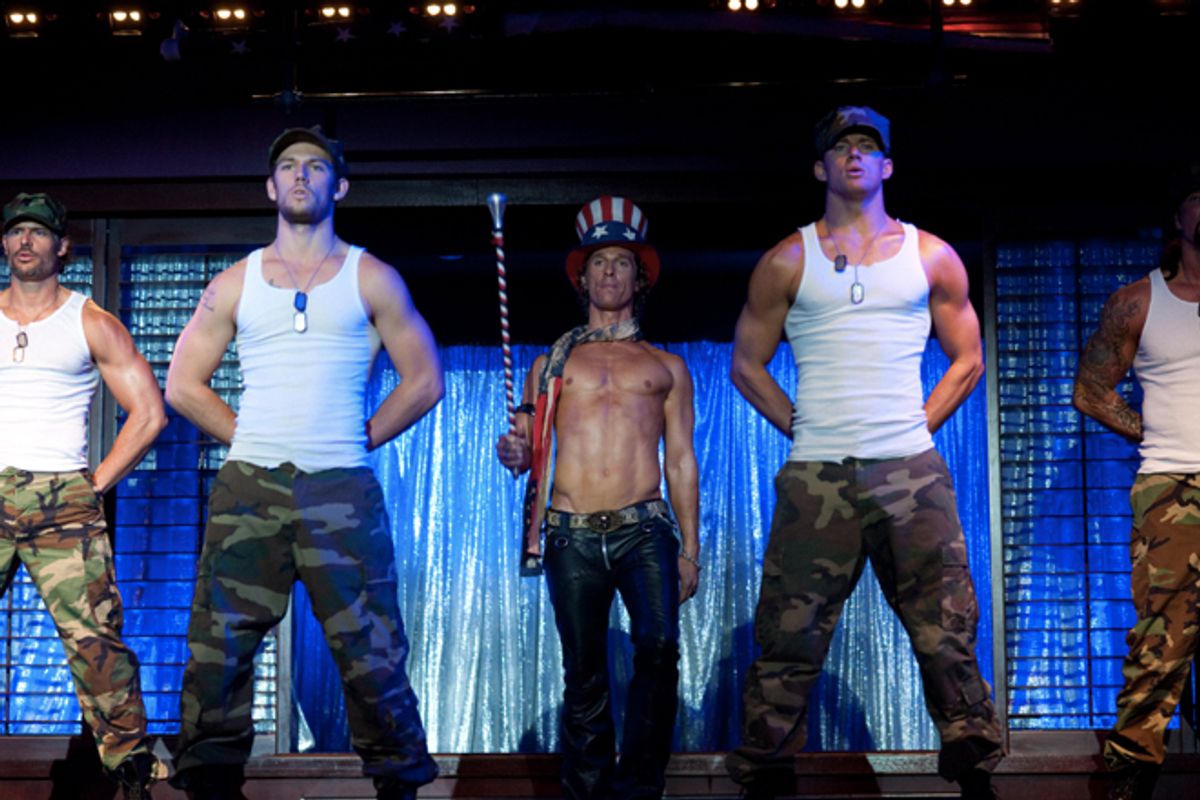 Onstage was an overly tanned dark-and-handsome type dressed like a race car driver. He slowly unzipped his onesie while popping his knee to the throbbing techno music, which was accented by sounds of a car engine revving. Once naked, he took his flaccid penis in his hand, stretched it out as far as he could and let go; it snapped back to his body and flopped around as he wiggled his eyebrows at the crowd.

That was the first time I went to a male strip club -- and the last. Obviously.

But then came "Magic Mike," a new movie starring a mouthwatering array of maleness: Channing Tatum, Matthew McConaughey, promising newcomer Alex Pettyfer and that hot, perpetually shirtless werewolf from "True Blood." Ever the optimist about the potential of male stripping to be sexy, I allowed myself to believe -- against all prior evidence of banana hammocks to the contrary -- that this movie would get it right.

Well, having attended a screening earlier this week, I can tell you that the movie gets a great many things right, but male stripping isn’t one of them -- and of course not! It simply shows male stripping as it so often is: goofball, absurd and sometimes repulsive. That raises what is surely the most critical question of our time: Why is female-oriented male stripping so often unsexy? Why is it so prone to eliciting women’s laughs or cringes?

This isn't something that has garnered research attention. So, warning: speculation ahead.

When I posed my question about the unsexiness of male stripping on Twitter, a couple of women blamed it on basic male anatomy. “Floppiness is funny,” said one. “A man's flaccid penis? Floppy.” Echoed another: “Because males are only disallowed from showing ONE BODY PART in daily life ... and that one is, well ... floppy?” Allow me to counter, however, that when Channing Tatum's penis ever-so-briefly flashed on-screen -- during a bedroom scene, not a stripping routine -- there was a sharp intake of breath in the theater, followed by female shrieks of sheer delight. It also has to be pointed out that most male stripping routines achieve absurdity long before any g-strings hit the floor. What accounts for the pre-floppiness hilarity, huh?

According to some researchers, it might be something more fundamental about how heterosexual women view the male body as a whole (after all, gay male culture often enthusiastically embraces half-naked male dancers). Meredith Chivers, a researcher and professor at Queen's University, found that heterosexual women showed no arousal response -- neither physically nor subjectively -- to nude guys working out. Their response to these exercising fellas was comparable to their reaction to footage of a mountainscape. (Heterosexual men, however, responded to footage of nude female exercisers, as did gay men to images of naked males exercising.)

There's also a theory that straight women are most aroused by demonstrations of men’s desire. (Look at me, just tossing out theories like dollar bills here. I’m making it rain ideas.) According to that hypothesis, male strippers may be just a bit too in need of being desired, rather than doing the desiring. On a similar note, Susannah Breslin, a journalist who’s written about male sexuality and the porn industry, tweeted in response to my call: “Men objectifying themselves is feminizing.” And maybe parody is a means of remasculinizing it. Donning a patently ridiculous American flag thong (as they do in “Magic Mike”), turning it into comedy, could be a way of taking some power back. You see a similar thing at work with the playfulness of burlesque.

Maybe instead of asking why male stripping is funny, we should ask why we laugh. The act of a man taking his clothes off for women’s money breaks major gender norms, which might produce anxiety — and anxiety makes us prone to laughter, argues Adam Safron, a researcher who has studied neuroscience and human sexuality for over a decade. Anxious laughter in this case could also manifest for different reasons: “If women are ambivalent towards their feelings of desire for men, possibly due to internalized societal expectations/proscriptions, then partially dismissing male strippers could allow them to deal with this ambivalence,” Safron argues. That “gives women plausible deniability for their potential feelings of attraction/arousal,” he says.

Similarly, Amanda Klimczuk, a researcher at the Institute for Mind and Biology, tells me, “It’s seen as something ‘naughty’ — like eating ice cream right out of the carton — so doing it with friends may be pleasurable, but may also instill giddiness because they’re all doing something ‘taboo’ together.”

The ever-popular evo-psych take would be that stripping doesn’t allow men to demonstrate their “mate value,” and thus is unattractive to ladies. The ability to take off your clothes while keeping a beat doesn’t efficiently convey abilities as a provider or protector -- except to stylishly high-kick predators in the face, I suppose. (That might explain why rock stars are so lusted after: They shimmy around onstage too, but their position conveys more power, prestige and desirability.) Besides, recent research has demonstrated just how complicated and mysterious women's desire can be: If scientists can't figure it out, it's no wonder male strippers haven't.

You could also point to women’s lesser interest in casual sex partners. That being assumed, “we could say that the demand for sexually available women (or at the very least, women who provide an illusion of availability) is higher than the demand for sexually available men,” Safron tells me in an email. “Thus, we should expect there to be a larger market for female than male strippers.”

Kim Wallen, a researcher at Emory University who has studied primate sexual behavior, argues that fertility cycles might be relevant. "Men are continuously fertile and women are cyclically fertile and sexual desire correlates with fertility in both sexes, being higher when fertile," he said in an email. "The cyclic nature of women's sexual desire (combined with the use of oral contraceptives, which dampen sexual desire) means that if a group of women go to a strip club, a good proportion of them are likely not fertile and also likely not intensely interested in males at the moment."