Save the Supreme Court

Now that Obamacare has been upheld, liberals should stop demanding that the Court needs "fixing" 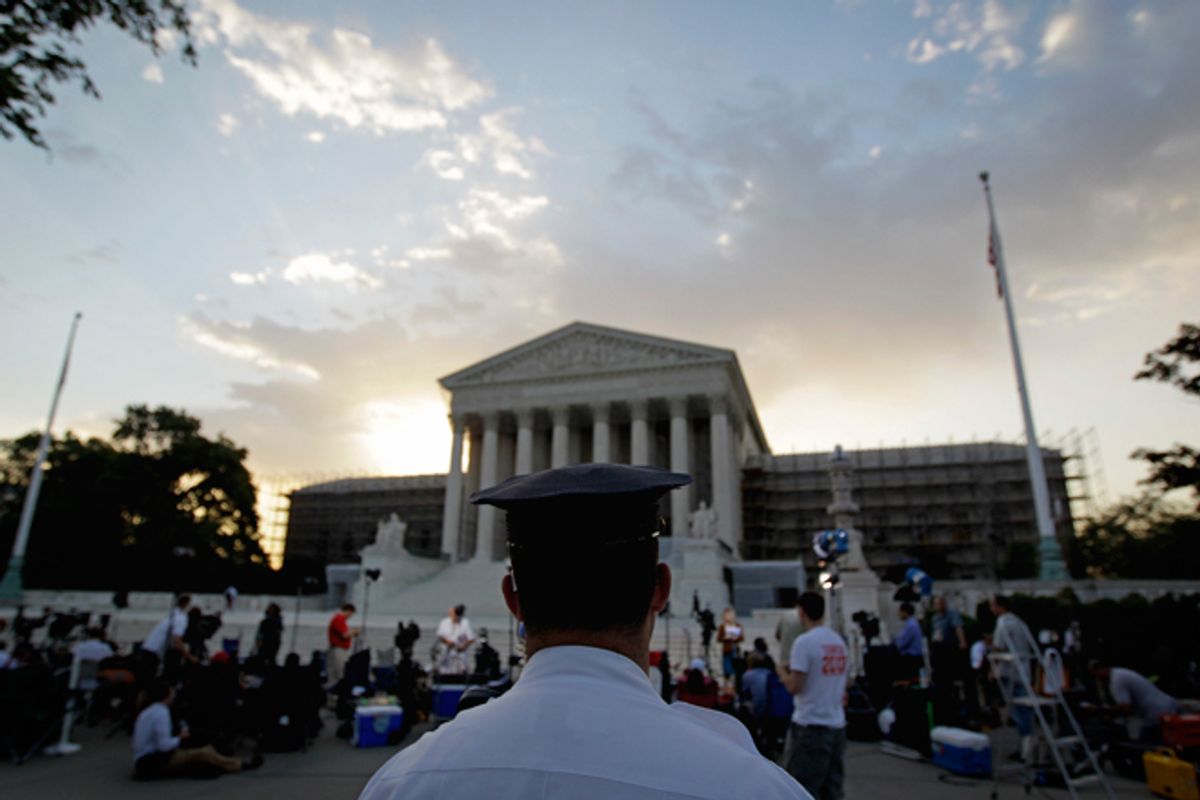 An officer stands outside the Supreme Court as media and the public gather on Thursday. (AP/David Goldman)
--

The ACA survived the Supreme Court. But that’s not going to change what a lot of liberals had been saying in the run-up to the final decision: it’s time for some serious Supreme Court reform. They’re wrong, and here’s why.

It used to be conservatives who loved rhetoric about unelected, unaccountable judges and concocted schemes for limiting the Court’s influence. In fact, that impulse is fully alive among some Republicans – Newt Gingrich ran on a platform that included paring back the Court’s jurisdiction. But despite a few results at the end of the term that left liberals relieved, there’s little question that, Newt notwithstanding, this is a conservative court and has been for some time. After all, it’s generally the case that at the end of the term these days liberals worry about what damage the Court might do, not hope that they’ll expand (what liberals see as) freedom.

The result has been, as Ross Douthat noted this week, that liberals have discovered the virtues of Supreme Court reform. Perhaps the most regularly aired proposal is for term limits for the Justices; the most popular version seems to be 18 year terms, so that there’s a new opening every other year. But Douthat has found a few others as well. I don’t think this is in most cases a deliberate plot to weaken a branch of government thwarting liberal plans; it’s more likely that when you’re upset about any institution, it’s easy to become very aware of the problems with that institution.

So: is this really where liberals should be?

The first reason is simply practical. Any political party or set of groups has limited resources; pushing for one thing will prevent pushing for something else. In this case, a campaign to “reform” – that is, weaken – the Court would take resources away from substantive issues, whether it’s health care or climate or income inequality or something else.

Now, that would be different if there was a systematic reason to believe that the Court had a long-term structural bias against liberals. That can happen; the Congressional seniority system of the twentieth century, for example, strongly tended to produce conservative results because conservative Democrats from the one-party South of the era could stay in office forever and therefore rose to the top of committee after committee. But there’s really no reason to believe that. Today’s conservative Court is simply a reflection of, basically, that there have been a few more years of Republican presidents over the last three decades. If we’re now in a run of 12 years of Democratic presidents, it would almost certainly end with a solid Democratic majority on the courts, one that would persist through quite a few years of Republican presidents.

The deeper reason, however, that liberals should steer clear of any proposals to weaken the Supreme Court, and the judicial system more broadly, depends on a full understanding of the Madisonian system of what Richard Neustadt correctly called a system of “separated institutions sharing power.” We’re used to think of that system in negative terms, as Madison suggested in Federalist 51: it’s all about the veto points, about how each institution prevents the others from getting anything done.

But while that can be true, it can also be entirely backwards. Ambition, Madison tells us, collides with other ambition – but that means there’s a whole lot of ambition percolating in the system overall, which in turn means that Madisonian government creates power in the first place. Not just “energy in the executive” – but energy too in the House, the Senate, the bureaucracy and, yes, the courts. All those politicians (including the politicians in judicial robes) who want to make a name for themselves. The way that you do that isn’t to give away influence; it’s to try to maximize one’s influence. And in a democracy, even the unelected do that by trying to solve problems and by building up their own little institutional ground into something that can solve problems. Which means an entire government that, by its very nature and design, searches for problems to solve and tries to solve them. And what could be better for liberals than that?
Of course, all of the checking and balancing tends to frustrate everyone, especially liberals. But focusing on that, and not what the institutions of the American government can produce, is the wrong reaction. If anything, liberals should focus on strengthening each institution, allowing them to reach their full potential. Yes, that also means that sometimes conservatives will wind up with control of those institutions and harness their power for conservative goals, but overall a government with expanded capacity, if not always a government that takes advantage of that capacity is what liberals should want.