The idea of a student debt strike is circulating among activists -- could it take off? 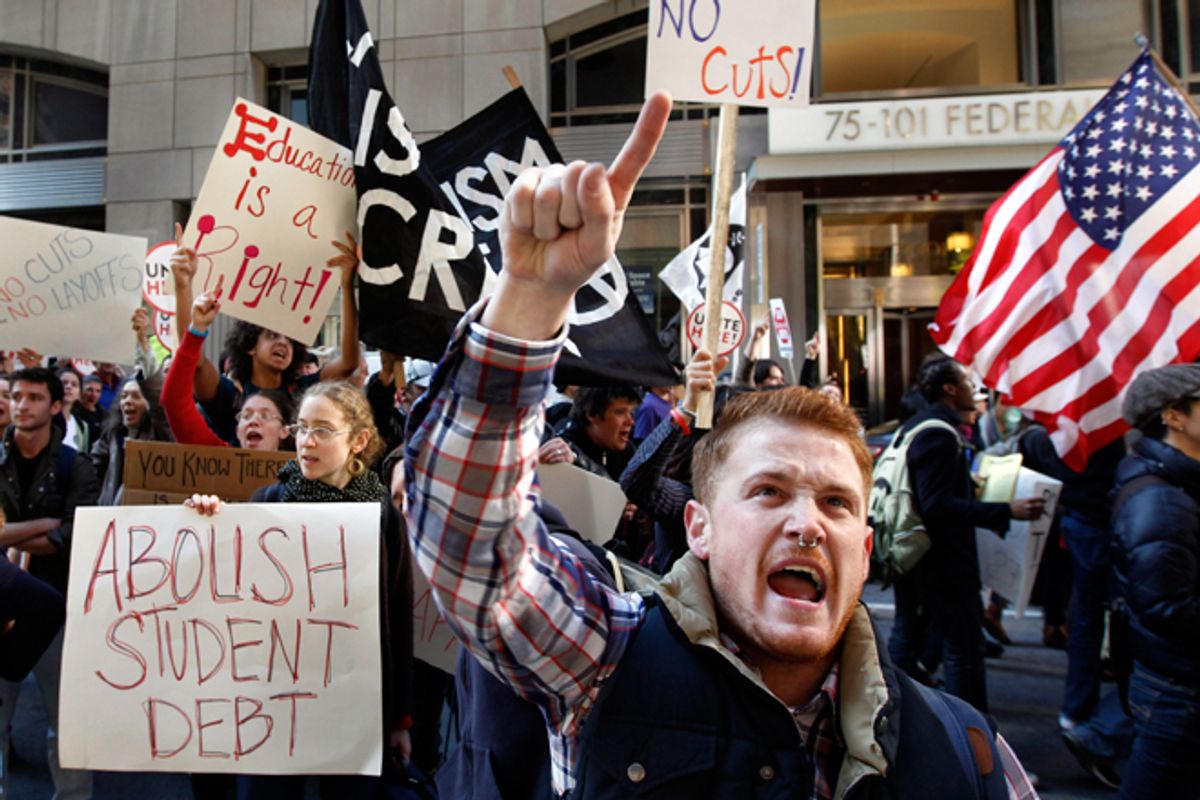 As Salon’s Andrew Leonard reported, Senate leaders reached a compromise Tuesday to ensure that government-backed student loan interest rates would not double come July. Owing to this compromise, he noted, “You can scratch student loan debt off the presidential campaign whiteboard.”

And indeed, he’s correct. The White House, Congress and the Romney campaign were all keen to keep the student loan rates capped at 3.4 percent for now (just 34 times higher than the rate at which banks can borrow from the Fed), rather than doubling them to 6.8 percent. But student debt – now a ticked box on 2012 campaign agendas -- looms as a growing focus for political activism and organized dissent around the country. Congress may have managed to strike a deal, but students, activists and allies are starting to talk seriously about a debt strike.

“Emerging out of social movements of the past year or so, we’re starting to realize that the only way to get action on debt is to start to talk about refusal,” Nick Mirzoeff, New York University professor of media, culture and communication and longtime Occupy participant, told Salon.

A student debt strike campaign surfaced within the first few months of the Occupy movement’s swell but gained only moderate traction and did not lead to collective acts of default. Now, however, the idea of student debt activism, particularly in the form of debt refusal, is gaining ground again. Instead of petitioning lawmakers for debt forgiveness, organizing for collective debt refusal – a debt strike – would be a bold attempt to force debt abolition. Crystallized in a slogan, the thought is, “Can’t Pay, Won’t Pay,” and, more radically still, just “Won’t pay."

“There have been repeated debt forgiveness movements. And all of these initiatives always fail,” explained Mirzoeff, who has advocated for debt refusal repeatedly on his popular Occupy 2012 blog.

Mirzoeff noted a current, presumably doomed forgiveness petition, which has garnered over 1 million signatures, to ask Congress to pass Michigan Democrat Hansen Clarke’s Student Loan Forgiveness Act. It is thought to have a “1 percent chance of success," he said. Unlike asking forgiveness, debt refusal aligns itself with the Occupy (and historically anarchistic) mode of direct action. There’s no blueprint for a debt strike like this, but broadly the idea would be that a large mass of debtors together resist the burden of crushing debt, striking out at banks by refusing to pay, and building support networks to help absorb the harsh consequences of default. Weekly assemblies dedicated to connecting debtors and beginning these conversations have now convened four times in New York’s Washington Square Park under the banner "Strike Debt," emphasizing that an active blow needs to be delivered.

In the past year there have been numerous thorough expositions of the student debt crisis. The statistics are now widely known and cited: The national student debt has topped $1 trillion; there are a reported million-plus students who owe over $100,000; the default rate on student loans has risen, according to Department of Education data, to nearly 9 percent of all borrowers (15 percent of borrowers at for-profit colleges). Since last September, Occupy provided spaces and forums for individuals to create a shared, visceral engagement with these statistics. Personal struggles with debt (be it student, medical, mortgage or credit card) were discussed in assemblies and scrawled on protest signs.

“There was a real sense of coming out of the shadows and finding other people who were facing the same problems,” said Mike Andrews, a Brooklyn, N.Y., writer, editor and OWS stalwart, describing a recent “debt speakout” session. “I think there's a lot of potential for organizing and agitating around debt. It's almost universal -- nearly everyone has some form of debt -- yet we all confront it in isolation, as individuals instead of a collective or a class. This atomization needs to be broken.”

The potential Andrews and others see for organizing around debt is particularly strong when it comes to student debt – not least because of the ongoing actions of striking Quebecois students and their supporters. Students and faculty members began striking in February, effectively shutting down their universities, in response to planned tuition hikes. Since then, hundreds of thousands of supporters have regularly swarmed the streets of Montreal to protest draconian government responses to the strikes and to call for free education. In New York, Chicago and Oakland, solidarity marches snaked unpermitted through city streets since May. As I wrote following one such solidarity march in New York last month, “It goes without saying that if there are grounds for radical student action anywhere, they are in the U.S. We — students and non-students alike — are ‘in the red’ as much as and more than our neighbors to the north.” And the radical idea now circulating is that of debt strike.

The harsh penalties for missing debt payments, let alone defaulting, on student loans are obvious obstacles in organizing a mass debt strike. Student debt particularly – as it is inescapable through bankruptcy and never expires – can dog you for life. Choosing to default, especially for those who are struggling but managing to make loan payments, is a terrifying prospect.

As with any idea of strike, a student debt strike thus presents itself like a prisoner’s dilemma – if everyone did it, then it would likely work, but in fear that most people won’t do it, no one does. Understandably, then, organizers and agitators now are focusing on bringing debtors together and forging affinities to make collective debt refusal seem even possible. Importantly, as rises in tuition fees continue to vastly outpace inflation, and unemployment remains high, student debt default is an inevitable fact of life for more and more people. “Since defaults are going to happen in large numbers anyway, you can politicize the process by doing it as a conscious collective act,” said writer and New Inquiry editor Malcolm Harris, who has written at length about student debt.

“I’m on strike right now,” said Amin Husain, a former highly paid lawyer who left his corporate practice in a bid for happiness and now works on education projects in Palestine, where he grew up. Even as a well-paid lawyer, Husain could not pay off his large law school debts while supporting his family in Palestine, and has now reframed his inability to make loan payments. “I’m very poor, I don’t have healthcare and I used to worry about it all the time. At a certain point, I just thought, ‘Fuck you’.”

Husain emphasizes the importance of demystifying the consequences of student debt default. “The maintenance of this debt system relies on a form of intimidation – people fear the possible hurt of forgoing a credit score.” And indeed the very real consequences of default include the inability to get a lease on a rental, the hounding from collection agencies that can even garnish future wages, Social Security payments and unemployment benefits. But equally real is the crushing burden and poverty that often comes with trying to fulfill extortionate student debt obligations.

“The idea at this stage is to start to get people who are debtors to realize that they are not necessarily beholden to this for the rest of their lives,” explained Mirzoeff, “so many people are already pushed over the line into default anyway. The idea is to allow people to claim that and not be destroyed by it.”

At present, debt refusal holds appeal for militant anti-capitalists and reformist liberals alike. A jubilee on student debt would, within a liberal framework, potentially function as massive stimulus injection -- young people previously impoverished by student debt could instead buy cars, houses and other economy-fueling commodities. Meanwhile, for radicals, the idea of a student debt strike has the potential to blow a hole in neo-liberal assumptions about personal debt and obligation and possibly forcing an entire rethinking of how we structure education.

In the coming weeks and months, student and other debt activism will likely continue to consist of assemblies and marches themed around debt, much like the zombie-themed “Night of the Living Debt” street march of several hundred people through New York’s West Village last Friday (a playful spectacle to suggest that student debt is as pervasive and life-destroying as a zombie virus). All the while, the numbers of individuals rethinking loan default as a mode of strike and anti-capitalist resistance are growing. The idea of collective debt refusal is cemented in the radical political agenda, even if the electoral horse race considers student loans a cleared hurdle for 2012.