Hit me with your vest shot: Weiner pokes fun at Eugenides ad 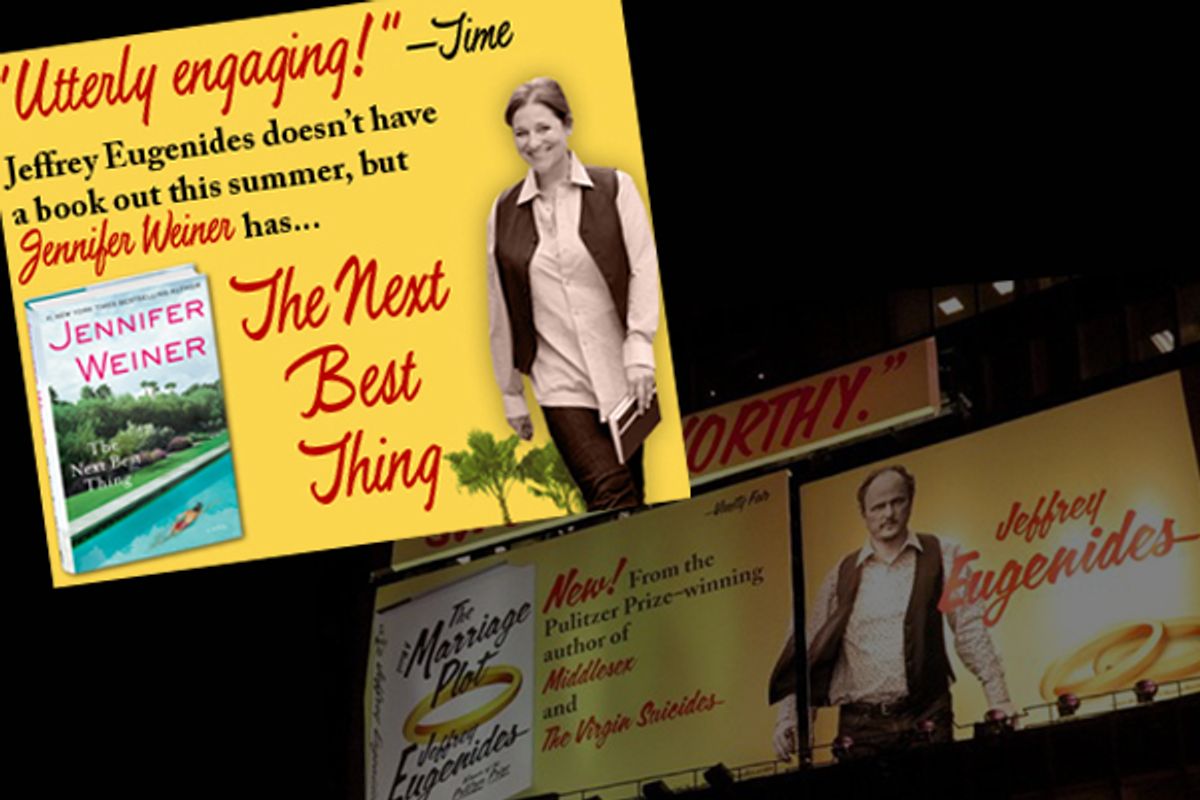 Best-selling author and Twitter-whirlwind Jennifer Weiner has launched a very funny online campaign for her new book, "The Next Best Thing." Weiner appears in a vest reminiscent of the one novelist Jeffrey Eugenides sported on a Times Square billboard advertising "The Marriage Plot" last summer. A billboard, one might recall, that astonished tourists and readers alike with its portrayal of a literary writer as a macho figure. (The words “swoon-worthy” appeared above the billboard, and we know they were talking about the book, but still.)  The vest led to numerous humorous online discussions as well as, naturally, the creation of the @eugenidesvest Twitter account.

“Jeffrey Eugenides doesn’t have a book out this summer,” says the ad, “but Jennifer Weiner has 'The Next Best Thing.'”

On the one hand, the campaign is pretty insidery, perhaps targeted only at those readers who spend half their life on Twitter and obsess about things such as which authors are getting a Times Square billboard and which are not.

Then again, who cares if it’s insidery? It’s freaking hilarious, which is a tough thing to accomplish in the world of publishing, where most ad campaigns are dry and look exactly the same. Weiner even pulls off the vest, and that’s also hard to do, because vests aren’t for everyone.

Weiner answered a few questions via email. (Full disclosure: She recently put my forthcoming book on a summer reading list on her blog.)

What was the genesis of this vest campaign? I believe you tweeted about taking some pictures in the spring, but how far back did you decide you were going to do this? Did you see the vest last year and picture yourself in it immediately?

The vest and I have had a slow evolution. When I first saw the billboard, I thought, “That’s kinda goofy.” (Not the vest so much, but the paisley shirt, and the whole Marlboro-man vibe – and I should add here that I am huge fan of Jeffrey Eugenides, and think all the praise and prizes he’s gotten are incredibly well-deserved.) But I also thought, “That’s kinda different …” And different is smart. It feels like so much of publicizing and marketing books is still the same-old, same-old – “We’ll send it to Time, we’ll buy an ad in the New York Times, we’ll cross our fingers and hope for the best.” I thought the billboard was brilliant because it was different … and then I came up with the idea of a spoof. The title of my book, "The Next Best Thing," lent itself perfectly to the idea. After some initial skepticism, my publisher was totally behind this campaign.

The concern at Atria was, “OK, it’s funny, but it’s way too inside baseball.” So we decided to go with a more conventional billboard in Times Square – pretty picture of me, pretty picture of the book – and use the spoof board on the very literary sites.

Now you've got your own billboard in Times Square! Is this your first? Did you insist on one after Jeffrey Eugenides had his?

This is my first billboard! Every girl’s dream! And, while I certainly did not insist on it (I don’t insist on anything; I ask nicely), over the past few years, since everyone and her sister got an e-reader, there’s been an ongoing discussion as to the best ways to bring books to readers’ attention. I’ve done “announcement ads” in the Times, but so many people read the paper on iPads now, it felt like those lost their oomph. I’ve bought ads in People (and did them for this publication), but again, people read that on devices, too. I’ve done TV ads, which were incredibly expensive to arrange and produce, and it’s hard to know if they’re working or not. Billboards feel like they’re right in your face. You can’t miss them – you can’t TiVo past them, you can’t fast-forward through them – so I’m hoping that this campaign works!

Where did you get the vest? Did you feel sexy in the vest?

The vest came from the clearance rack at Men’s Wearhouse in Philadelphia. I’m not sure I felt sexy in it, but I did feel sort of … superhero-y? Powerful! Also, I kept thinking of the “See My Vest” song from “The Simpsons,” itself a spoof of “Be Our Guest” from “Beauty and the Beast.” It was neat. I highly recommend it.

So much of publishing advertising and marketing feels the same after a while -- it's incredibly difficult to stand out in a crowd. I think it might have something to do with the sheer quantity of books that are being published. Can you talk just a bit about how much participation you have in the marketing of your books?

It’s funny -- when I was at BEA [BookExpo America] I met a woman who was on the Atria marketing team when I first came in there in the spring of 2000, when "Good in Bed" was on the market. She said she remembered how specific my vision was: That I wanted to talk about covers, and tours, and branding (hateful word, but there you go), and what my career was going to look like. And I was staring at her, thinking, I don’t remember any of this!

But, having said that, I was 30 years old when I sold my first book. I’d been a pop-culture reporter at the Philadelphia Inquirer for five years, and I’d definitely paid attention to the way books (and, really, all entertainment) was packaged and marketed and sold. I knew I wanted to have an active role in the way my books went to market. The world of publishing was already starting to change, and new writers – particularly, new commercial writers – didn’t have the luxury of handing in a book and saying, “Here is my latest work of genius, I am now returning to Mt. Olympus (or New Hampshire) to contemplate my next.”

I remember reading somewhere that you should write the book you wanted to read. So I wrote a book about an unapologetically Jewish, unapologetically plus-size heroine. I gave her a mom who’d come out of the closet and a father who’d dropped out of her life, and a boyfriend who was a lot like Satan -- and I gave her a happy ending.

Then I worked my tail off, getting the next book ready, and getting the word out about "Good in Bed," because I believed then, and still believe, that nobody will ever love your book more or, hence, work harder on its behalf, than you, the author. I had a lovely publicist, but I knew that I was one of a dozen books she was dealing with that spring. And, because of what I’d seen and learned at the paper (and because I had all of this secret guilt about how I’d conned Simon & Schuster into paying a lot of money for a book that would only be interesting to 12 people, six of whom I’d know from Weight Watchers), I wanted to help as much as I could.

I had a website designed, in a day when that was a pretty new thing. I had postcards made, and I mailed them to every group or individual or plus-size clothing store or swim club that I thought might be interested in my story. I went on the Dread First Tour – the one where one person shows up, and you do your whole song and dance, and then say, with a friendly smile, “Can I sign a book for you?” only to hear, “I think I’ll ask my library to order it.” I hired an outside publicist, and then fired her when it turned out the books she said she’d mailed were still languishing on her office floor. I visited book clubs, and Sisterhood meetings. I had T-shirts made that read “I GOT GOOD IN BED: DID YOU?” and convinced my Nanna to wear it to the beach in Boca. In short, I did everything I could to help the book find its place in the world … and, eventually, it did.

What I find fascinating about all of your creative output, be it essays or tweets or books or ad campaigns, is how perfectly consistent it is and entirely specific to your voice. Do you have any sort of philosophy about personal branding/marketing, or do you just go with your gut?

My philosophy is, go with your gut.

Seriously, my philosophy is, be yourself, and don’t do it if it doesn’t feel like it’s you. With me, what you see and what you read is what you get. I’m not smart enough or, honestly, energetic enough to come up with a fake persona and roll her out any time I speak or tweet or post on Facebook. It’s all just me, and that’s what I’d recommend to any writer dipping a toe into social media. Be yourself, and give your readers something other than just self-promotion. There can (and must be) an element of that: My new book is out now, I’d be delighted if you bought it – but you also have to give the reader something of value, whether that’s live-tweets of the cheesy reality show of your choice or the true story of how your bike was stolen and you got it back.