Remodeling will tear us apart

Months into our home renovation, my husband and I were barely speaking, and the contractor looked awfully cute 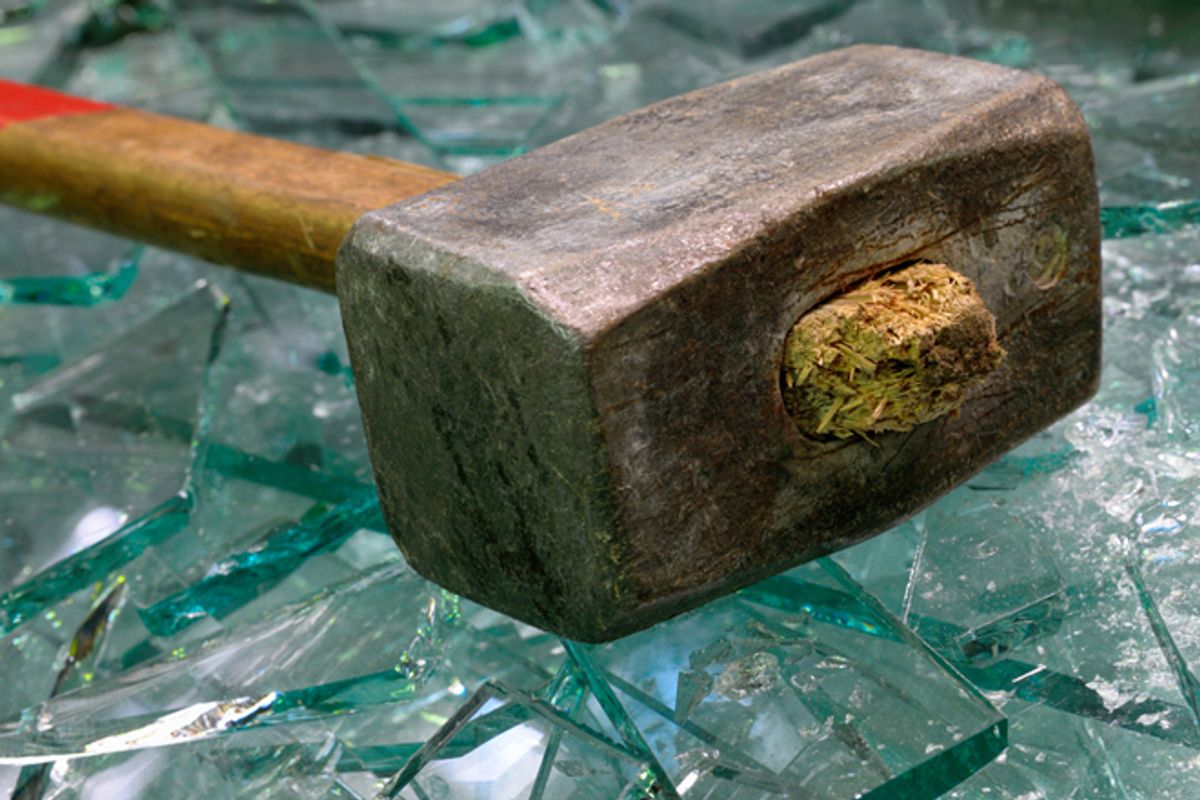 A while ago, I was in the depths of the exhaustion that happens when one’s house is 17 weeks into a remodel, and one has perhaps stupidly decided to stay in that house. In the very back two rooms. Neither my husband nor I was able to bathe, or make ourselves a cup of tea, or figure out where anything was, starting with our winter coats and ending with postage stamps. Worse still, decision fatigue had ground our marital nerve endings into bloody stumps: Brushed stainless or shiny? Round drawer pulls or rectangular?  A 10- or 11-inch counter overhang? We stopped bringing each other our morning toast, started snapping orders as we flew out the door to return tile samples or buy paint before starting our real jobs.

As I watched my husband walk away from the house one morning without having even said good morning, I said glumly to our contractor Charlie, “The only thing that will perk me up today is if you come out back at exactly 11:30 and bring me and my writing students chai tea.”

We laughed. It was a joke, after all. This is a guy with strong opinions on grout and hinges, who disappears his underperforming subcontractors overnight with Gadhafi-like efficiency and derives his daytime nutrition from Marlboro cigarettes. Asking Charlie to bring Indian tea to the building out back where I teach creative writing carried the same odds as asking Newt Gingrich to bring us cupcakes.

Imagine my utter amazement, then, when Charlie showed up in the middle of class with a tray of chais and mochas for my class and me, and then returned with another tray of muffins and pastries. Newly bought.

Every woman in the room gasped. Charlie flashed a wolfish smile, while his eyes sparkled a green like the wave crashing on a beach in Costa Rica with the sun setting behind it (the same exact color as 1-by-2-inch glass tile named SURF currently available at Daltile in Denver for $18.80 a square foot). Oh dear. I’d been counting the days till our contractor would leave. Was it wrong, now, that I hoped he’d never leave?

But I wasn’t the only one ready to slut out over a cup of coffee delivered by a man in a tool belt. My class was all pheromones.

“He is so hot!” whispered the lady who’s been married for 20 years.

A few days after the chai incident, my husband, Peter, put on his tool belt. He had worked for years as a carpenter before he became a psychotherapist, and our shed needed some new siding. He was wearing an old white shirt and some jeans a skidge on the short side. His tool belt had suspenders.

“Don’t you have a regular tool belt?” I asked in a tone more horrified than I’d intended.

Look, life had gotten confusing.  I had been invaded and held hostage, and I had asked for it. Men came in, removed my sink, installed glaring clip-on lights and made me answer dozens of questions a day. My hallway clogged with people I had never met, muttering dire things about my plumbing while they eavesdropped on my phone conversations with my doctor. I resented this, but because these men held the answer to basic life questions like when I would be able to sit on my toilet again, I endowed them with enormous power. On the design front, I was the boss. (As I pointed out to the open-mouthed crew one day, “I am the boss of you!”) But I wasn’t a great boss. I bought the ugliest piece of orange mottled granite in the world for the bathroom, and my husband, whom I had come to view as a vengeful Amish man, commented on this regularly.

It is worth mentioning that there is at least one therapist -- Rachel Cox, unsurprisingly of Palo Alto, Calif. -- who specializes in guiding couples through the unrelenting grind of a house remodeling.

At our renovation’s toughest point, Peter and I were changed from a pair of tea-brewing pacifists into a pair of warring dinosaurs. Our reptilian brains swelled grotesquely. Our once-complementary styles went Jurassic: I stormed into Home Depot up to four times a day, buying armloads of paint samples and craving the relief that only completion could bring. Peter stepped back and considered. Added up columns of numbers. Considered again. I took to burying my head in my hands every time we tried to outline a simple task. Charlie turned to me one day and said, “He’s so avoidant.” I live in Boulder, Colo. Contractors talk that way here, Marlboros or no.

Not long after Peter started wearing his tool belt, I am happy to say that the renovation reached its natural end. Circular saws were loaded back on trucks. Molding was installed around windows. Our new, naturally lit, joyfully colored home took shape from the rubble and Peter and I realized that we had made it. That Charlie had done an amazing, masterly job. That we had made good decisions. Who knew I had it in me to design a really nice bathroom that captured exactly the “Downton Abbey”-meets-the-Joker look that I’d wanted? Who knew that Peter could do the same for the porch?

As the exhaustion receded, I saw that my husband had not just been inward and slow as a deliberate ploy to frustrate his impatient wife. He had been keeping tabs on things – holding us to our budget, preventing the whole show from running off the rails.

And I also saw that all along, Peter had met Charlie’s strong opinions, blow for blow. My dharma-teaching, nonviolent communicator of a husband who has dedicated his whole life to nonharm went out there and kicked some serious bootie. Peter is gentle, but that doesn’t mean he was a pushover who couldn’t stare down Charlie the contractor. So he re-measured the sink. Pointed out the 3-inch error that had been made. Didn’t settle for Charlie’s admission that he may have been off by half an inch. “Nope,” said the husband who was at that moment fresh home from a meditation retreat in the desert, where he taught people to see their anger as ephemeral and impersonal. “That was a 3-inch error you made there.”  Met the sea green SURF eyes with his own hazel ones.

And in our new, empty, clean house, I found myself saying:  “Honey, come here.”

Lisa Jones lives and teaches creative writing in Boulder, Colorado. She is the author of "BROKEN: A Love Story," about her friendship with quadriplegic Northern Arapaho horse trainer and traditional healer Stanford Addison.