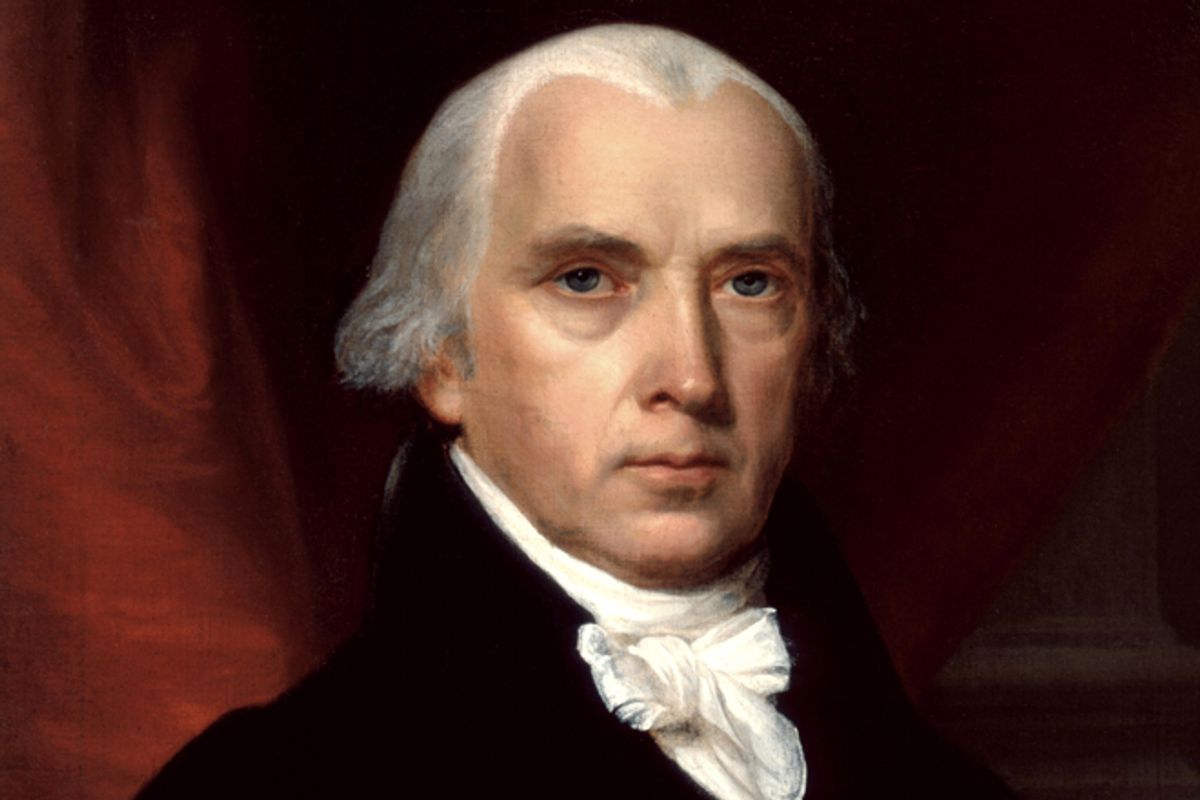 The U.S. Constitution was hammered out by sensible men who understood the political necessity of compromise. After “monarchy,” no term in their vocabulary conjured as much fear and loathing as “parties.” That’s right, the framers guided us (or so they thought) toward a system wherein no “head of a party” would be able to emerge, because only men with elevated minds would be elevated to high office, men who were motivated by the principle that formed parties could only corrupt the morals of the entire community. The “good of all” would prevail in rational deliberations.

To be perfectly clear, then, the Constitution did not make any provision for the emergence of organized political parties. While understanding enough about human nature to design checks and balances into the system with three offsetting branches of government, its architects were also counting on a certain amount of public spiritedness coming from educated men. That is why the second highest vote getter in each presidential contest became, in defeat, vice president. It’s ludicrous to us, of course, until you realize that in 1787, our government was called by everyone associated with it, “an experiment.”

How, then, would the framers view the bile-filled conversations that take place in Congress and over the airwaves today? Actually, they did not have to wait very long to find out. In the early 1790s, Secretary of the Treasury Alexander Hamilton was the first to make the case of those who today call themselves conservative and want the government to make life easy for big corporations through deregulation. He got the ball rolling by encouraging wealthy speculators to scoop up, at tremendous discount, the securities (government certificates) held by Revolutionary War veterans. With the power of a compliant congressional majority behind him, he was about to make the rich richer, which included a good many members of Congress. In so doing, he guaranteed long-term support for the “experimental” central government from his loyal speculator friends.

Speaking out against this reciprocal back-scratching, and speaking up for the victimized farmer-veterans, then-Congressman James Madison took the position we associate with today’s Democrats. He declared in 1792 that Hamilton’s scheme was unethical, and that government should instead act to “reduce extreme wealth” and nudge the fledgling economy toward a fair and equitable distribution of resources – advocating, to render his sentiment in modern terms, a stable middle class.

The political world inhabited by the Revolutionary generation is necessarily unlike ours, yet certain of their impulses are proven prototypes of modern political dilemmas. Take the challenge, “Who does government really represent?” This is the common thread across the centuries, and it’s not yet decided.

The Madison-Hamilton distinction is a prominent example of the class-based dimension to American political history that is exposed, over and over, in competing attitudes toward the rich and favored few and the cause of justice for ordinary citizens. We feel frustrated today not because of declension from the superior Age of Reason of the founding generation, but rather because of our similarity to them in the irrational nature of our hopes and fears. Both the right and the left see the harrowing prospect of losing power. Long-term catastrophe always appears within the realm of possibility. “What will happen to the environment?” “Is another crash coming?” “What will it mean to me?” Every election is a referendum. Our politics are about unrealized expectations that breed passions and wild scenarios.

It is the human passions that explain the logic behind the founders’ establishment of the Electoral College, another telling symbol of enduring stresses within our governing system. Why did they saddle us with such a convoluted instrument? Why not a simple popular vote? The answer has to do with their perception that the people at large weren’t trustworthy. The framers wanted the best and brightest of each locality to submit a widely recognized name, a trustworthy judge of the common good. Each state could decide for itself through popular vote or (more likely) by choice in the state legislature, who its electors would be. The presidential elector was, of course, not bound to a party, because organized parties did not exist yet, nor were they expected to arise. Similarly, the U.S. Senate was comprised of men elected in state legislatures, not by popular vote – that only changed in 1912.

In the founding era, the voting public was composed of propertied white men. Enough Revolutionaries were so distrustful of popular opinion that they wanted to prevent those citizens from voting who were too easily manipulated by demagoguery, as in: if Jefferson is elected, he will outlaw the Christian religion. (Flash forward: Barack Hussein Obama isn’t really an American.) Ergo, the original Electoral College, which scarcely registered popular will and gravitated against a popular vote.

Madison’s and Jefferson’s efforts in the 1790s to stop Hamilton by forming what their opponents called an anti-administration faction (what we now call the Democratic Party) was not about extending democracy. It grew directly out of a fear that the republic was endangered by the marriage of national politicians and the wealthiest one percent, who were not job creators but gamblers.

It doesn’t take a genius to know what James Madison would think of the lobbying industry. Or focus groups. Or robo-calls. Granted, we shouldn’t expect, or even desire, our presidential campaigns to resemble the United States of old. But Madison’s principle was right: Money was not meant to be employed in persuading someone how to vote. Once you do that, you’re not really a democracy, or even a republic, anymore. We don’t need to resurrect a founder to tell us that we need to make public financing of campaigns happen.

The question the framers of the Constitution weighed still crops up from time to time: Do we want people voting who don’t understand their own interests? Is freedom sacrificed when voters are swayed by smooth-talking salesmen representing the self-perpetuating moneyed class? Maybe the principle behind the Electoral College isn’t quite as obscure and antiquated as one might think. It was designed to bypass those who were unable to discern for themselves what was at stake in their lives. That is why the word “democracy” meant something akin to anarchy or mob rule to our forebears. Their Tea Party, the Boston event, was put in the hands of the recognized leaders of the patriot movement, to calculate just how far people should be allowed to go to make their point. The American Revolution was not a social revolution. The colonial elite became the post-Revolutionary elite. All they did was to get rid of Britain’s governing authority.

Our founders were liberals looking for humane government and conservatives aiming to maintain social stability (the latter of which conveys the legitimate principle behind Hamilton’s unequal policies). Yes, they had their Hamiltonian power-consolidating prerogative. But Hamilton was tame compared to Dick Cheney, who made Halliburton’s sweetheart deals happen, not to mention the whole Iraq debacle, when he went from the Defense Department to Halliburton to the vice presidency.

So it’s really a matter of scale. In Madisonian relief, today’s political fundraising industry is a giant corruption of republican principle, plain and simple. The founding era saw local politicians practice “treating” on the campaign trail, which was supplying alcoholic beverages to fire up the crowd at a stump speech; but it didn’t do the kind of harm our unrestrained system does today.

Past practices may still be with us, as ancient debates persist.  But let’s face it, things have gotten way out of hand. Gerrymandering (a founder’s invention) secures reliably Democratic and reliably Republican congressional districts in every state. And what of those sinister Republican state initiatives to disenfranchise likely Democratic voters under the guise of voter fraud prevention? Do they think they’re fooling anyone? We claim that we have “free and fair” elections, and self-righteously send observers abroad to monitor countries that are struggling to establish decency in government. There’s a certain amount of hypocrisy here.

Need more? Scientific polls basically inform you whether or not you need to even show up on Election Day. But that’s nothing compared to the most unrepublican, undemocratic practice of 2012: American politicians should not be bought by private interests, no matter how it’s rationalized.